Ask Heidi and Frank today, and they can't imagine living anywhere else in Philly but Fairmount. But a few years ago, if you had asked Frank where he'd prefer to settle down, Rittenhouse Square would have been at the top of his list. The Dutch man fell in love with the Center City neighborhood while in Philly for a work trip. That's also when he met Heidi, who moved to Fairmount after graduating from Temple University and never left. 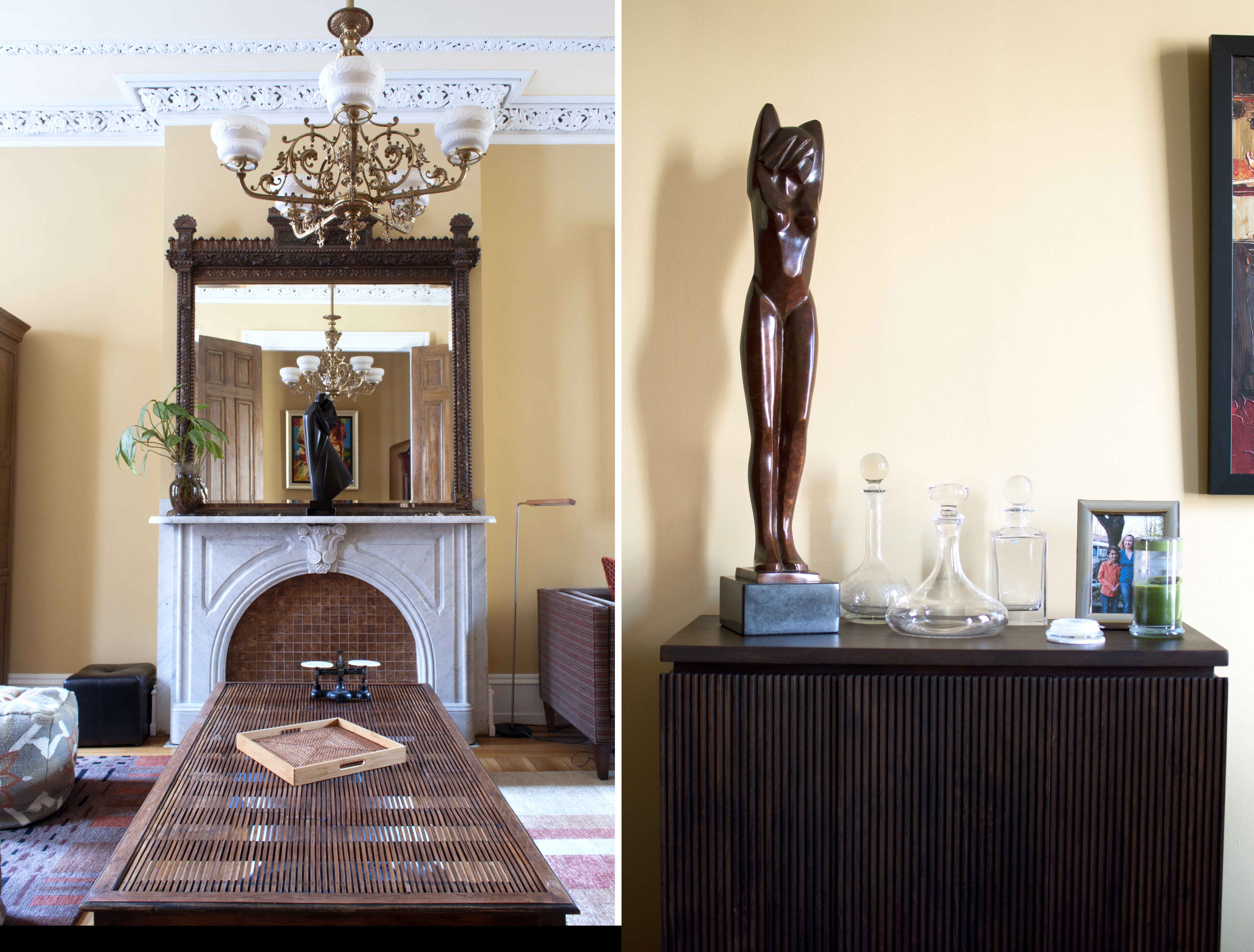 Left: The grand living room in Heidi and Frank's Fairmount home features a non-working marble fireplace. The chandelier, mirror, and crown molding are original to the home. Right: Sculptures created by Frank's mom, an artist in Holland, are found throughout the home.

"When we started looking at places in Rittenhouse, I just kept thinking about finding a new dry cleaning place and having to leave my friends and meet new neighbors," Heidi recalls.

But there was one thing the new couple could agree on: They needed a home big enough for their newly combined family of seven. To make things work, the duo needed the right home for their five kids, who varied in ages from middle school to college.

They seriously considered a few homes in Rittenhouse, but when a historic 1860s Fairmount rowhome with a large side yard became available, Heidi knew it was the perfect old home for their new family. The owner at the time was recently widowed, and the 5-bedroom, 4.5-bath home was just too large for her to take care of on her own.

"It wasn't exactly our style," says Heidi, "but we recognized that it had an amazing amount of potential." 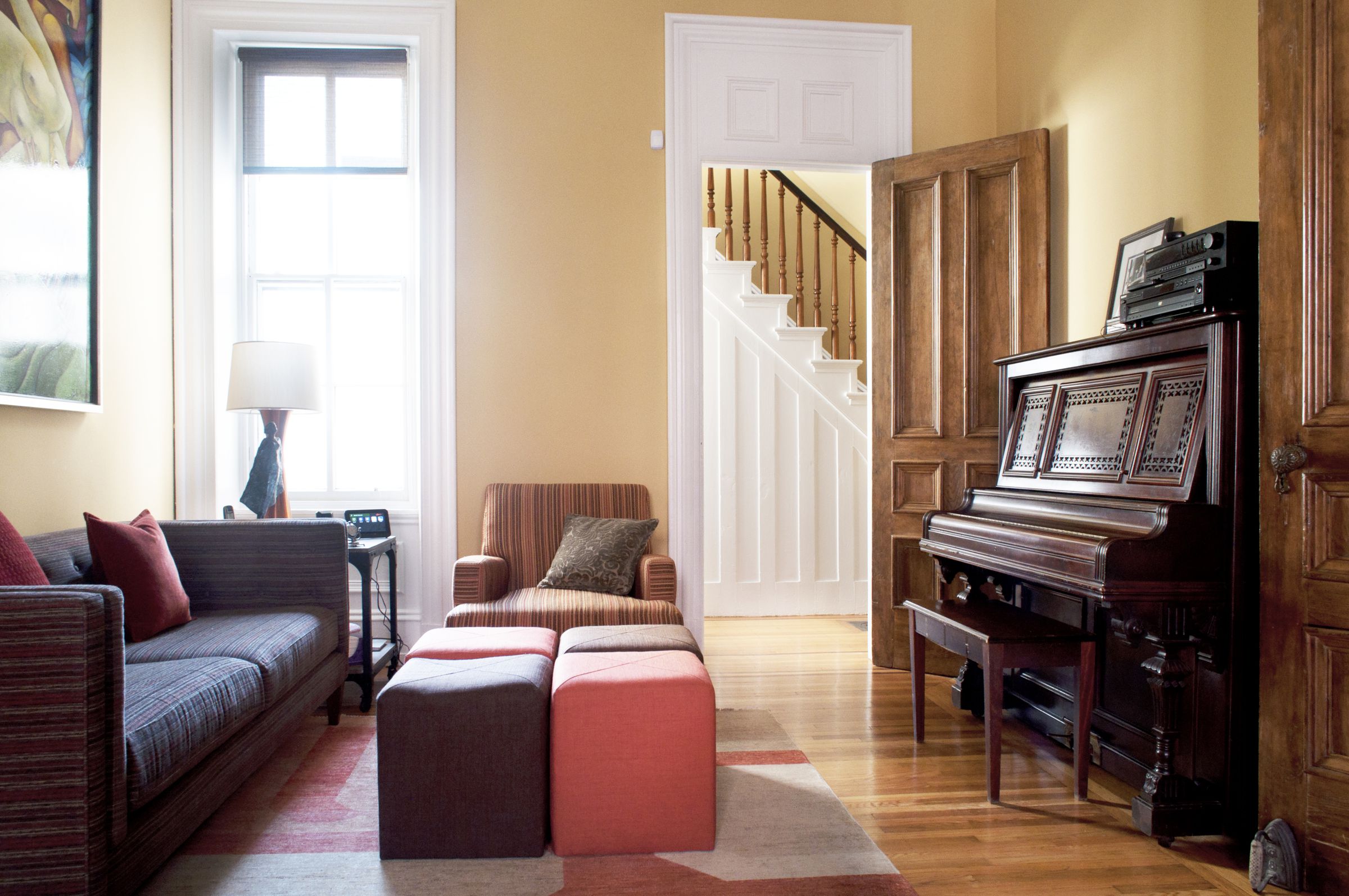 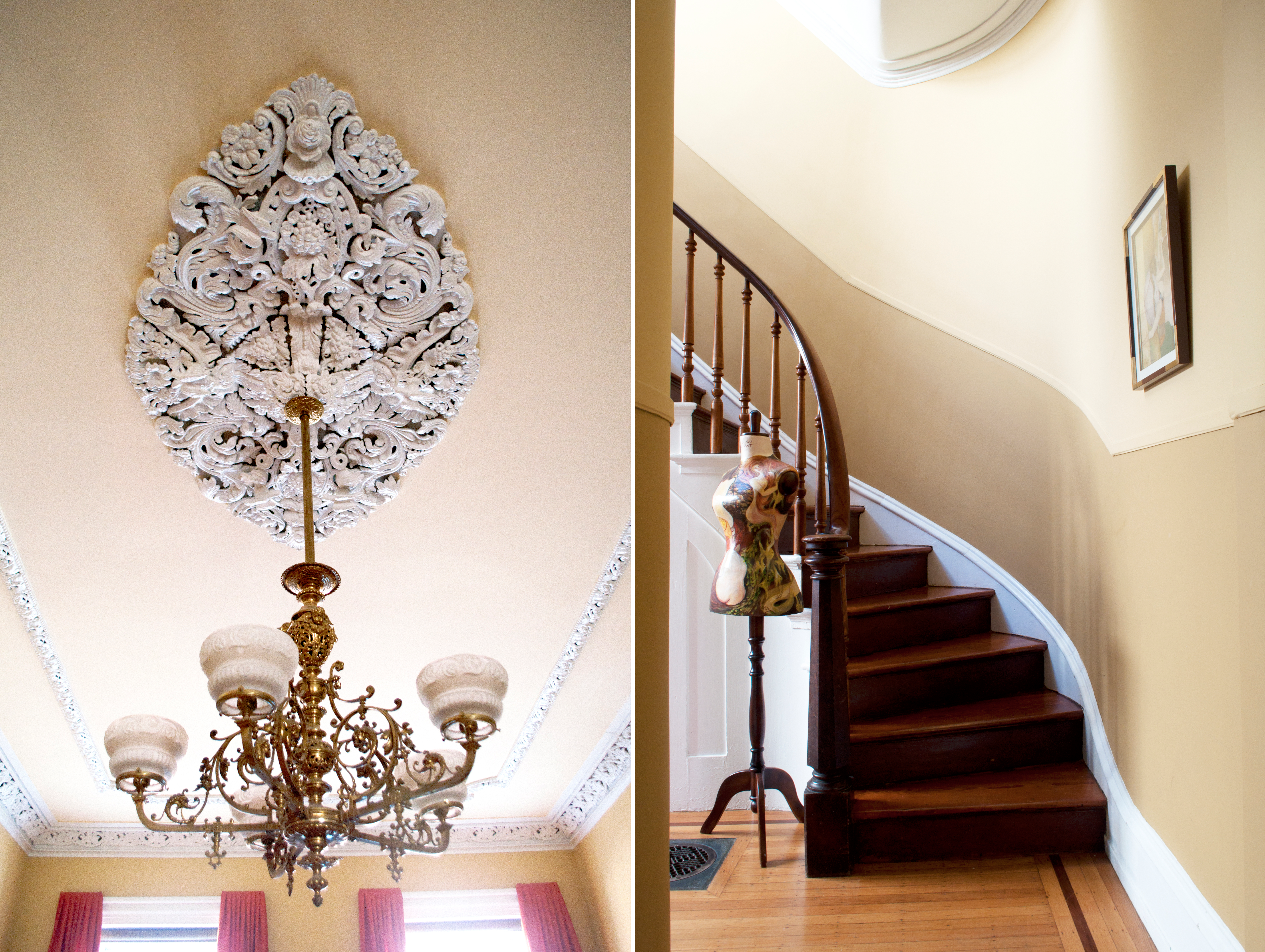 Clockwise from top: The large living area opens to the stairwell, one of Heidi's favorite features about the home. Some of the crown molding had to be re-plastered when Heidi and Frank bought their home.

And so began months of renovations and restorations, with the help of local interior designer Amy Cuker of down2earth design and general contractor Alan Henderson. "Design is not my forte," says Heidi, so she asked Cuker to give her four options to choose from for every renovation decision. "I just had no idea what I was doing," says Heidi, "so this process really worked out well for us."

First, they knew they wanted to maintain the historic home's architectural details, including the intricate crown molding in the grand living room and the fine woodwork throughout. The crown molding was in pretty good shape, though they did have some parts re-plastered. And the windows in the dining room, while original to the property, actually passed air leak test with flying colors.

But they also wanted to incorporate their modern style into the home. The kitchen was completely gutted; they had to remove a staircase where the oven now stands, and they took down a wall to create a more open floor plan to the sunny family room.

An energy-efficient home was also important to them, so Heidi and Frank asked for sustainable features and to use of reclaimed wood whenever possible. The kitchen island and shelving unit were made by local woodworker John Stack out of wood panels that were reclaimed from a bank’s interior. Floors in the kitchen and family room are made of cork, a green and ergonomically forgiving material. 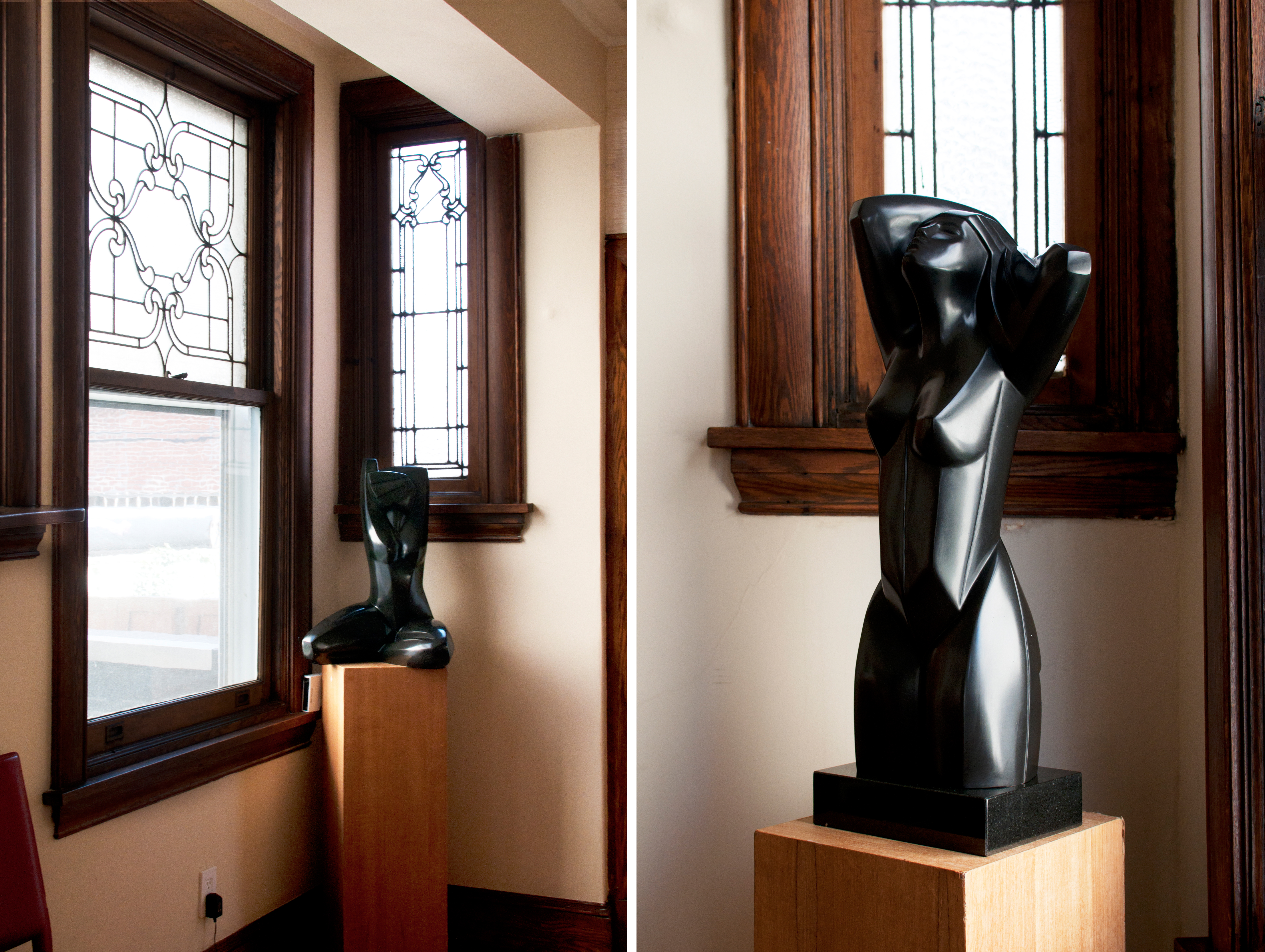 Although the couple thought they'd have to replace the old windows in the dining room, a heating test revealed that the originals were in good shape.

The roof even features solar panels, and the home has geothermal heating. In the kitchen and master bath, concrete counters, sourced by a Wilmington fabricator, sit atop custom cabinets built by a Lancaster craftsman (Heidi grew up in Lancaster).

On the upper levels, they renovated the jack-and-jill rooms into a mix of bedrooms, offices, and bathrooms. One of their daughters snagged a large bedroom with its own full-bathroom. Cuker saved the clawfoot tub, while adding a sleek glass shower stall. The bright wallpaper added some pop to the room. 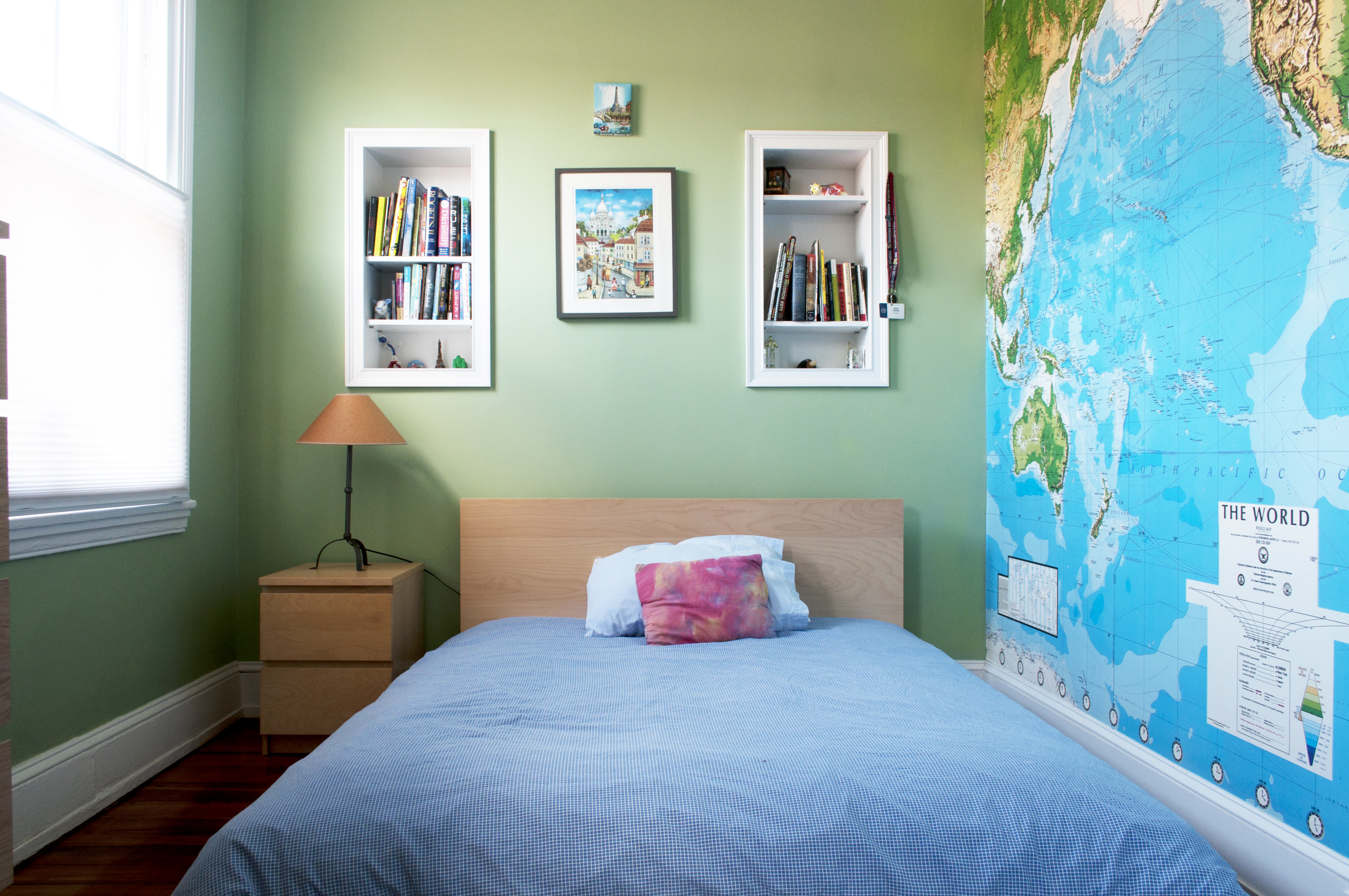 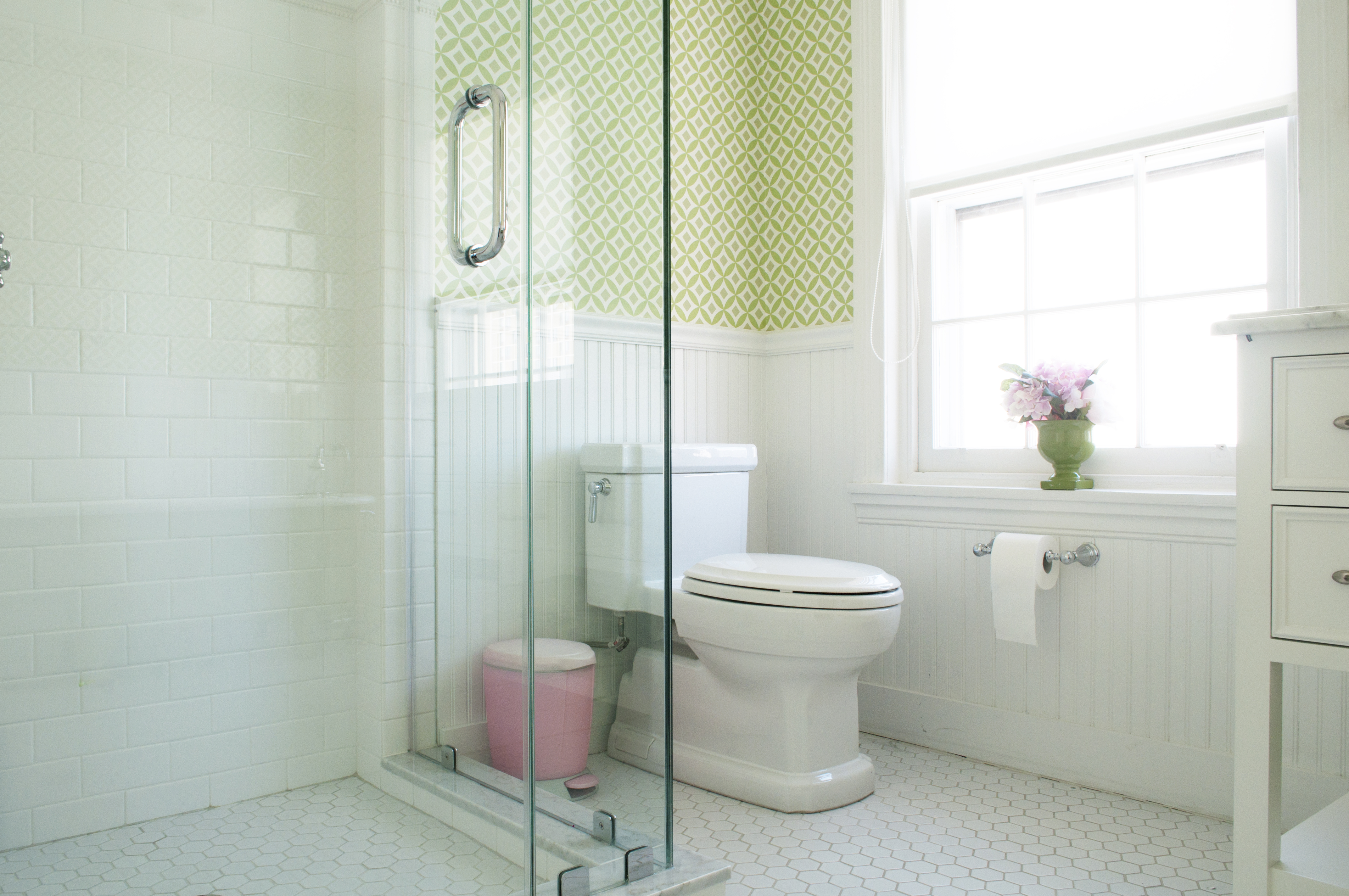 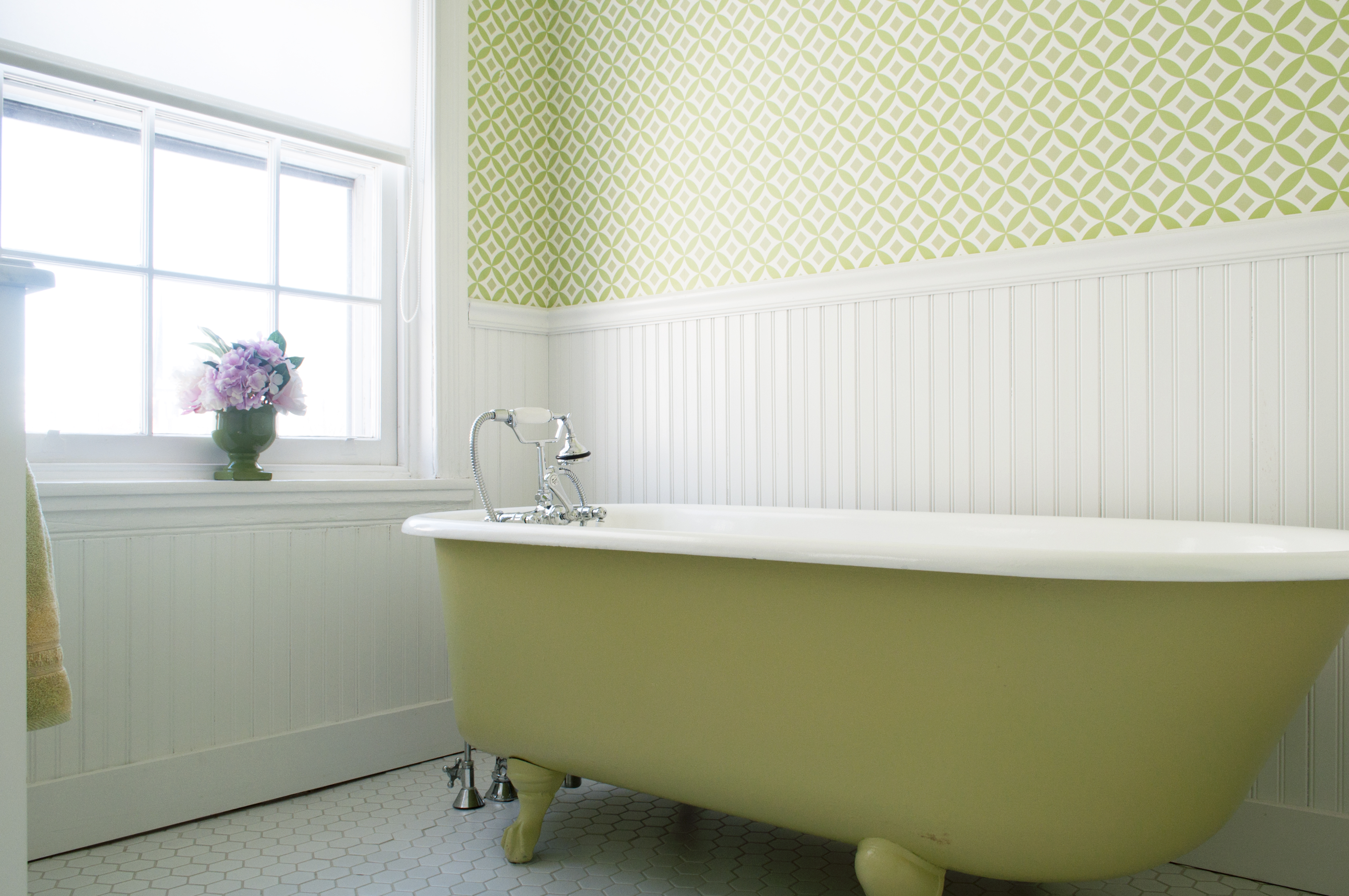 The home clocks in a 5,000-some square feet, but Heidi and Frank acknowledge that the space will seem even bigger once all of their kids are out of the house. For now, it's the perfect size, and fit for family functionality. "There are so many spaces you can retreat to when you just need some alone time," says Frank, who works from home.

Not that that happens often. Though it was a quiet day in April when the couple opened up their home, their children's friends are often around, and the family spends plenty of time together outside. They own the side lot, which features a deck, fire pit, and a parking space. And Frank's mom, who is 81 and whose sculptures are found throughout their home, visits often from Holland. "She loves it here," says Frank.

"Even the former owner of our home didn't want to leave Fairmount—she bought a place on the same block," says Heidi. "It's just the best place to live."