After 15 years of neglect, standing as a symbol of blight on the corner of North Broad and Fairmount Avenue, it's clear to the naked eye that the graffiti-laden Divine Lorraine is on the cusp of beginning a new chapter for itself and North Broad.

Today, the North Broad Street side of the hulking building of the Gilded Age is covered in a sheet of black as construction workers restore the scaffolding and install new windows. Large signs with red lettering hang down, beckoning future residents to its doors. "Live in a Landmark," it reads. "Now Leasing for late 2016."

It's been years in the making, but the historic Divine Lorraine is finally making its much-needed comeback. Under developer Eric Blumenfeld's watch, the 10-story building is currently in the middle of a $44 million renovation that will result in 121 apartments, 20,000 square feet of restaurants and retail, a speakeasy, a fitness center, and a residential lounge.

From the Gilded Age to Decay

When the apartments do open at the end of the year—the retail aspect will follow—the Divine Lorraine will return to its late 19th century roots as an apartment building. Designed by architect Willis G. Hale and built in 1894, the Romanesque beauty opened its doors as the luxurious Lorraine Apartments, serving the so-called "new rich" of the manufacturing boom, many who had been pushed out of Rittenhouse Square by old money elite.

In 1900 it ran as a hotel until the Great Depression. It's during this time that the opulent building began to fall into disrepair, until Father Major Jealous Divine bought it in 1948.

Divine was the somewhat controversial founder of the International Peace Mission Movement. Under his ownership, the building earned its current moniker and became the first racially-integrated hotel for people of all races and classes in the country. 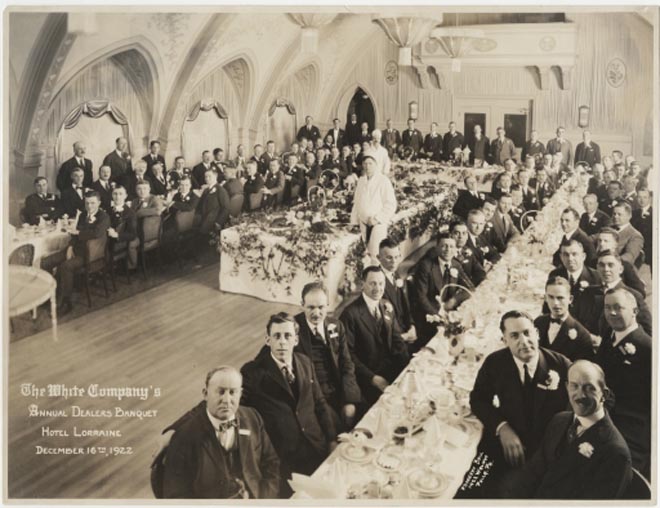 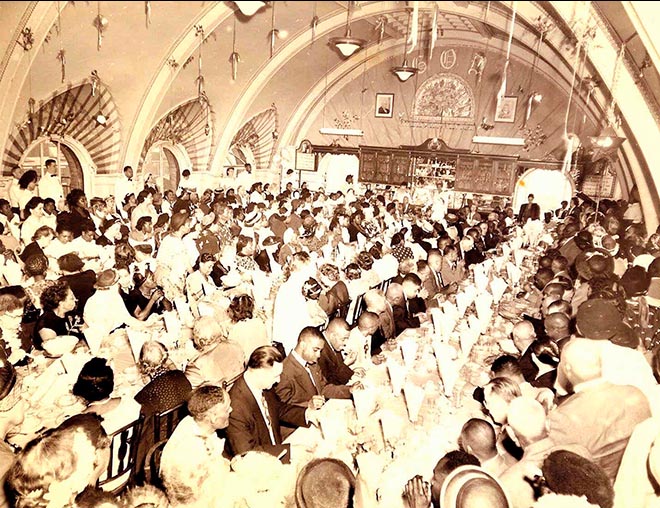 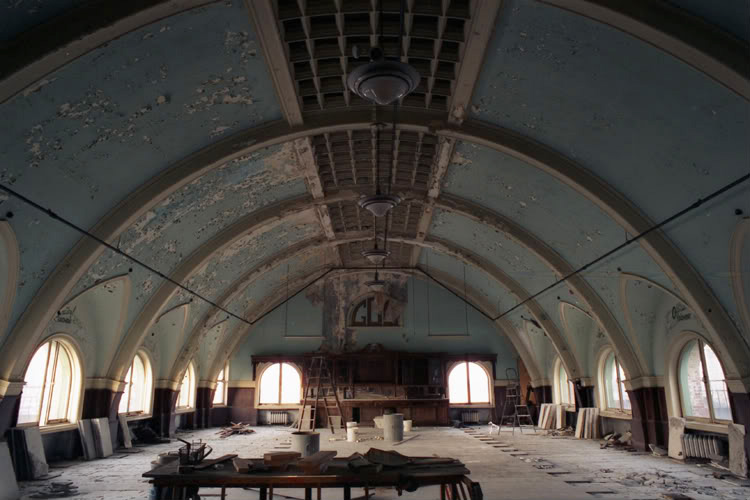 Left: The 10th floor of the Divine Lorraine featured penthouse ballrooms that served as dining halls when it was a apartment and hotel. Right: When Father Major Jealous Divine took over in 1948, he turned the ballrooms into worship halls. Bottom: The 10th floor in 2013, before the entire building was completely gutted. Photos courtesy of the Divine Lorraine and Flickr user geoff dude.

But unlike its initial years, modesty was the key during the Divine era. The grand penthouse ballrooms turned into worship halls, and it became a dry building where smoking and profanity were strictly prohibited.

After Divine's death in 1965, the worshippers of his movement continued to run the property until its doors officially closed in 1999.

Ed Casella, regional property manager of EB Realty Management, ticks off a long list of factors that played into the Divine Lorraine's quick demise over the past 15 years: "It was exposed to the elements, theft, the disadvantaged living here, graffiti, and whatever else was going on here," he says. "So yeah, it’s gotten beaten up."

But things are looking up in a big way. An exclusive tour of the building yesterday offered a taste of what to expect from living in the Divine Lorraine. Although they're aiming to have apartments ready by the end of 2016, much of the building is still very much a construction zone, with crews working on every single floor.

After the September 2015 groundbreaking, work immediately began on the ninth floor, likely because it was in the best shape. Today, the floor is completely built out, with some kitchen and bathroom cabinets and faucets already installed. The finishes include granite counter tops and birch cabinets, and exposed brick will be in nearly every unit. Windows are currently being installed in each unit, painted in the Kelly green color of the originals.

"We went with traditional finishes," says Casella. "But we brought in modern finishes and fixtures, too, so there's a really nice dynamic at play." 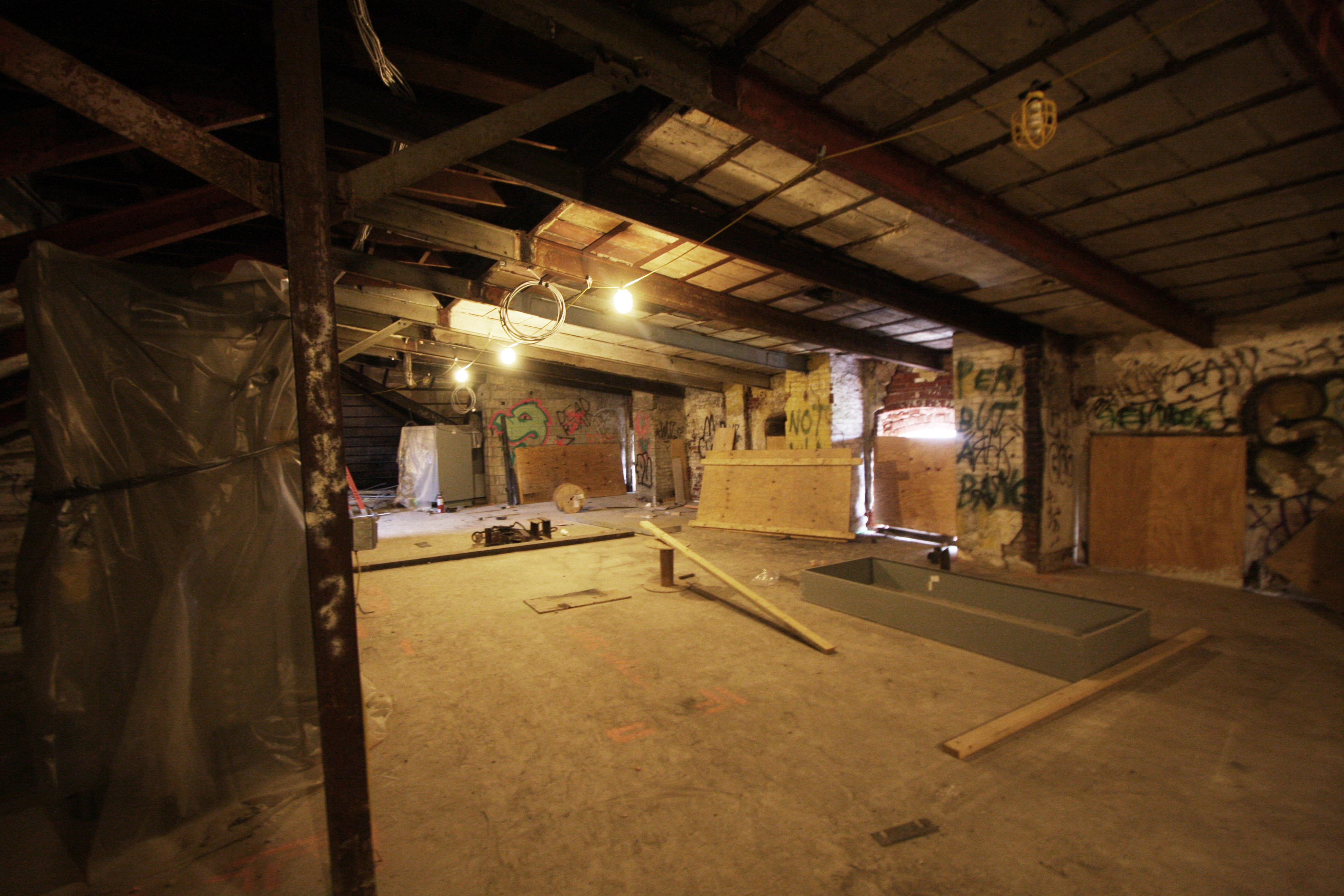 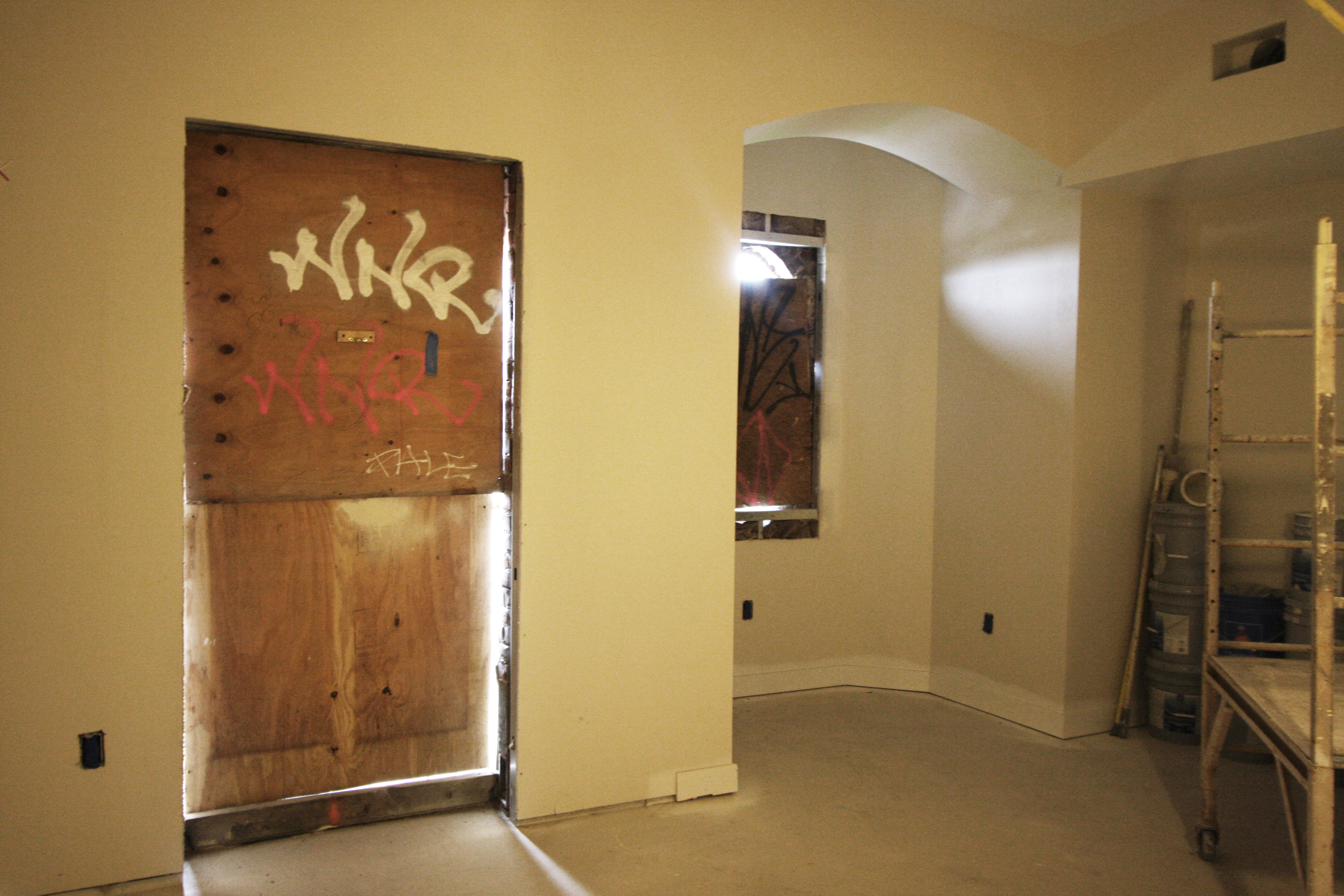 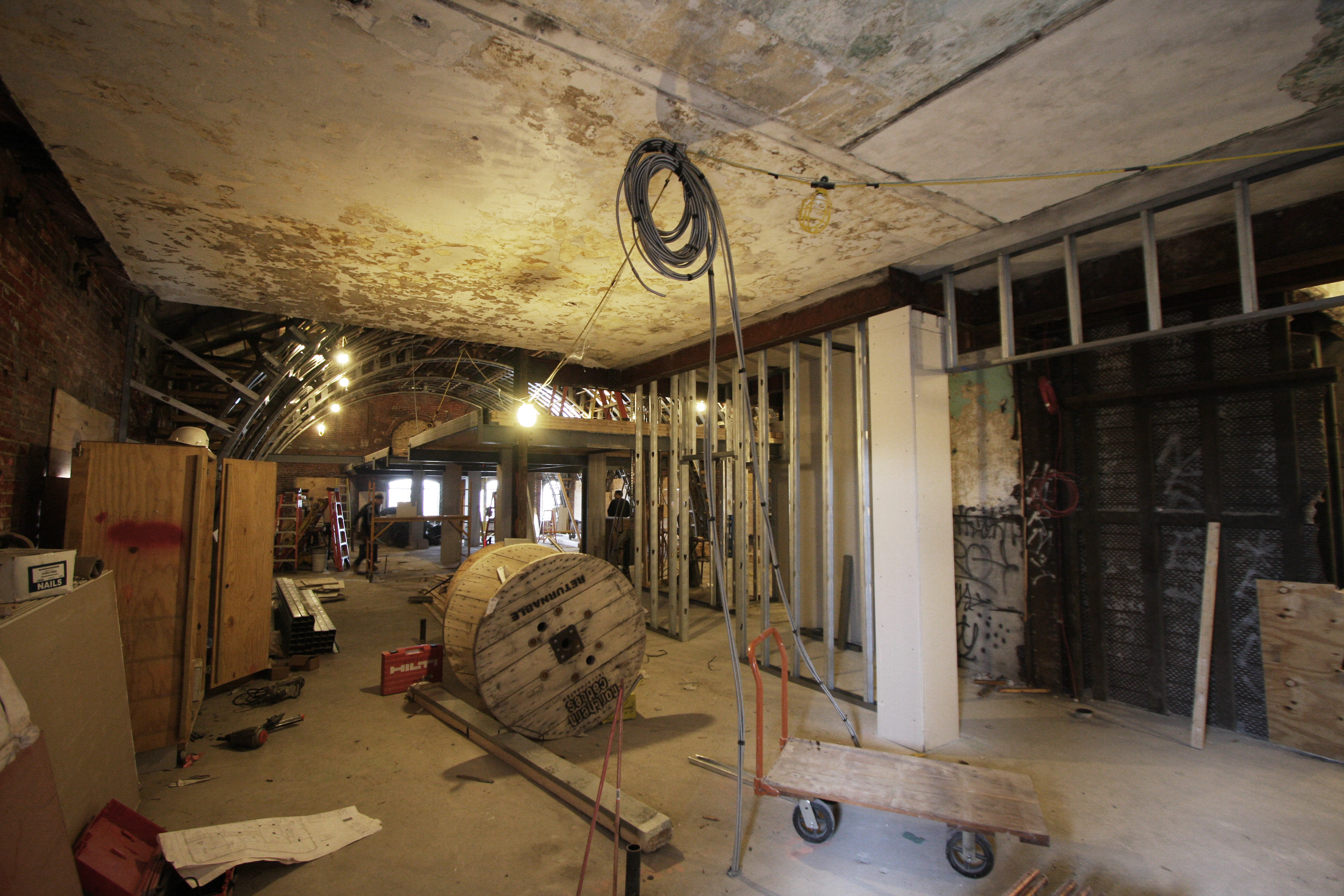 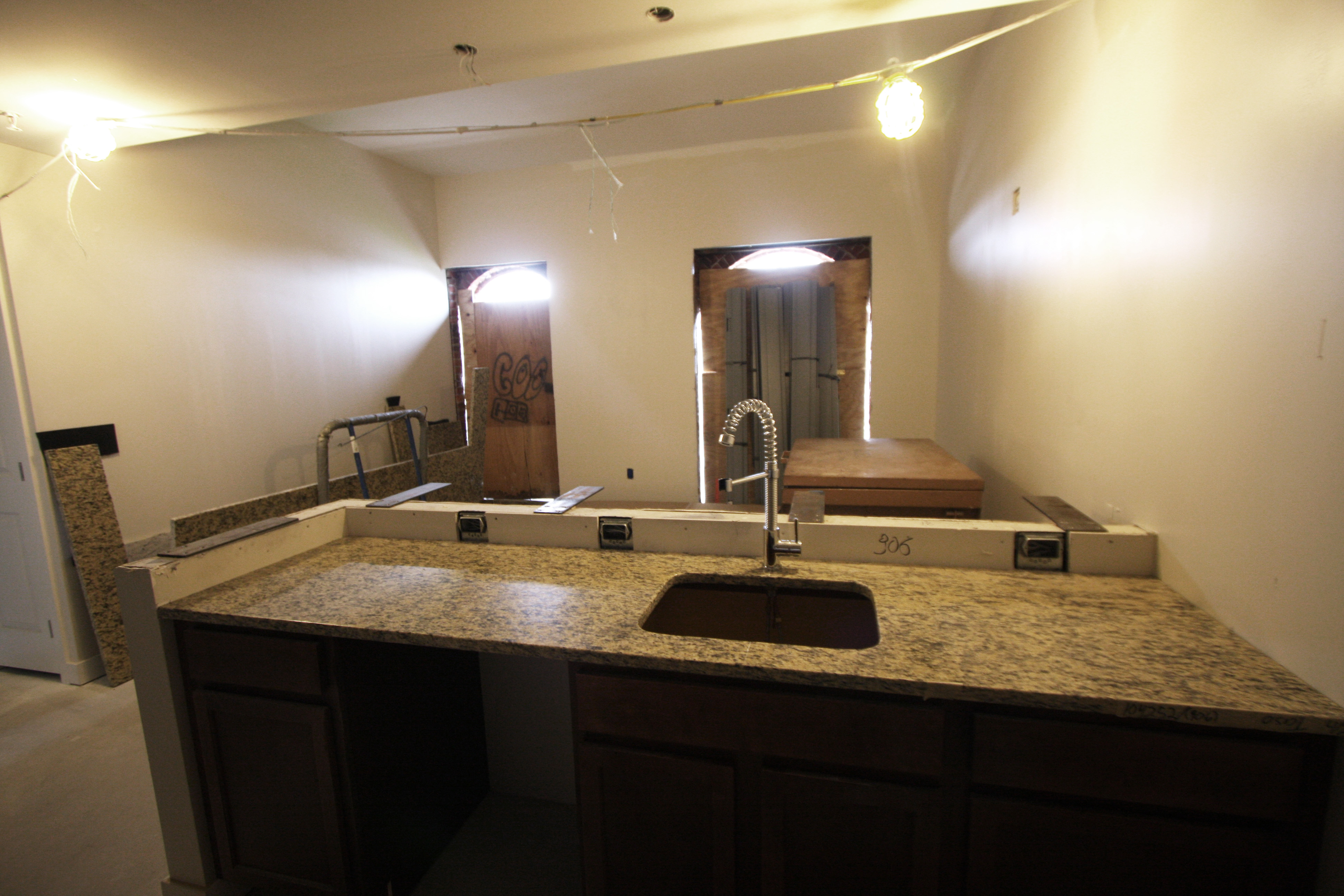 Clockwise, from left to right: The 11th floor, which used to hold elevator machinery, will be converted into two walk-up apartments; The apartments that face the back of the building will feature breakfast nooks; The units will feature finishes like granite countertops and birch cabinets; The 10th floor, formerly the grand penthouse ballrooms, will include bi-level apartments.

A majority of the apartments will each have their own private balconies that will be restored, many of them looking out to the interior courtyard. One unique feature of some of the 2-bedroom units will be a nook off the master bedrooms. "There were a couple of floors that connected via this passageway that allowed us to implement the dens into the rooms," Casella explains.

The iconic 10th floor, which features vaulted ceilings and served as the banquet and worship halls during its hey day, is being turned into bi-level apartments. And a little-known 11th floor, which once housed elevator machinery, will feature two walk-up apartments.

Top: The view from one of the master bedrooms, looking out toward the inner courtyard. Nearly every unit in the building will have a balcony. Bottom: Looking toward the entrance of the Divine Lorraine from the lobby's front desk.

In the grand lobby, or what Casella describes as an "above-ground Titanic," the plan is to take out the front desk and replace it with a circular version with a large chandelier. The ornate moldings and damaged columns throughout will be re-plastered. "This is not going to be a cheap knock off—we’re doing it the right way," says Casella, who adds that they've been working with a historical consultant to ensure that all of the architectural details are restored to their original grandeur.

And like during the Divine era, there's no niche market that Casella's looking for in terms of future tenants. With the smaller units and low rental prices—the 1-bedroom units start in the low $1,300s—young professionals will likely fit the bill. Then again, adds Casella, "There are other people who have lived in the area for so long and know the history. We’re catering to the masses here, and we're really fortunate to have a building that has a cult following."

Says Casella, "We really just want to pay homage to the building by giving it a new life. It's a special place—an icon."

15 renovation apps to know for your next project

Renovation Week Recap: What You May Have Missed This Week

View all stories in Renovation Week