A Couple's Modern Home is a Spacious Oasis in Hawthorne

From his condo in Hawthorne, Stuart often stared out to the two oddly shaped homes on the corner across the street. An abandoned L-shaped building, which had turned into a squatter’s residence, spooned another brick home that was infested with termites and debris.

"There was a homeless man living in this garage for $270 a month with a bucket and a hose," recalls Stuart on a recent day in June, standing in the garage-turned foyer.

For two years Stuart, who works in health care sales, imagined what he could do with the two run-down properties. With a little bit of nudging from a close friend in the real estate business, he eventually managed to buy the corner homes. With the help of a 301K construction loan and a local architect from a now defunct firm, Stuart had the red brick house torn down and combined the L-shaped home with a new build. He lived on the second-floor apartment, while renting out the bottom apartment to help pay off his mortgage. 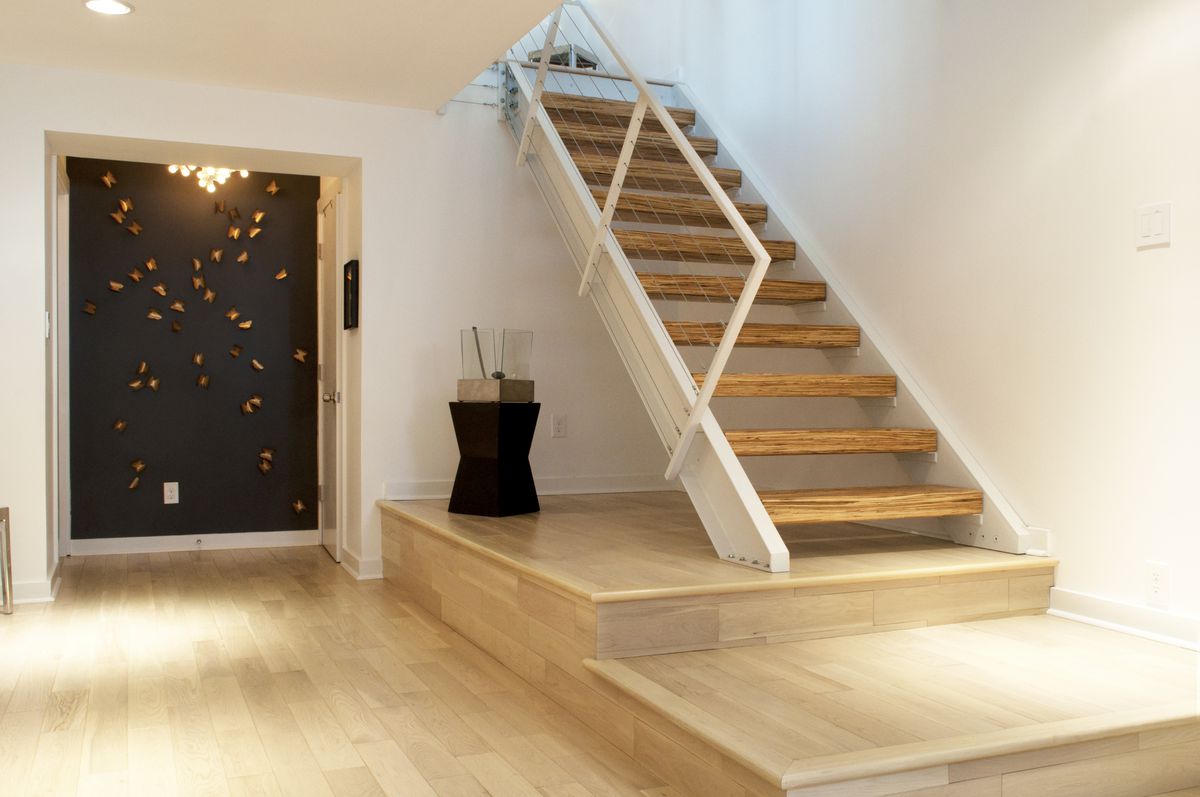 The stairs in the foyer were modeled after the staircase in the local restaurant Vernick and designed by En-Motion Design.

But the renovation wasn’t easy. Stuart had to work with the local neighborhood association, receive zoning approval, and "cross a lot of T's and cross a lot of I's." And then, there was the two-week hiatus when they discovered bones at the construction site."Turns out it they were just animal bones," Stuart reassures.

The two-week crime scene isn't the twist in Stuart's story, though.

Stuart (left) and Mike (right) met in Baltimore. Today, they live together in a newly renovated home in Hawthorne.

The couple met in their hometown of Baltimore, until Stuart moved to Philadelphia. For years, they managed their long-distance relationship, spending time in Stuart's new home. But when Mike made the move to Philly, they knew they needed more space.

Real estate prices in their neighborhood were nowhere near what they had been when Stuart bought the properties, however. Their quick(ish) fix: Combine the first and second-floor units into one new home. Says Stuart, "It was important to find a design that we both liked. We needed to make this not my house, but our house."

The two worked with architect Chris Kirchner from Metcalfe, designer Michael Jackson of En-Motion Design, and a general contractor named Jonathan Delise. Jackson designed the garage door and the stairs, which are finished wooden beams and modeled after the steps in the restaurant Vernick. 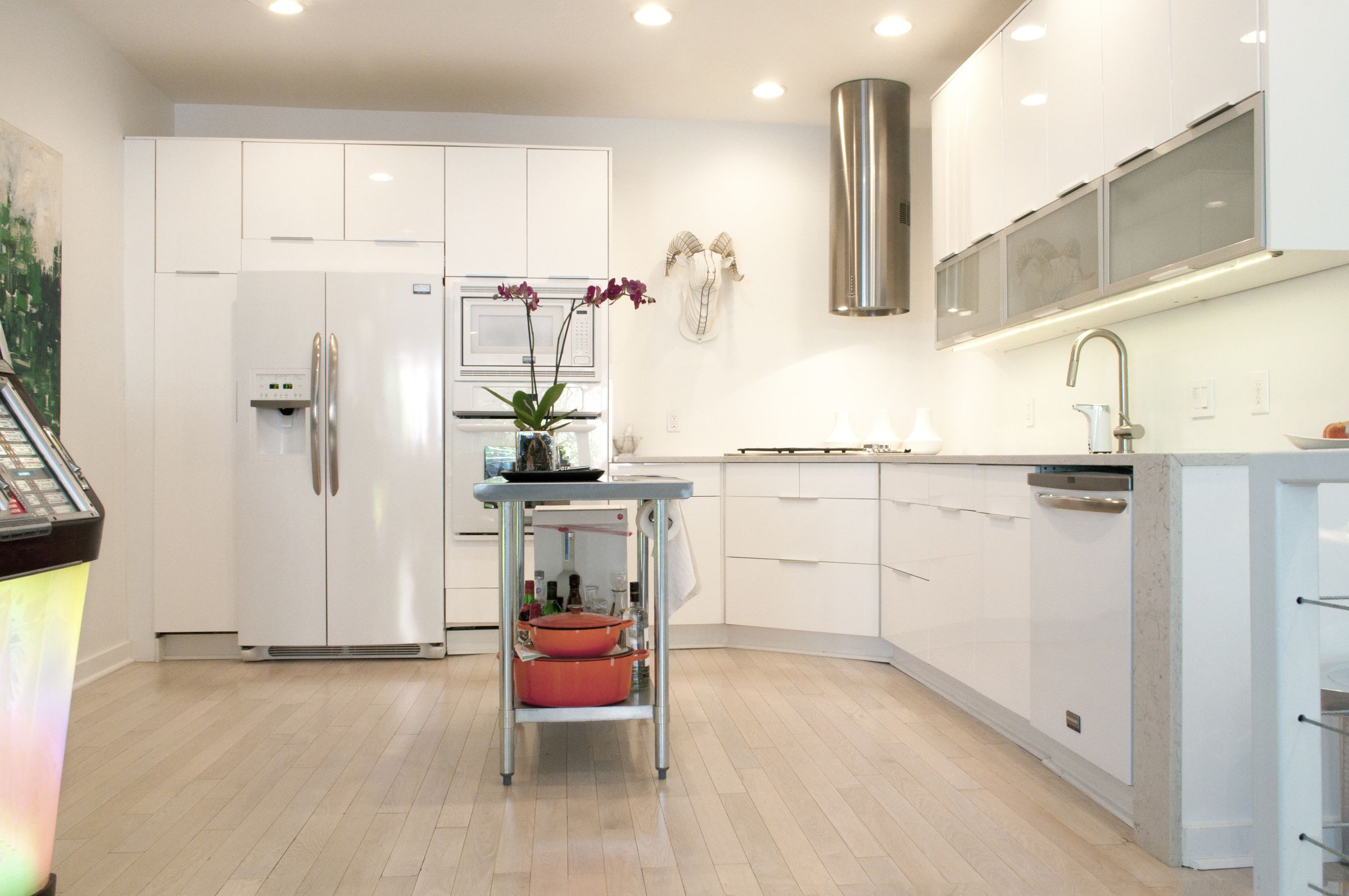 Top: The orange chair is from an old dining table set from Stuart's family. It's a favorite place for their two dogs to curl up. Bottom: "We love to cook," says Stuart. He took a photo of a Poggen Pohl kitchen to IKEA and had a similar space designed for a fraction of the cost.

Today, the 2,800-square-foot home is a stylish and spacious 3-bedroom, 2.5-bath property with two offices, a sleek white kitchen, a garage, and a terrace off the second-floor living area. Stuart says it was important for the terrace, which is made of Trex wood-alternative material, to be right off the main floor.

"We love that the outdoor space is connected to the main level. If we’re barbecuing, we don't have to go up a flight of stairs to a roof deck or through a private space," says Stuart. "People say they use their roof decks once or twice a year—we use ours once or twice a week."

Even more, the couple has a tale to tell about nearly every piece of furniture or artwork in their home. Says Mike, who works in IT in Malvern, "All of the pieces are either from a moment on vacation or Stuart has had them for long that he has a story about them."

The artwork, for example, was all created by Stuart, who says he's always had an affinity for painting. The butterfly installation in the foyer, for example, are the result of soda can cut-outs that were spray-painted gold. 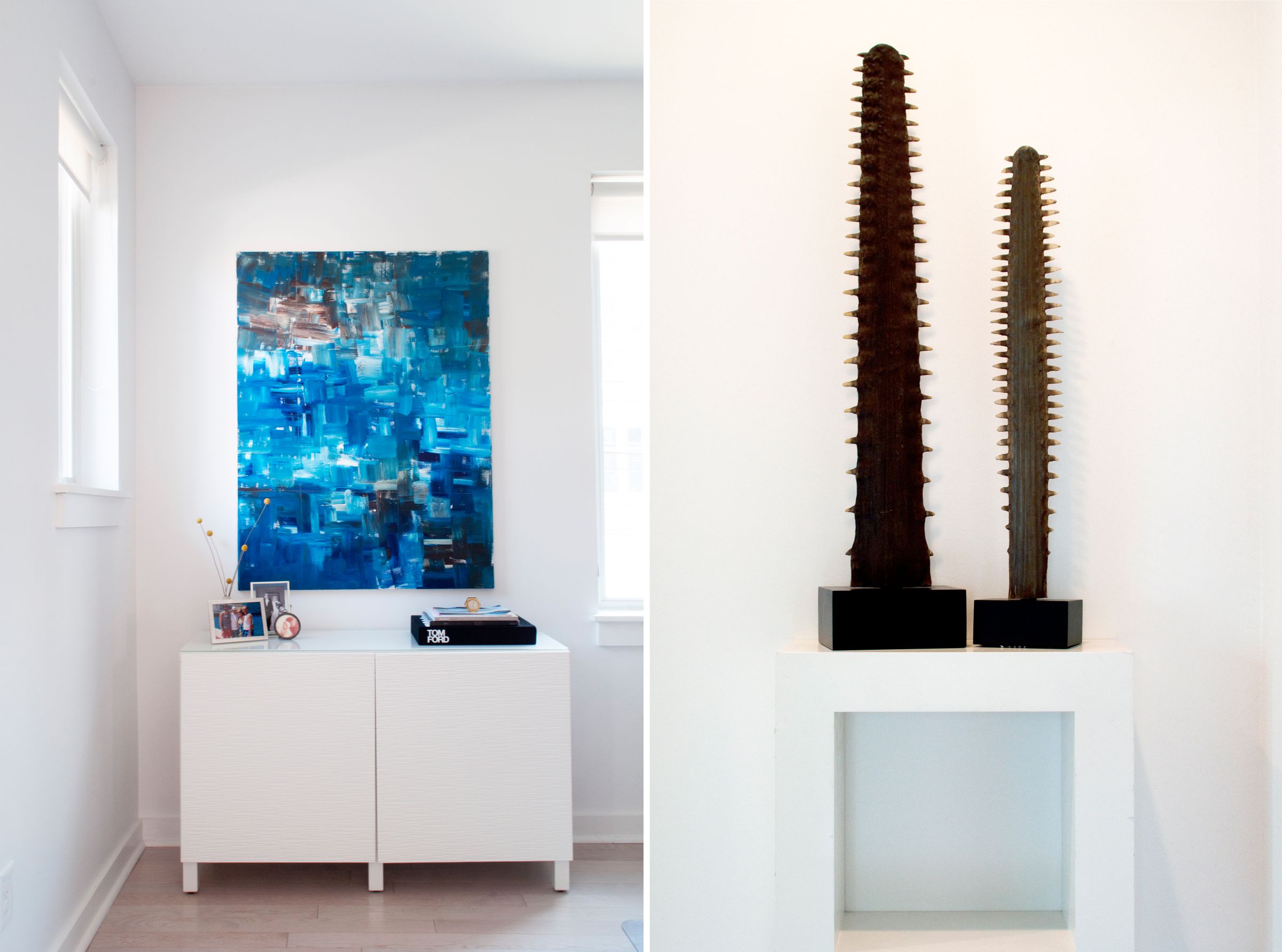 Left: Stuart and Mike each have their respective hobbies. Stuart paints, while Mike trains for triathlons. Right: Stuart bought these sawfish noses from a jeweler who used them to hang necklaces.

Then there’s the horse collar-turned-mirror in the foyer. The couple was out to dinner at a restaurant in Rehoboth Beach, Delaware when the mirror caught their eye in the bathroom. "We asked the waiter if they'd sell the mirror to us," says Stuart.

"We went in for dinner and walked out with that," adds Mike.

But the biggest statement piece is the restored juke box that sits in the center of the second floor. When the architects learned of this piece, which was refurbished by Stuart's dad, they designed it as the main focal point of the second floor. "It helps divide up the room and it's so much fun at parties," says Stuart. 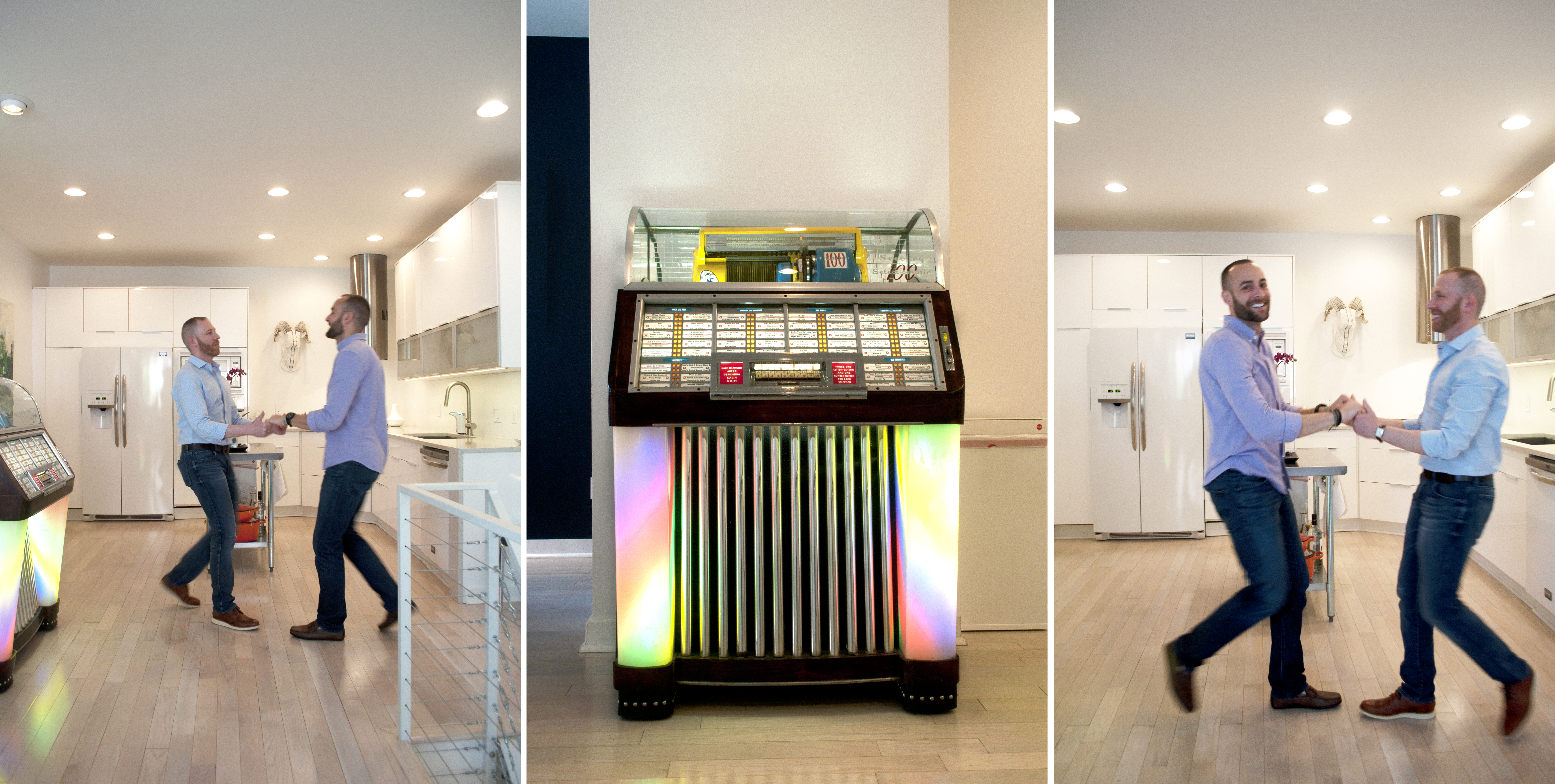 Left: Stuart's dad refurbishes juke boxes as a hobby. The architects used it as a main focal point of the home.

Their home has become a popular place to stay when friends and family come to town. It helps that the first floor, with its own bedroom, full bathroom, and kitchenette, serves as a separate living space for guests.

"We have friends stay here all the time who aren’t city people," says Mike. "They always have concerns about being in the city, but once they see the neighborhood and the house they say, 'This is totally doable. It's like living in a BnB."

Renovating a Historic Home in Fairmount

Take a tour of a historic Fairmount home that newlyweds renovated to fit the needs of their growing family.