By Melissa Romero Updated May 17, 2019, 1:15pm EDT
Photography Courtesy of Mark Havens
2 comments / new
Part of The Curbed Guide to the Jersey Shore

Mark Havens likens his summer vacations at Wildwood Beach to celebrating the holidays. "We used to drive around and see all of the interesting signage and colors the way people would drive around and look at Christmas lights during the holidays," the Philly-based photographer recalls. Summer of 2016 marked the 45th year that his family vacationed down at the small barrier island at the tip of southern New Jersey.

It also marks a decade since Havens began documenting the many retro motels that dot the the shore town. It wasn't until the late 1990s and early 2000s when the buildings began disappearing to make room for big builds and condos that Havens realized that the town's unusual and campy structures were in fact midcentury modern treasures.

"I was always conscious that they were there as a sort of backdrop of things. But I don’t think it was until they started getting demolished in favor of condominiums that I started to realize that they’re not as removable as the landscape—that they may not be there in the future," Havens says. "So that’s what set me on the road to start documenting them."

Ten years later, in 2016, he published Out of Season: The Vanishing Architecture of Wildwoods, a 220-page compilation of all of the midcentury modern motels that Havens could shoot from dawn to dusk—before they were demolished.

At the time of publication, a third of the hotels included in the book no longer exist. 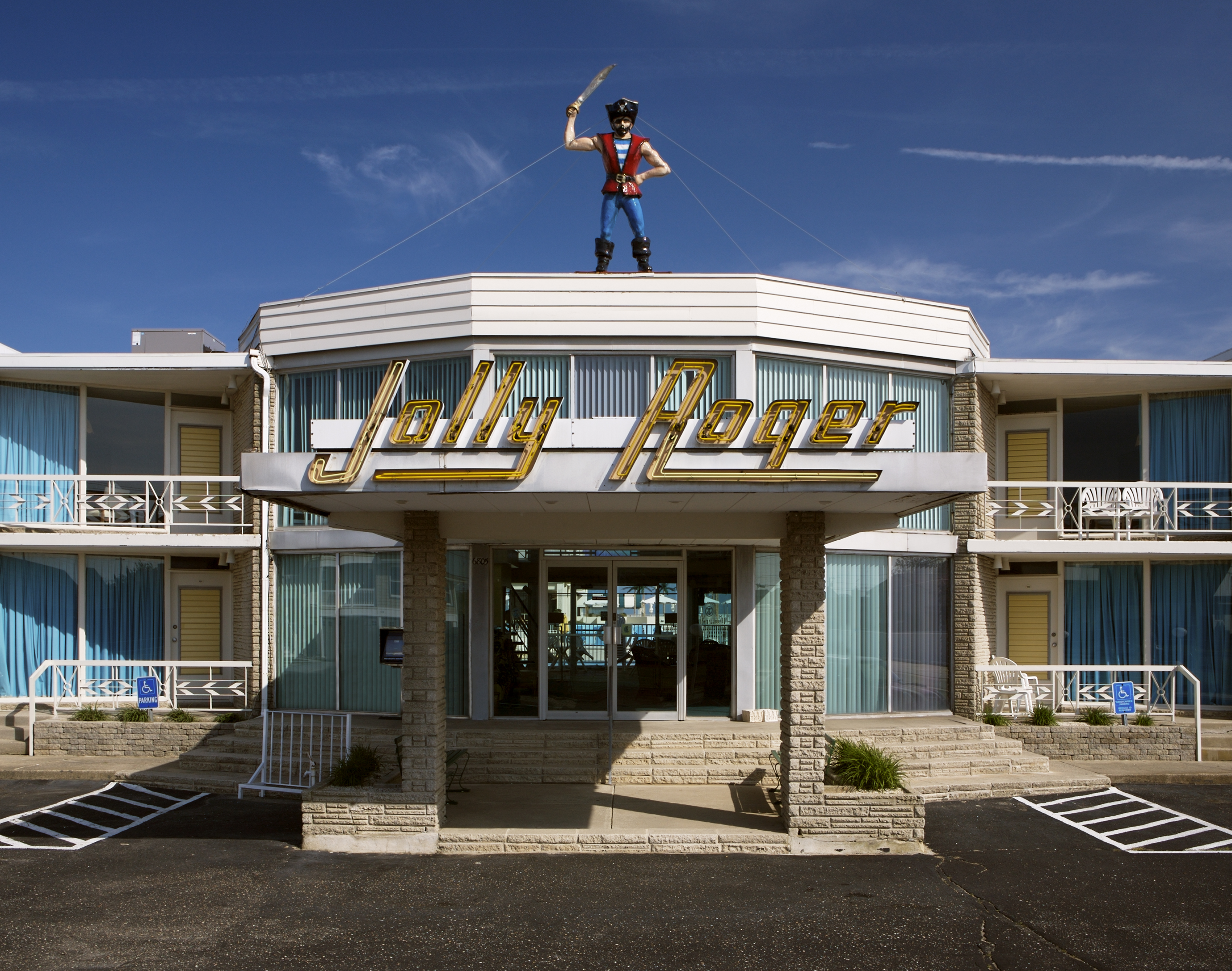 Wildwood, New Jersey, first left its mark on midcentury modern architecture during the 1950s and ’60s, when Miami-based developers began eyeing the town's beach resort potential as construction of the Garden State Parkway neared completion. "The Parkway not only opened up Wildwood but also generated a new building type and an entire ecosystem inspired by, and dependent on, the car," writes Joseph Giovanni in an essay for Out of Season.

What worked in Miami—bright-colored, three-story boarding houses with efficiency units centered around kidney-shaped pools—also seemed to succeed in the Mid-Atlantic. As Giovanni writes, "The goal was not to feel poor together but rich together."

Middle-class families who couldn't afford a trip to luxury resorts in Asia could instead pack up the station wagon, hop on the parkway, and find themselves staying at Wildwood's Caribbean motel, which was built in 1957 and featured an iconic cantilevered ramp and sun deck. Those not able to make the trip to Hawaii could spend a week in the sun at the Kuna Kai, which glowed in neon lights at night and boasted fake palm trees.

The goal was not to feel poor together but rich together

The result of the motel building boom was an architectural style sometimes referred to as "Googie," which sprang out of Los Angeles during the 1950s and ’60s and was brought to Wildwood by Wilbert Morey, whom the New York Times referred to as the "pioneer of shore kitsch."

As essayist Jamer Hunt describes it, "If all that Wildwood showcased was luscious signs and kooky names, the style would be strictly superficial and forgettable—a boardwalk of empty calories. Instead, the motels reveal a depth of decorative minimalism that is both rigorous and whimsical." 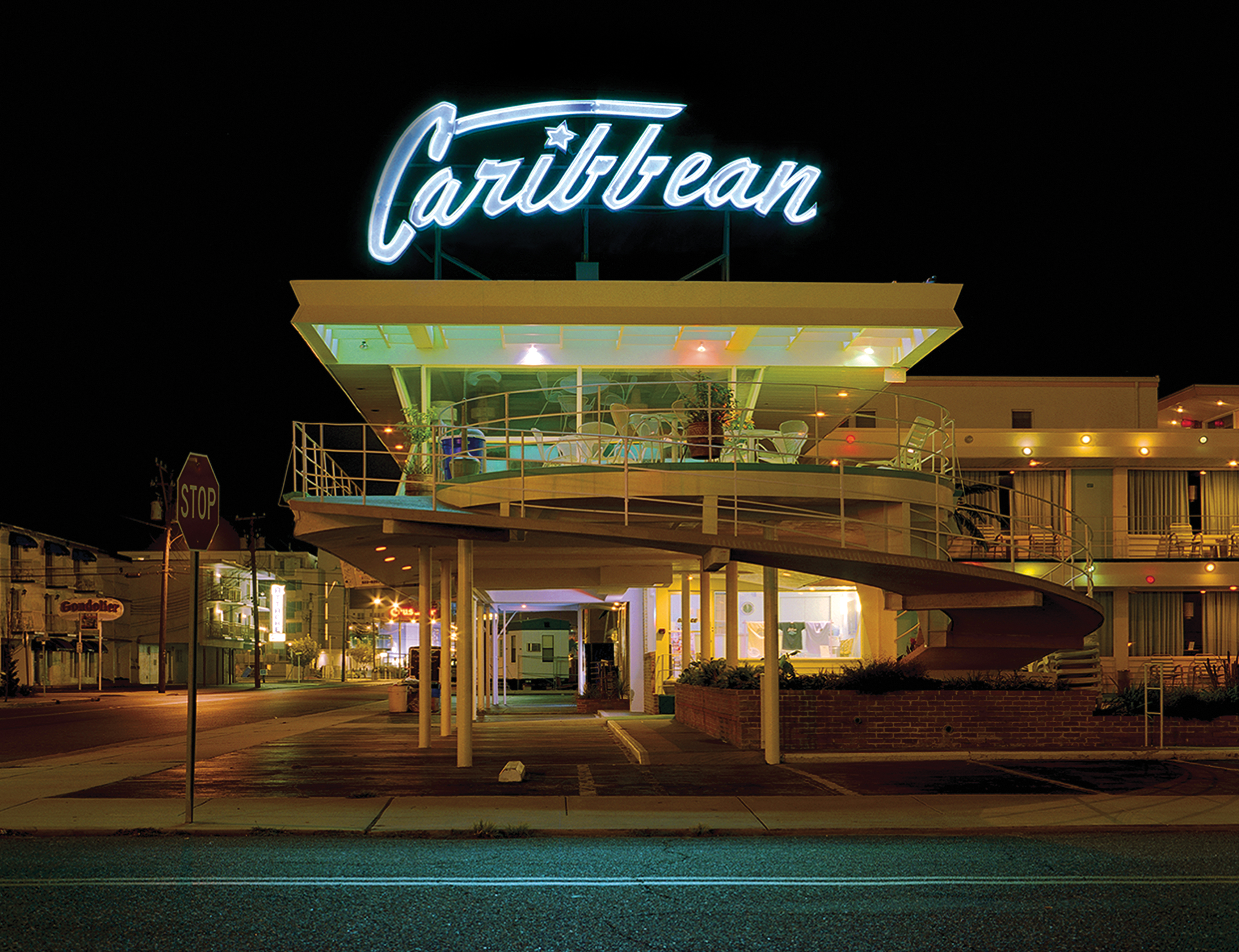 But as in most building-boom stories, there inevitably came a bust: Ultimately, the bold and brash designs of Wildwood's motels were considered more over-the-top than architecturally significant. By the 1970s, the lure of the motel-vacation declined, with visitors' preferences leaning more toward condos.

In fact, a majority of the motels saw their last days just before the housing bust. From 2003 to 2006, more than 50 structures were demolished to make way for condominiums, according to Saving Places. And the buildings lucky enough to stay standing were stripped of their flair while undergoing conversions into condos, or what Havens calls "condo-ized." 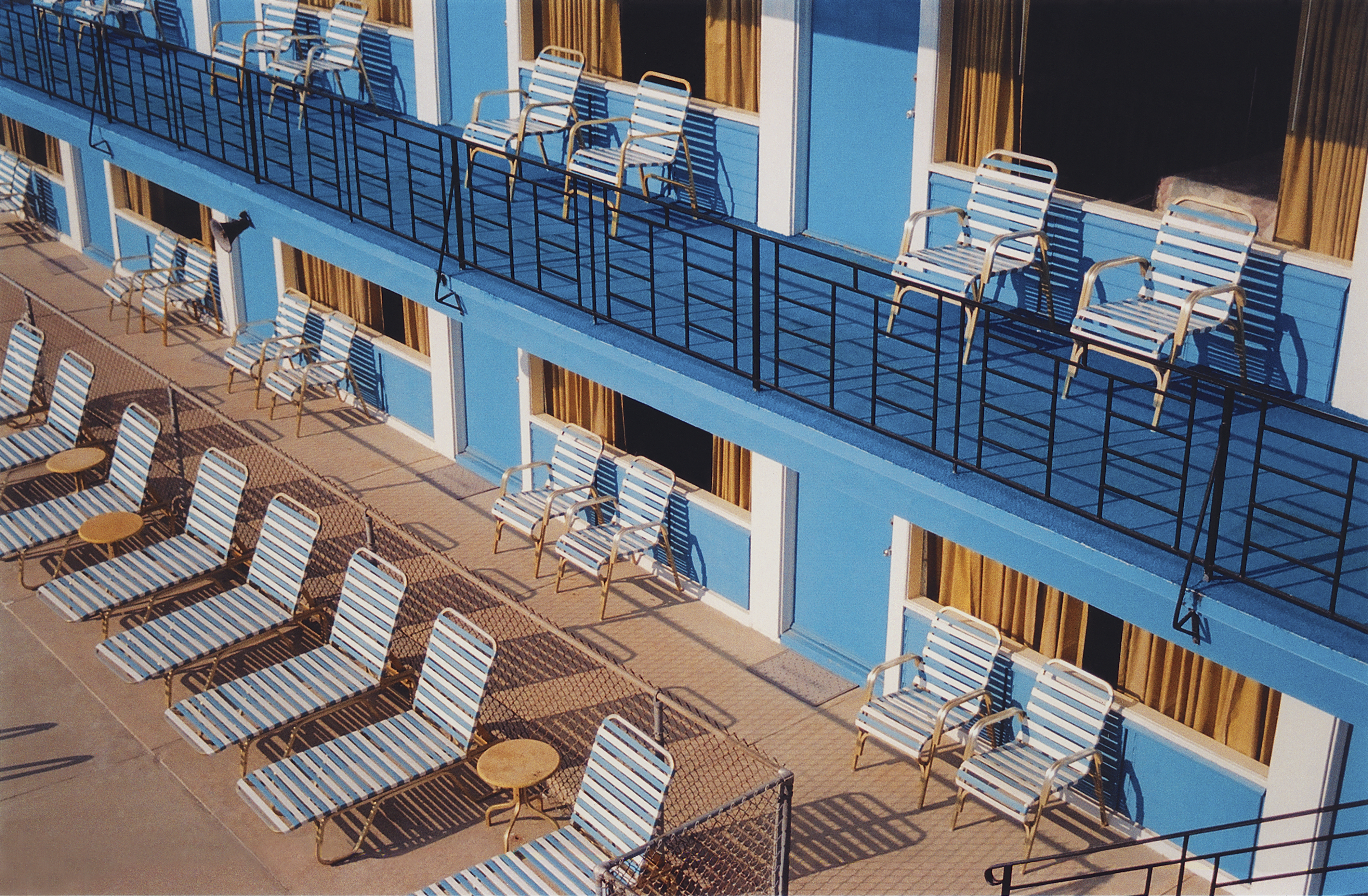 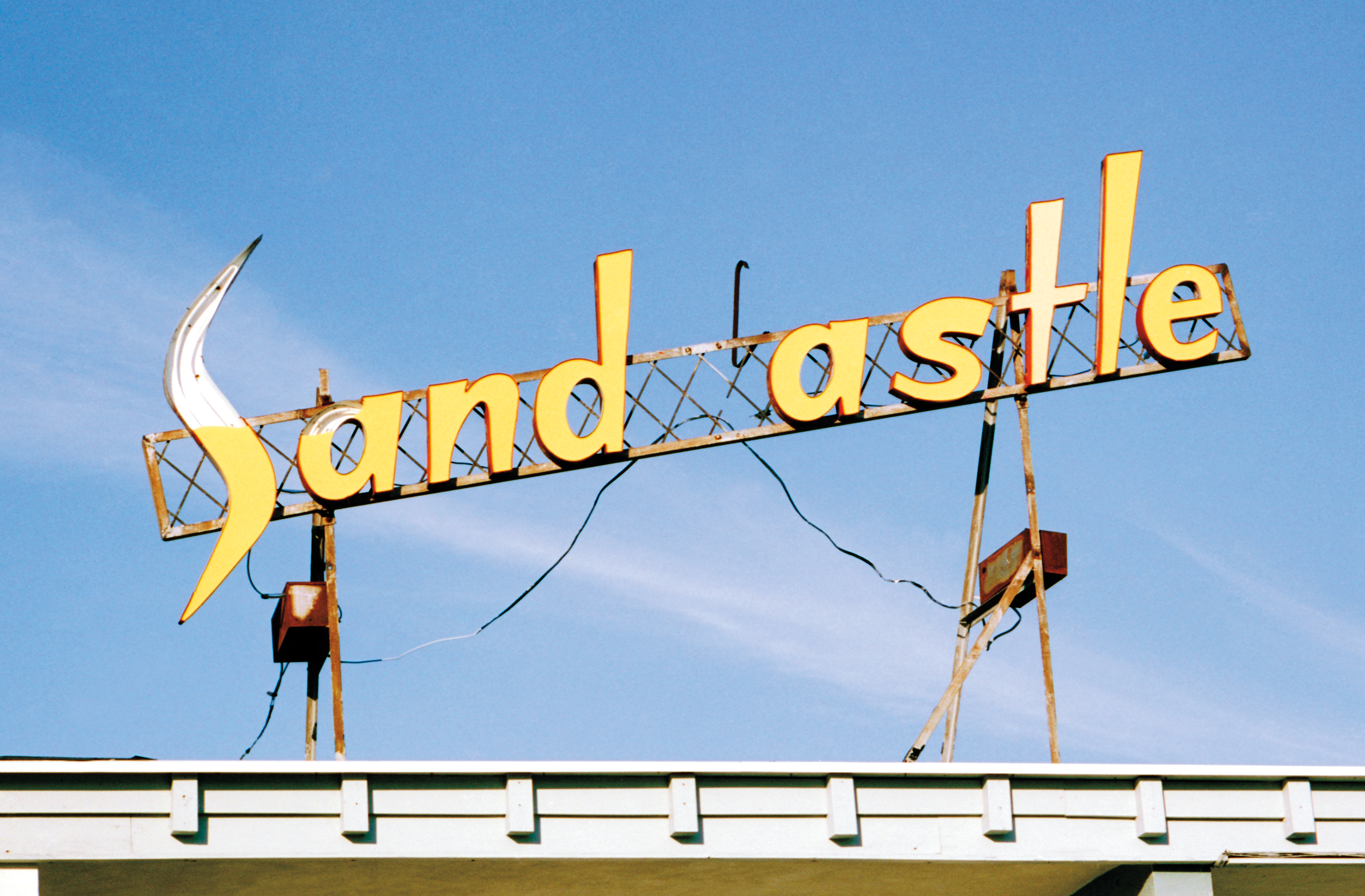 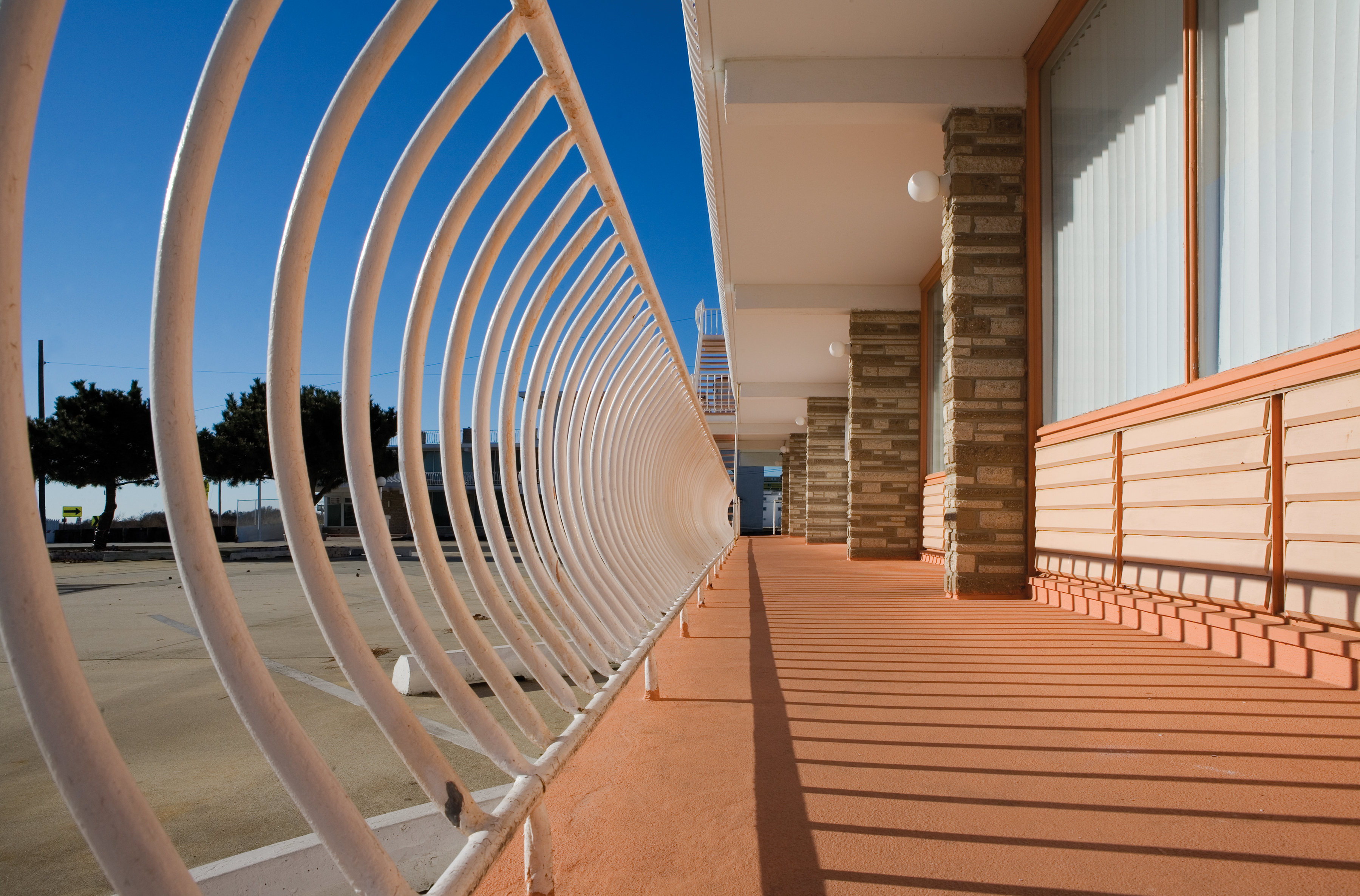 "You take an L-shaped, two-story, flat-roofed midcentury modern motel, take the neon off, remove all the signage, put a peaked roof on it and beige siding on it and an oval window glass door from Home Depot, and it looks as close as they can possibly to what a condo looks like," Havens says. "So there are a lot of places like that, that are still standing, but absolutely unrecognizable."

Post-demolition phase, a group of locals formed the Doo Wop Preservation League to save the remaining structures. Though essayist Giovannini says, "the jaunty name of the society itself implies the buildings are camp and that the cause is light rather than serious," the league went on to publish "How to Doo Wop: Wildwood-by-the-Sea Handbook of Design Guidelines" and has aimed to work with both visitors, owners, and developers alike to give the Googie/Doo Wop architectural style credit where credit's due.

Havens's book is a quiet but striking reminder of Wildwood's glory days as not only the epicenter of summer vacations in the mid-Atlantic, but of the bold moves of developers and architects alike during the ’50s and ’60s.

"I want to portray what was there and lost during a condo boom and let people draw their own conclusions,” says Havens. “I just really loved these places when I was a kid and want to show people what Wildwood, New Jersey was all about."

Perhaps most telling of Out of Season, which showcases Havens's print and digital photographs of the motels in order from sunrise to sunset, is the list on the final page of the book. Next to each page number is the name of the motel featured. Typed out in bold, capital letters next to 24 of the motels is the word "DEMOLISHED."

Out of Season is available now.

Note: This story was originally published in June 2016, and has been updated with the most recent information.

Editor markup for Midcentury Modern Motels of Wildwood, New Jersey. This is only visible in the story editor.

The Curbed Guide to the Jersey Shore