A maximalist and carpenter bring comfort and charm to Fishtown home

After a long hunt for a home with character, the couple had to bring the personality themselves

Audrey Morrison and Mike Castagna will be the first to admit that their house-hunting process could have gone a little smoother. After all, both of them grew up in Northeast Philly, so with their insiders' knowledge, finding a home should have been a piece of cake.

Not quite. As is often the case, the couple, who dated in high school, took a deep dive into the real estate listings rabbit hole. They knew that they wanted a fixer-upper, one that could potentially be their forever home. But touring a couple of homes each weekend eventually turned into eight open houses a night.

All in all, the grand total number of homes that the husband and wife checked out? "We looked at 200 homes," Morrison sheepishly admits. "I love going to open houses, but yeah, it got to be a little crazy."

So crazy that Morrison and Castagna eventually went for the complete opposite of a fixer-upper. Heads spinning from the amount of listings, they settled on a 3-bedroom, 1.5-bath brick home in Fishtown that had recently been rehabbed top to bottom. 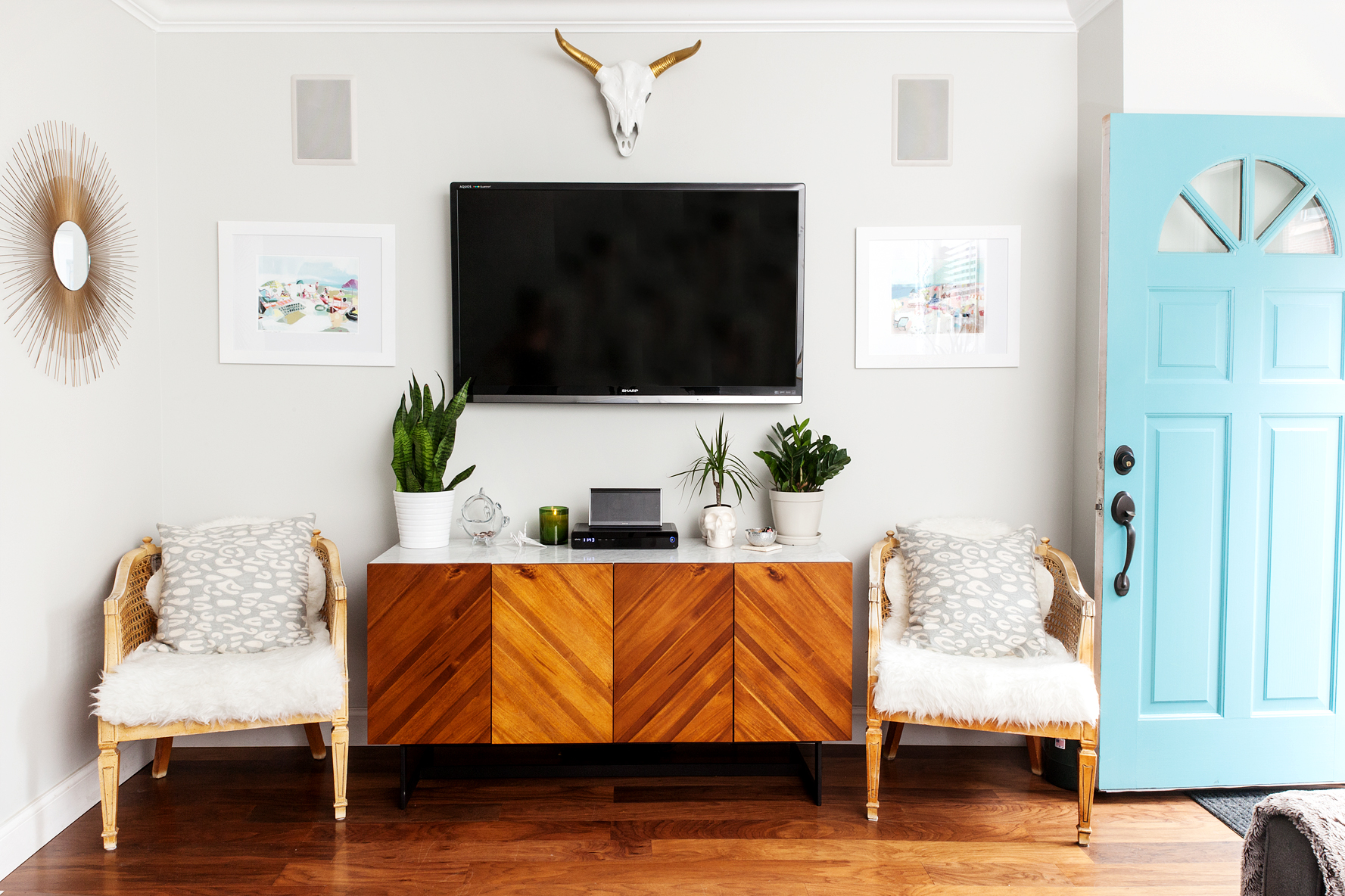 The vintage chairs were found on the side of a road. The TV stand is from Crate and Barrel. The beach prints are by Charleston, SC artist Teil Duncan.

For Morrison, a lifestyle editor for Comcast, and Castagna, a carpenter, their challenge wasn't a flipping a property—it was bringing some bold personality into a basic Philly rowhome. Says Morrison, "We made it our mission to take a contractor-beige box and turn it into something light, bright, and welcoming."

Based on the numerous gallery walls, thrift-store finds, and DIY projects that fill the 1,800-square-foot home, it's safe to say, "Mission accomplished," to the husband and wife.

The first task to ridding the home of its bland interiors: A paint job. The couple had hosted a paint party with their friends ("This was before everyone started having kids and still had time for those," Morrison jokes). The home pops with color starting with the robin's egg-blue front door and fish-shaped sign featuring their house number. (Neighborhood residents can buy the sign from the Fishtown Neighbors Association, though they've become so popular that they're currently sold out.)

I'm a maximalist who wants to be a minimalist

Morrison's love of blue continues in the guest room, which she doused in Benjamin Moore's Avalon Teal. The mix of gray and blue palettes allowed Morrison to layer on prints, textures, and more pops of color to the walls.

"I try to be streamlined, but I end up putting more and more on the walls," says Morrison.

The lifestyle editor calls herself a "maximalist who wants to be a minimalist." It's clear, though, that the husband and wife are a team, especially when Morrison speaks of how certain furniture pieces and design elements came to be. 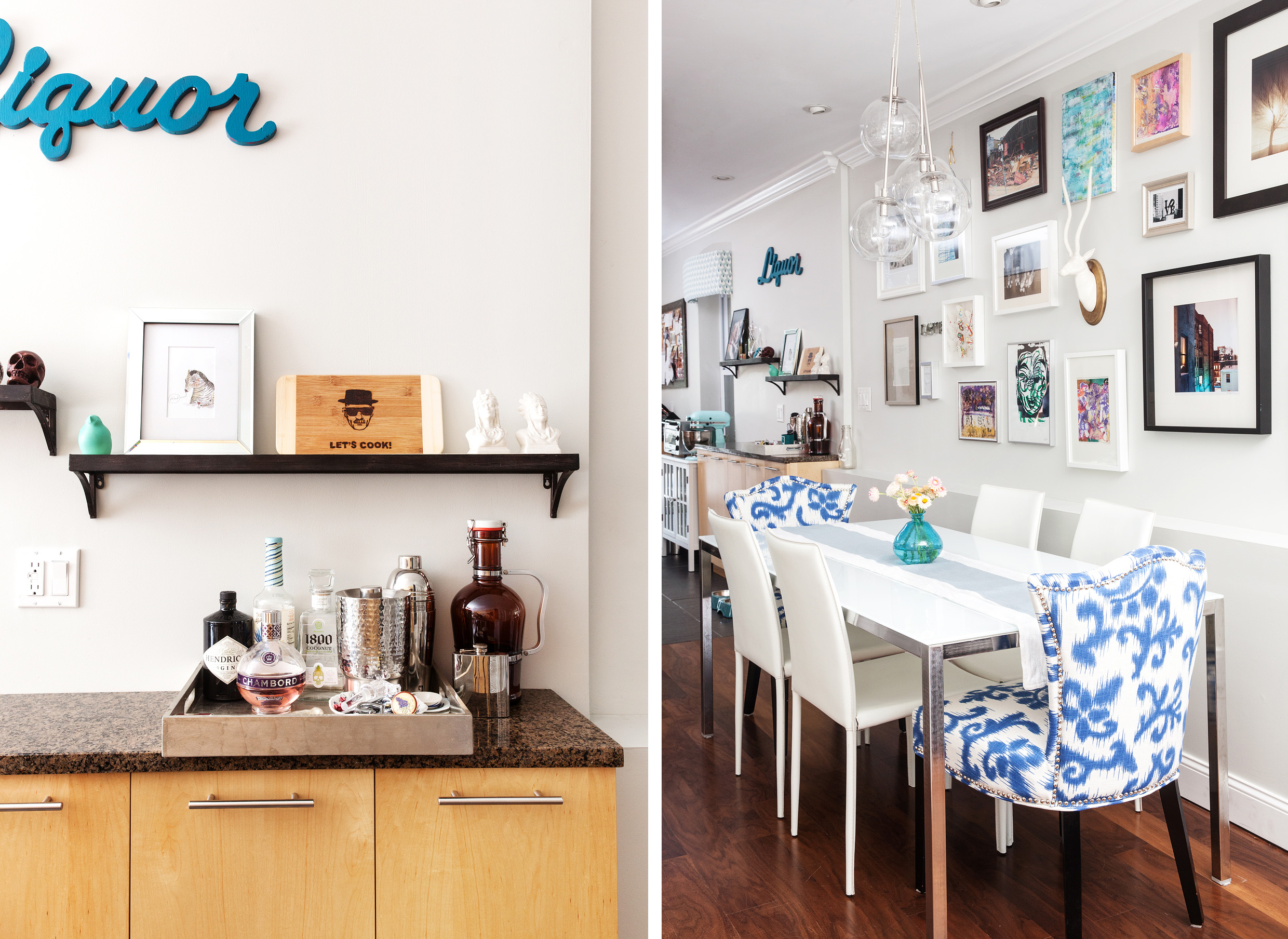 The two armchairs that sandwich the Crate and Barrel TV stand in the living room, for example, were found on the side of the road by Castagna. "He called me up and said, 'I have a feeling you're going to want me to take these," Morrison recalls. She gave them a good scrub down ("Lots of soap and water and furniture cleaner"), then threw some white shag rugs from IKEA and throw pillows over them for a chabby chic look.

That's how Morrison found many of the furniture pieces found throughout the home. After spending countless weekends down at the affluent Avalon Beach in New Jersey with her family over the years, Morrison says she can't help driving past multi-million dollar beach houses just to see what vintage pieces owners have left on the curb.

It's been five years since Morrison and Castagna found their Fishtown home after a mind-boggling number of house tours. While it wasn't necessarily their dream home, and may not even be their forever home, the couple says they've made it a great home.

"We entertain a lot, so it's vital that our space be equal parts charming and comfortable," says Morrison. "We love the home we've created."

View all stories in House Calls