I played out my childhood dream of living in a treehouse

Would a night in a treehouse in my 20s have the same effect as when I was a kid?

I have always been curious by the idea of tiny living—emphasis on the curious. It sounds so smart and good on paper: It doesn’t break the bank, it forces you to get rid of crap (I have 10 pairs of sneakers why?), and it makes for a low carbon footprint. But I never thought my curiosity would turn into reality, when earlier this month I found myself driving two hours outside of Philadelphia to stay in a three-story treehouse. On 40 acres of land. By myself. 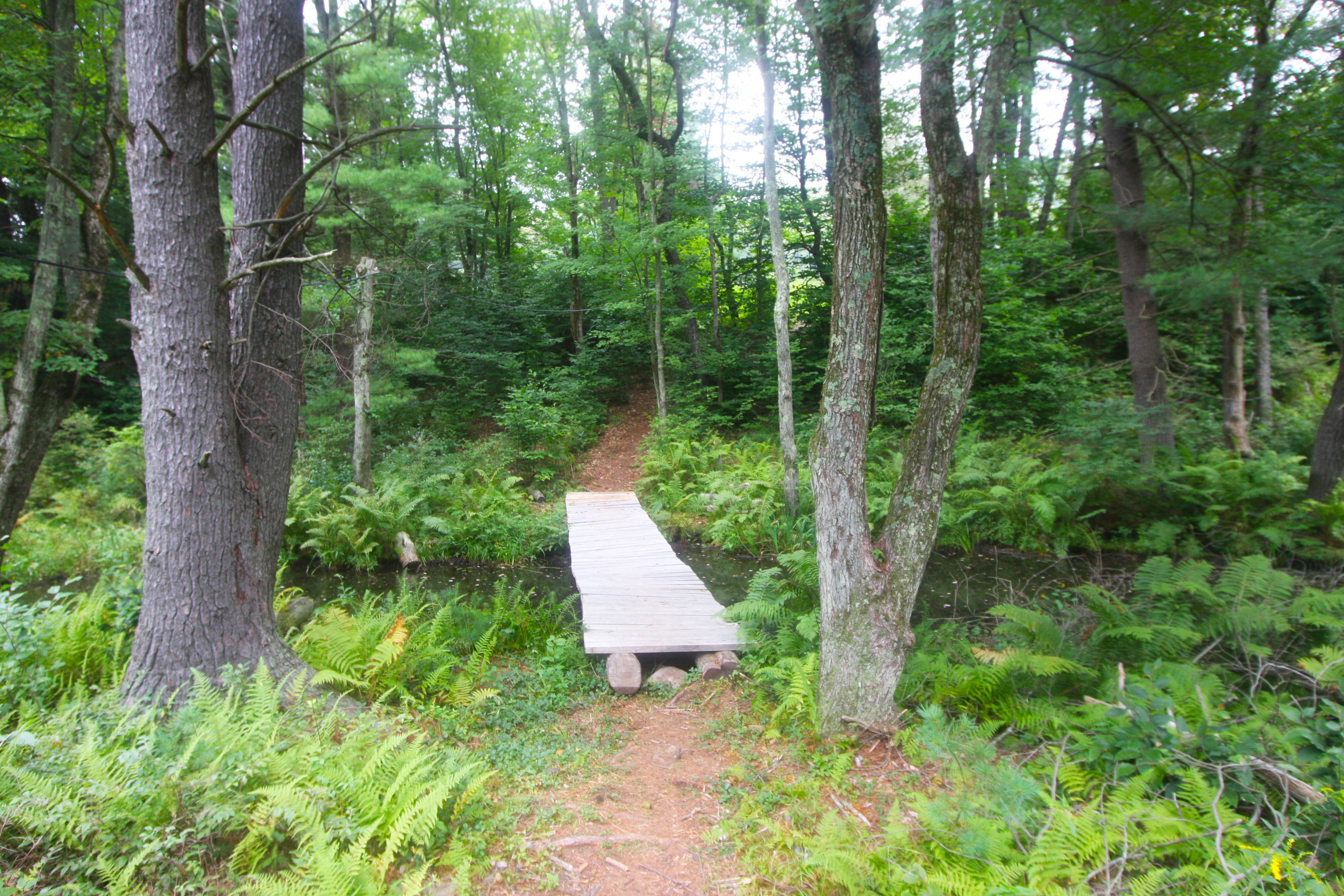 My curiosity began as a wee toddler with a bowl cut, when my parents fulfilled every kid's dream by building a small treehouse in our backyard. It wasn't one of those tricked-out treehouses that reality TV shows feature these days. No, this one had a small sand pit at the bottom and stairs leading to an open-roof deck. But it was ours.

My older sister and I spent years hiding away up there, playing house high above ground. Our childhood cat Cookie even gave birth to three adorable kittens (who were creatively named Smokey, Pokey, and Spikey) in the treehouse.

But by night, we always ran down the stairs back into the comfort of our real home, climbing into our real beds after eating a real, home-cooked meal. And as we aged, so did the treehouse. And when the Maple tree it was built around died, so went the treehouse with it.

For years, the thought or site of a treehouse always caused a wave of nostalgia to wash over me. So when the opportunity presented itself to spend a night in one in the Pocono Mountains, I filled my backpack with unhealthy snacks, water, and hit the road.

The two-hour drive ended with me turning off a busy two-lane highway onto a winding, gravel road. I slowly drove past cozy cabins until I found myself on the treehouse owner’s land, staring at horses grazing on hay with a gorgeous farmhouse as their backdrop.

A wooden sign pointed toward a small trail that led me to my treehouse for the night. With excitement and trepidation both swirling around in my gut, I grabbed my backpack and walked into the woods toward my tiny home.

Only, the treehouse wasn’t exactly "tiny." As I approached the structure, it towered above the ground, rising three stories with a wrap-around porch up top and colorful hammocks hanging on the second level. To be honest, it was nicer than any cabin or city apartment that I'd ever stayed in. It was beautiful. I was smitten. 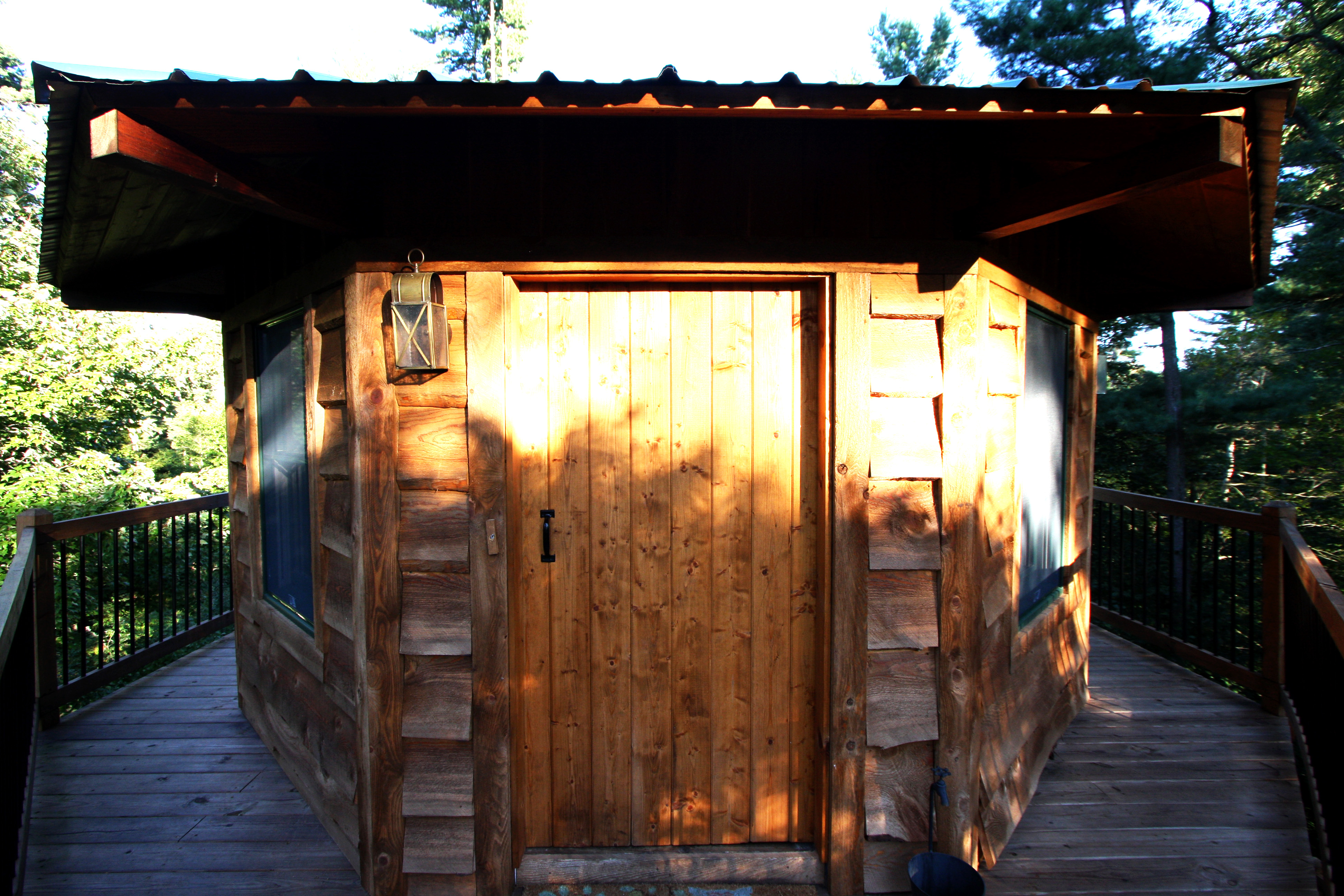 I learned that the owner’s first career was in design; she worked on historic homes in and around the Pocono Mountains. That explained the treehouse’s impressive interiors and overall sturdy build. The top story served as the only true indoor living area, and featured a beautiful pitched ceiling with exposed beams and windows on all sides.

I laughed when I saw that the couch was the very same IKEA pull-out bed that I had recently purchased for my own apartment. Its ability to turn into a full-sized bed and offer extra storage in the chaise section made sense for functional, small-space living. (And I soon learned it made for incredibly comfortable sleep.)

As I surveyed my surroundings, I delighted in other small, space-saving details. The small TV with a DVD player perched above the front door. The microwave atop the small fridge—not unlike my college dorm room. Even the bathroom downstairs impressed with its size, undoubtedly bigger than those found in most city apartments.

After setting up for the night, I meandered down a private trail toward the nearby Lehigh River. A blue heron, startled by my presence, flew off as I approached, and chipmunks and squirrels scattered left and right. I was enamored with the setting, amazed at my luck that this was all mine for the night. 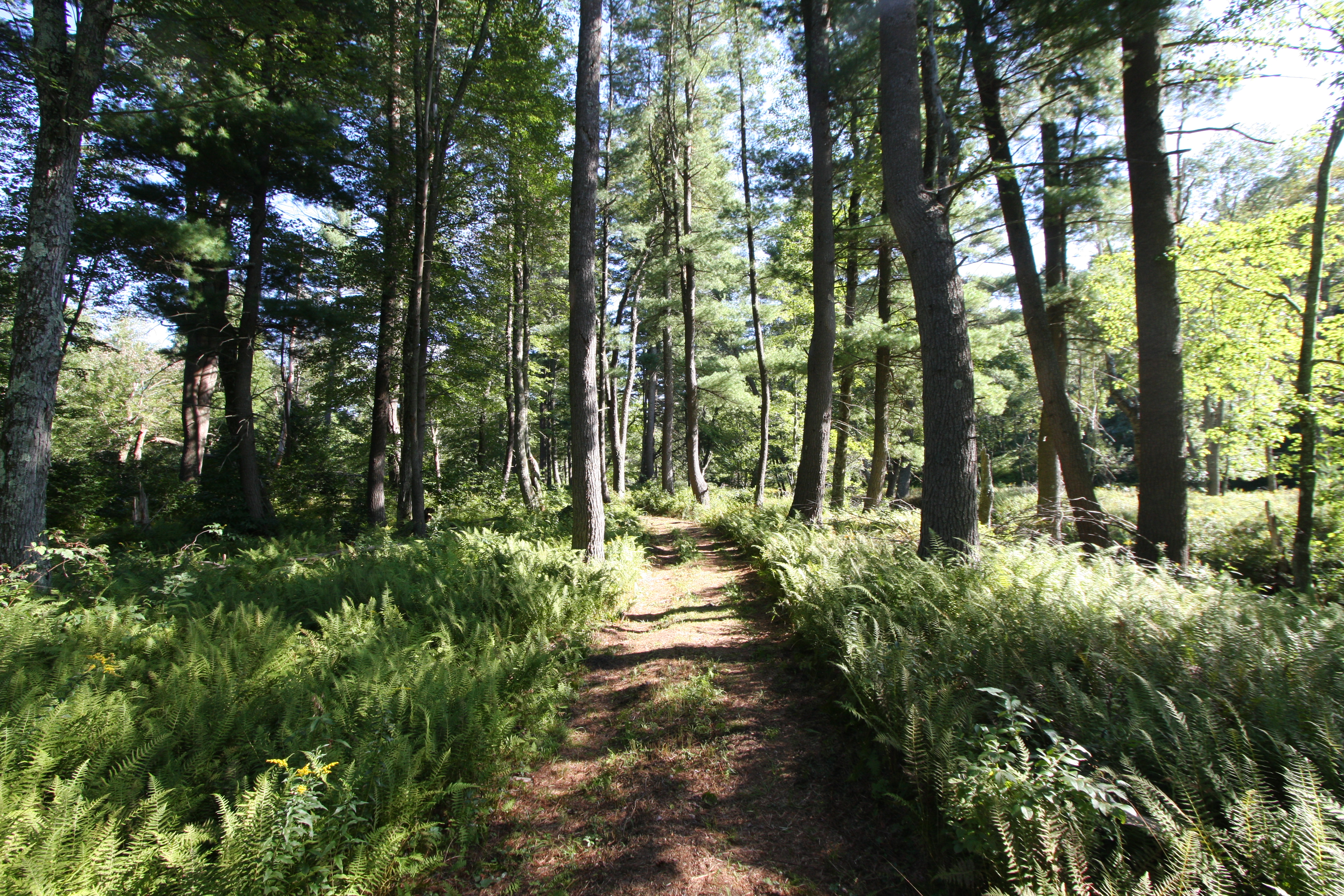 Over the next couple of hours, I hung out in a hammock and on the top porch, catching up on some reading I’d been meaning to "get around to" for, well, months. I snacked—a lot—and savored the crisp air and views of the tree tops surrounding my temporary tiny home in the sky.

Then, 7 p.m. came around. I hadn’t spent much time actually inside the treehouse, so decided to turn in for the night. I warmed up my sad microwaveable pouch of rice and beans, and popped in a DVD of The Help, courtesy of the treehouse, into the TV. As I settled into my meager meal and began tearing up (because Viola Davis is a national treasure) that’s when it hit me for better or worse: "Could you really do this night after night?," I asked myself. "Think about it."

And I did—because what else was there to do besides be alone with my thoughts in the middle of nowhere? 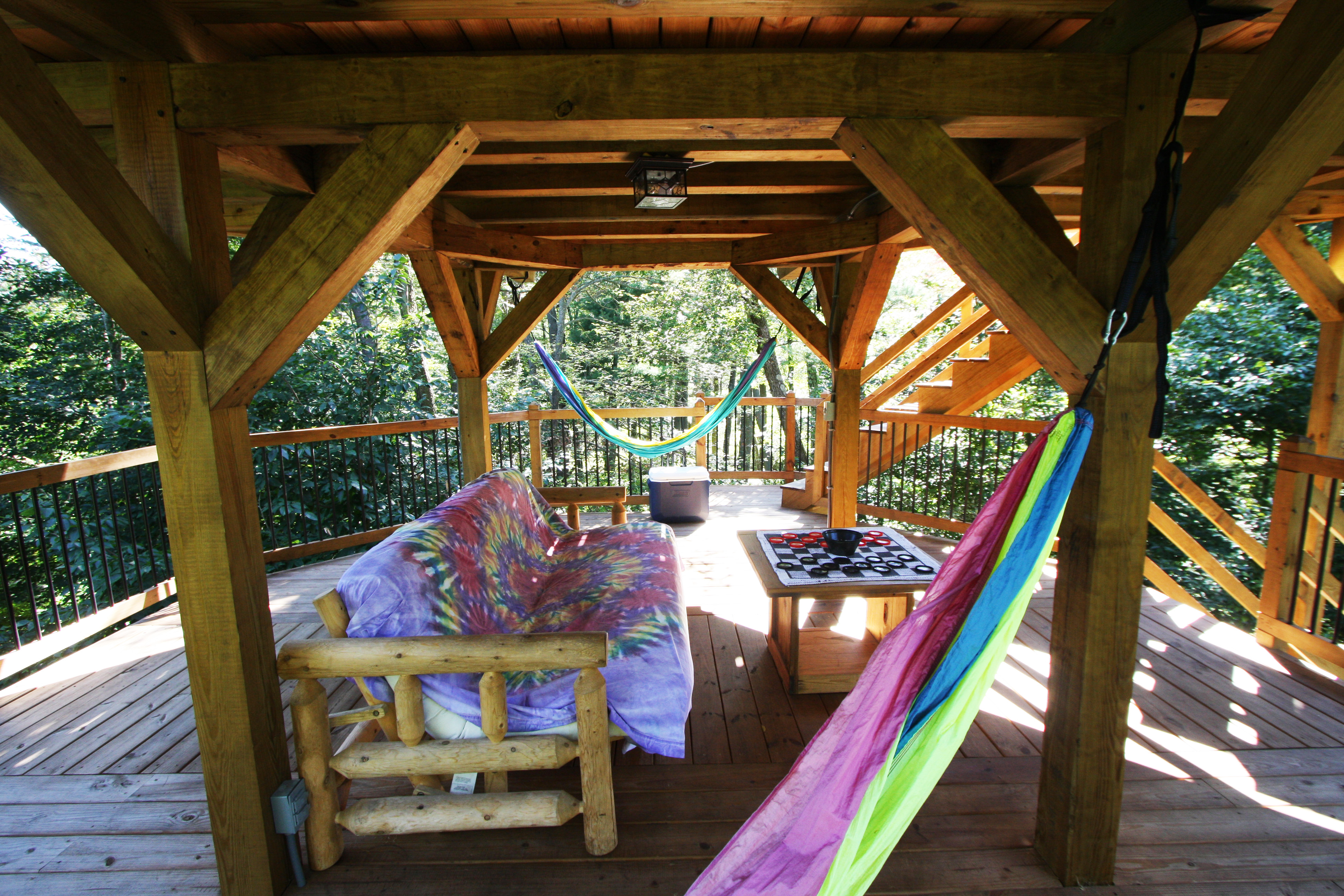 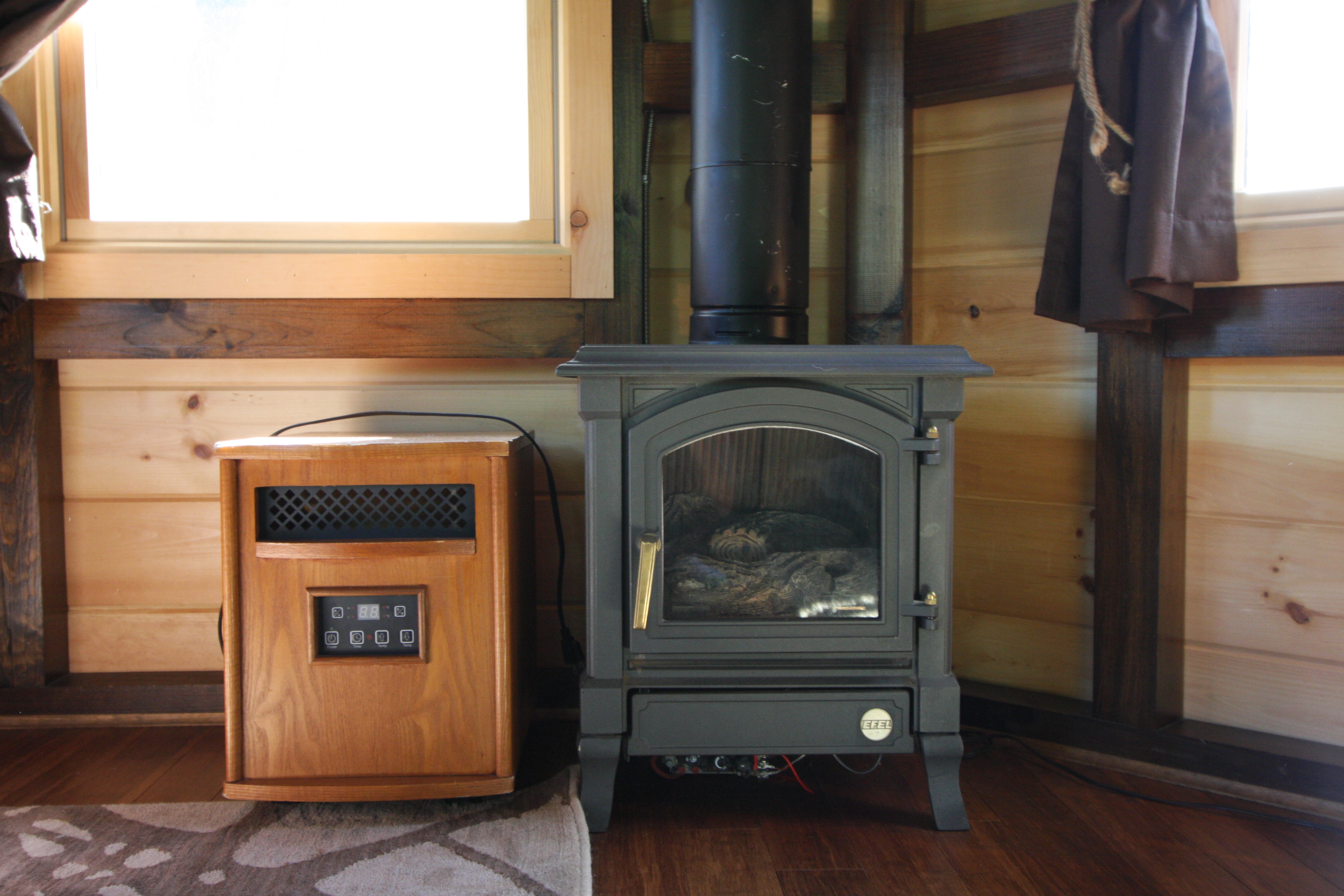 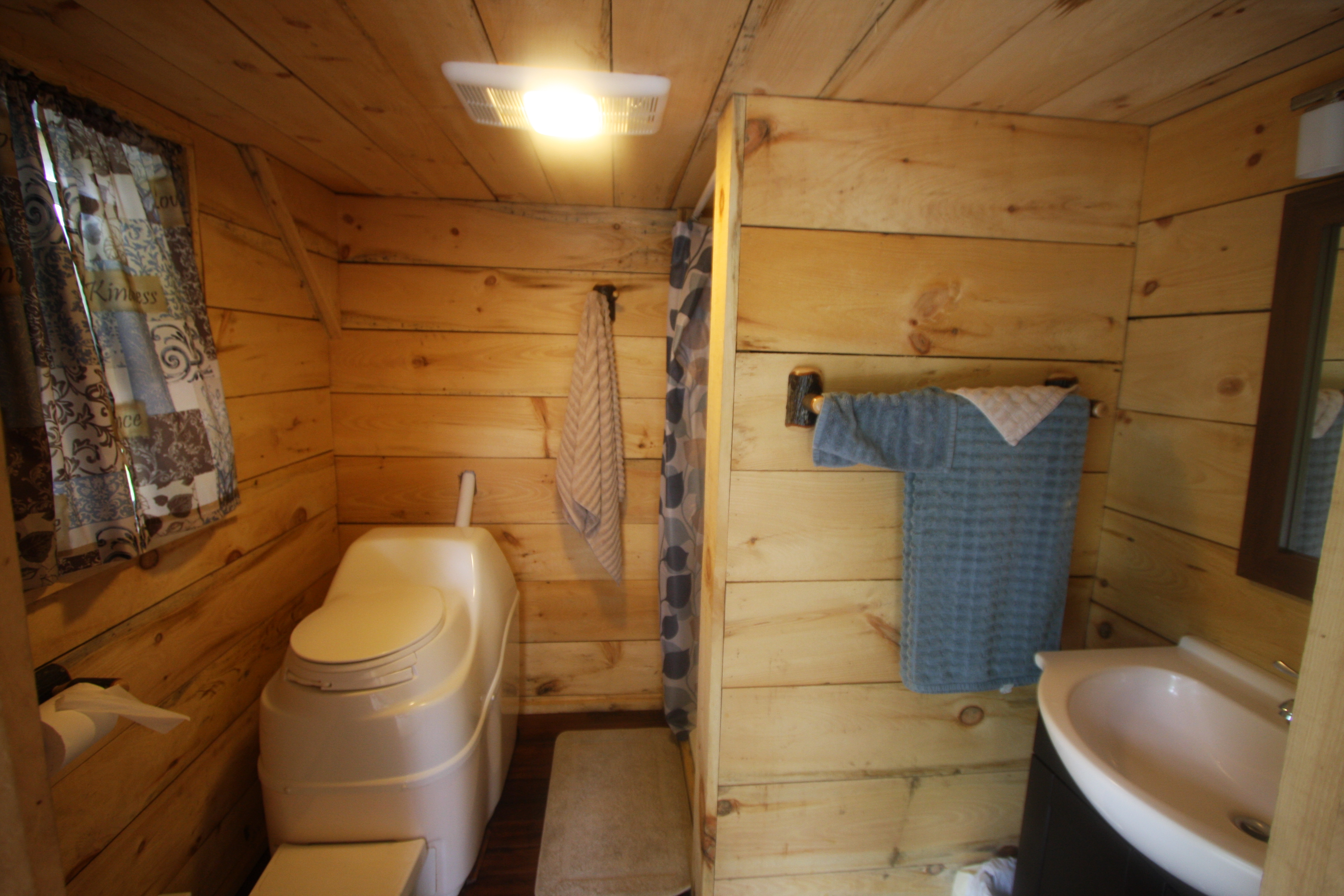 The pull-out couch I could handle—I ended up having the best 10-hour sleep in a long time. And there was plenty of room for a bigger refrigerator if needed, and even an AC window unit when the mountain nights weren’t so cool.

But while the outdoor grill and fire pit was a nice touch down below, what would happen in the winter? Same goes for the bathroom, which albeit pretty spacious would require walking outside to go pee and poop in all weather, all seasons. Not to mention that covering my, uh, bowel movements with moss every time I perched on the porcelain might get old.

Even the owner warned me ahead of my stay that the treehouse wasn’t exactly designed for tiny living. Instead, it was more used as a retreat space, mostly for couples. 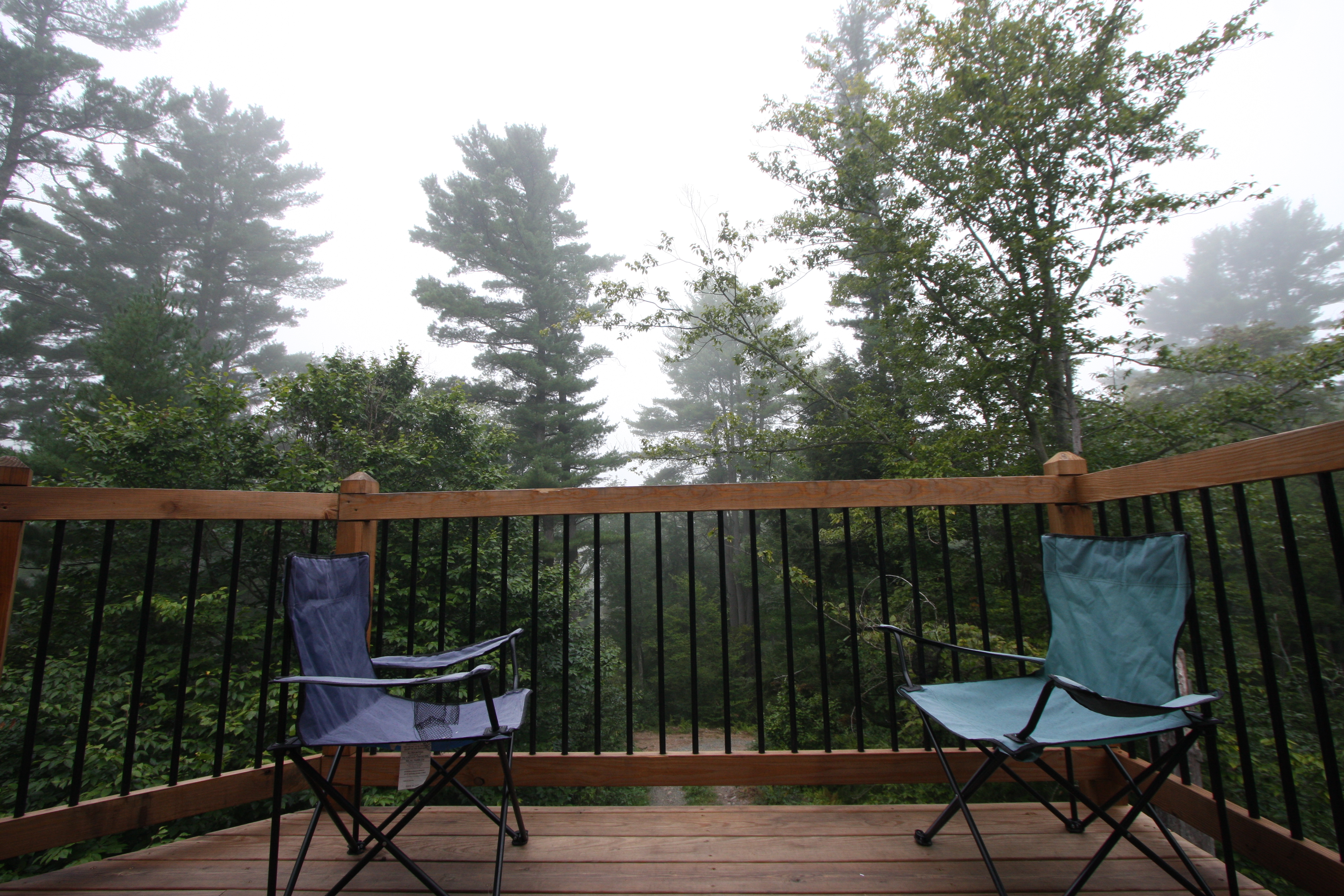 And therein was the glaring issue: High above the tree canopy, it hit me that I was so alone. Jack Kerouac (Yes, there truly is a Kerouac quote for every situation) said it best when he wrote in Dharma Bums, "The silence was an intense roar."

When I woke up the next morning, surrounded by a gorgeous haze of fog, I looked out over the balcony to acres of tree tops. Suddenly, I felt homesick for blaring police and ambulance sirens, cars honking, and the nightly brass band that parades down my street every night.

I could chalk it up to FOMO. But it may be that city living makes the ability to retreat to that treehouse or tiny cabin in the woods all the more meaningful.

I packed up, climbed down the stairs and toward my car, taking one last look as the treehouse faded into the foliage. It was time to go home. 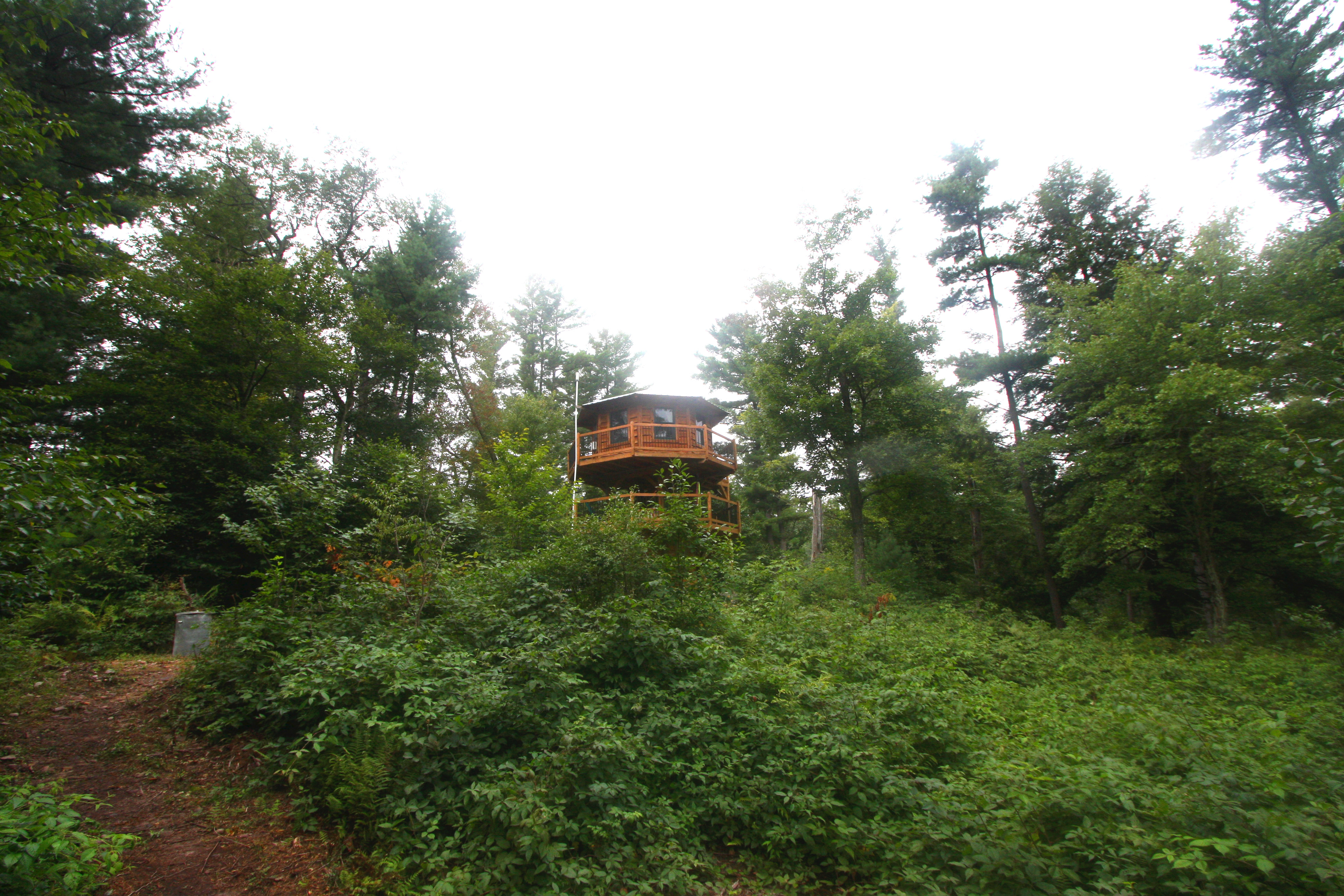 Tiny house financing: What you need to know

View all stories in Micro Week