With its maze of galleries, hundreds of artifacts, and thousands of skeletons, it’s doesn’t take much to get lost in the University of Pennsylvania Museum of Archeology and Anthropology.

But it’s one thing to get lost in the past and another thing to literally get lost trying to navigate the massive museum.

That’s why Penn Museum has started construction on its first major renovation in nearly a century—quite a long time given that the museum is 130 years old. Gluckman Tang Architects, which recently completed the renovation of the Philadelphia Museum of Art’s Perelman Building, is leading the redesign efforts.

“It’s been apparent to us, that we need to create better spaces to share these amazing stories,” said University of Pennsylvania president Amy Gutman at Wednesday’s groundbreaking. “I do not say this lightly: This is the museum’s moment.”

As a way to kick off construction, on Wednesday, November 1 the museum and university symbolically removed a trio of seats from the historic Harrison Auditorium, which is just one of the spaces that will be transformed during the first phase.

Here’s a more detailed breakdown of what to expect with Penn Museum’s new look, the first of which we’ll see in April 2018 with the opening of the Middle Eastern Gallery. The first phase will officially finish in September 2019. 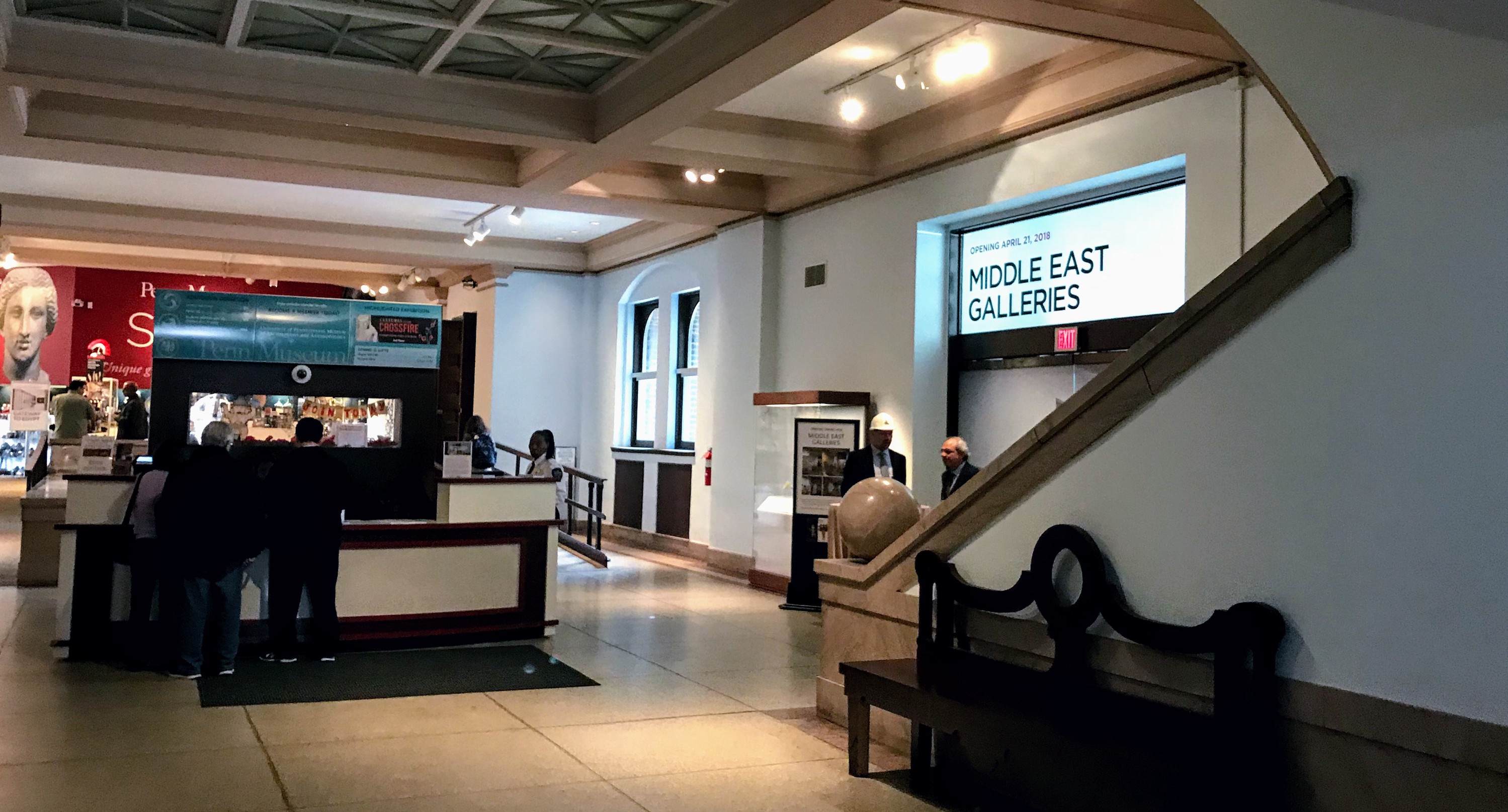 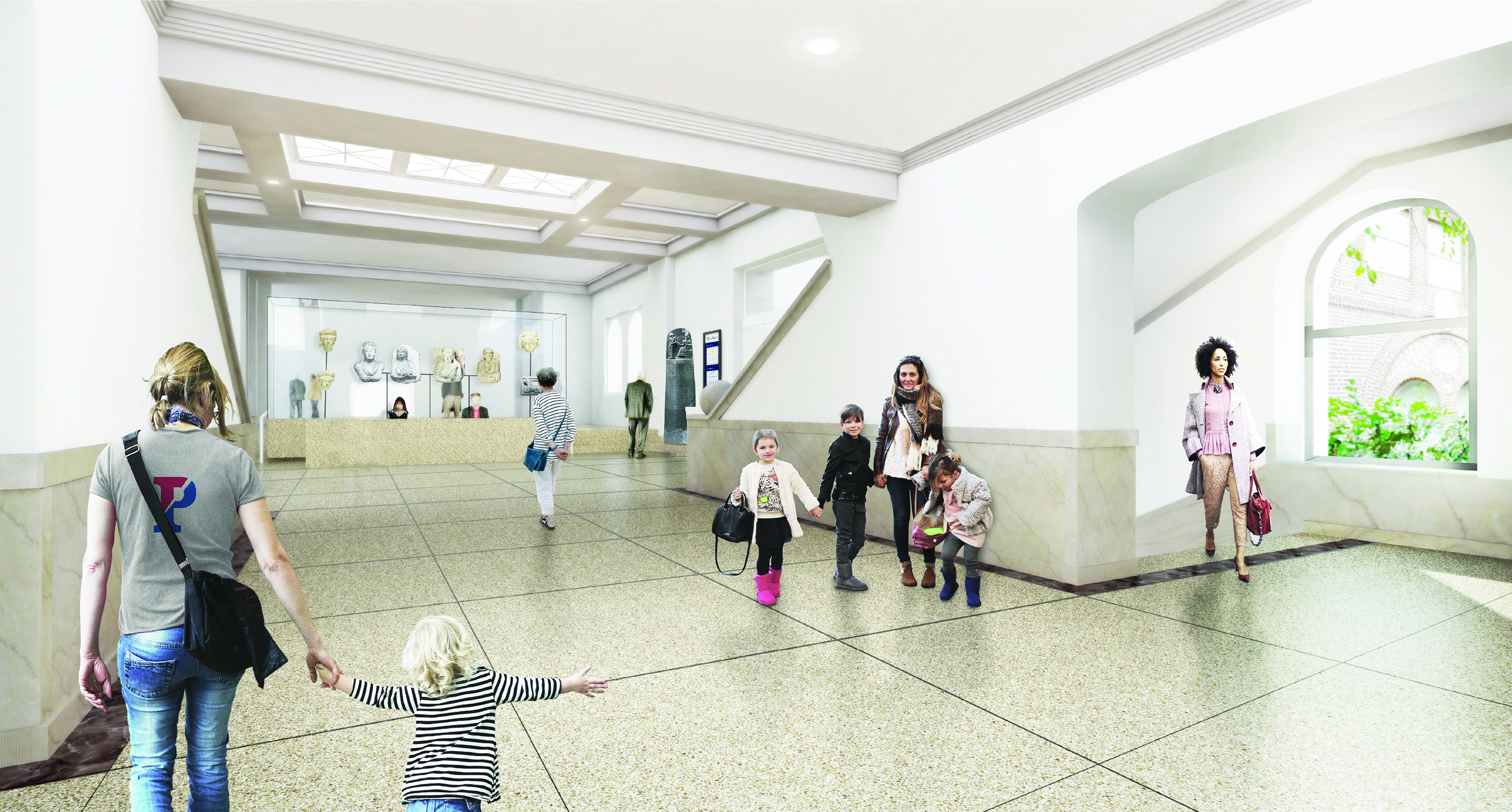 One of the main goals for the renovation is to “let the light in, literally” said architect Richard Gluckman. That starts with the Main Entrance Hall, which will reopen two staircases that have been closed for more than a century. This, plus a new gateway to the Egyptian Galleries lined with large windows, will fill the Main Entrance Hall with more natural light.

Meanwhile, the gift shop at the top of the Main Entrance Hall will be moved elsewhere. 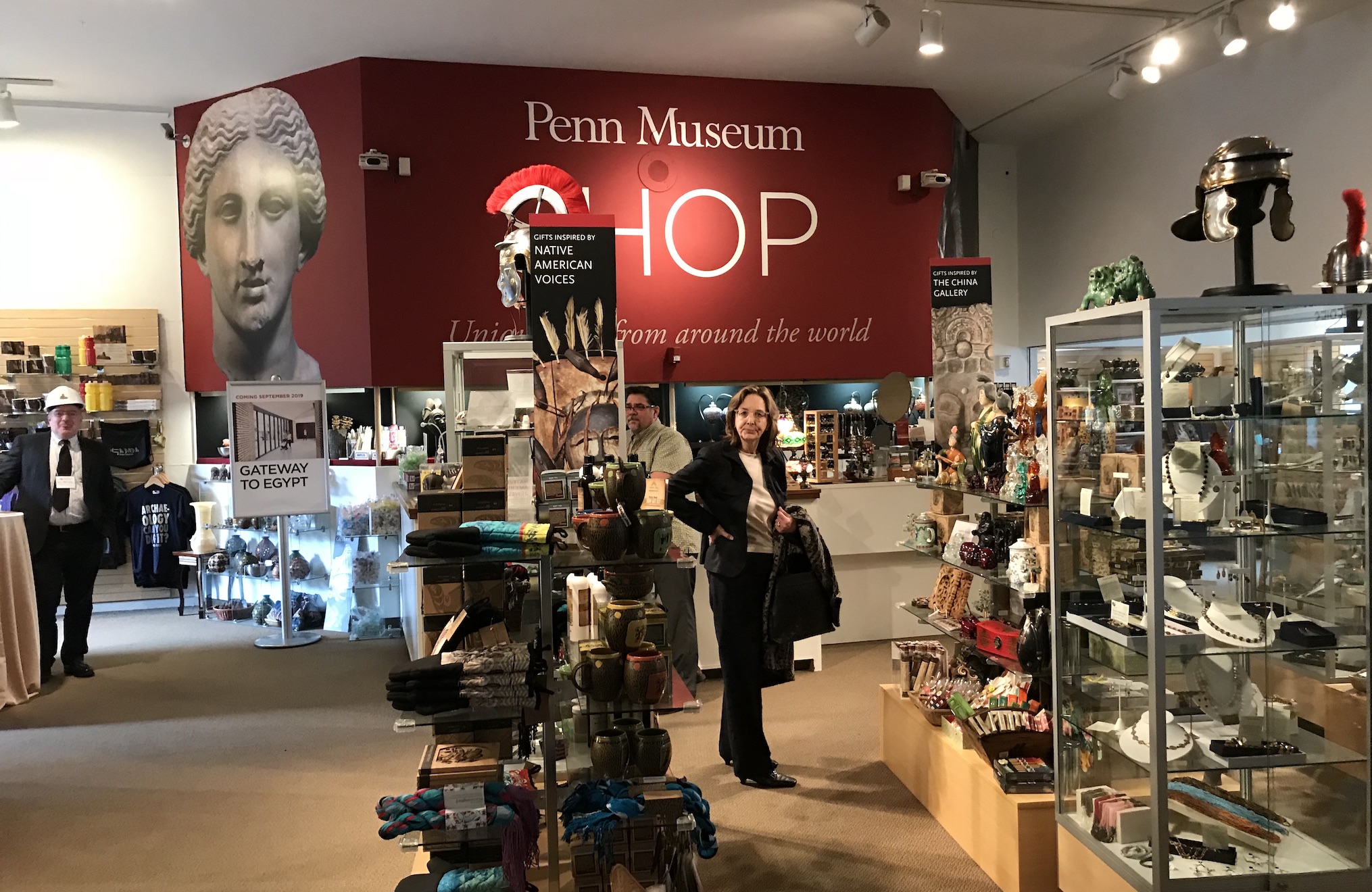 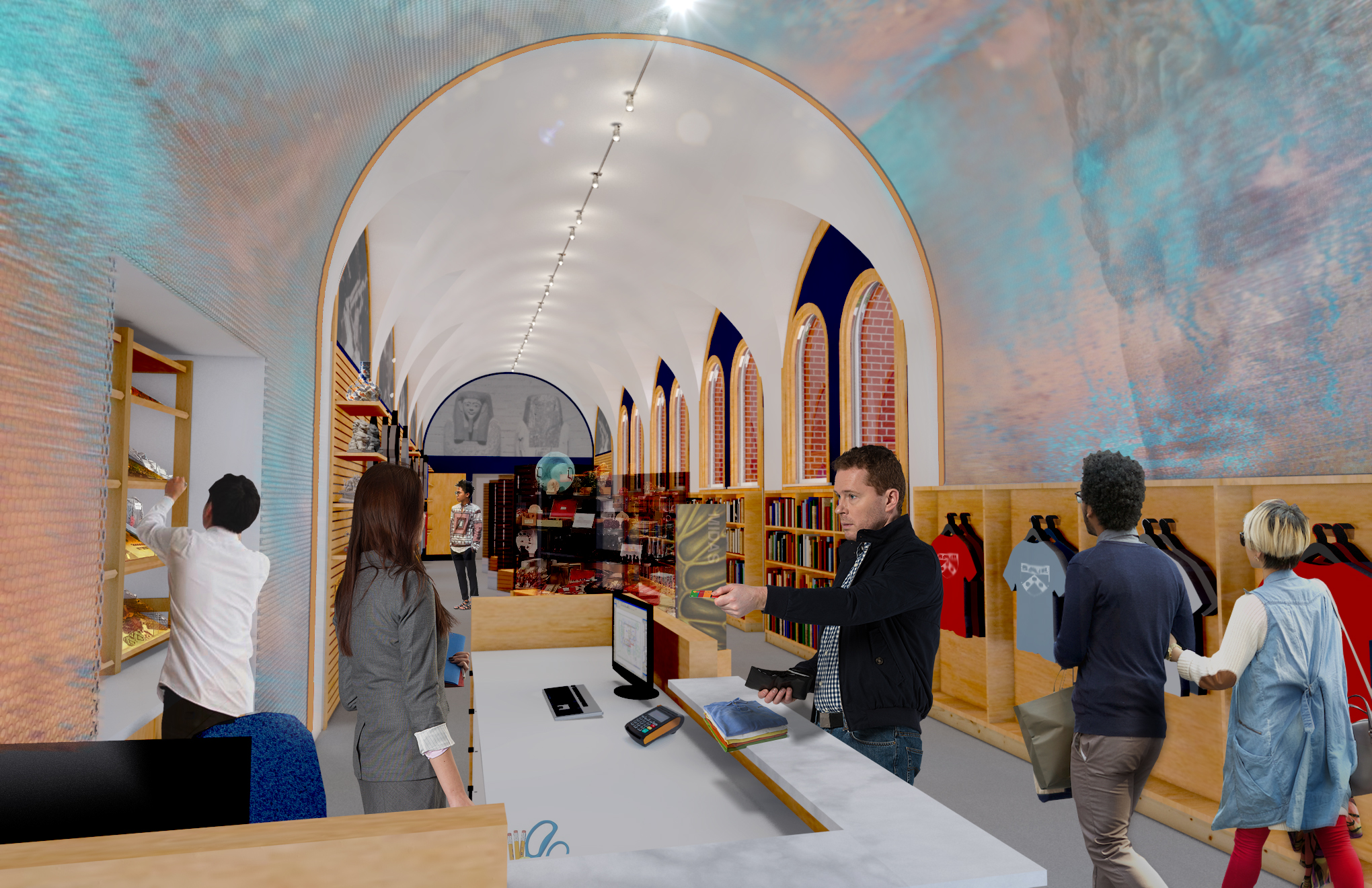 The gift shop will be moved from the second floor to next to the Pepper Mill Café and reopen in early 2018. Its old space will be replaced by a new Crossroads of Cultures Gallery.
Photo by Melissa Romero and Rendering by Gluckman Tang Architects

Comfier seats and air-conditioning in the Harrison Auditorium

With its domed Art Deco ceiling, the Harrison Auditorium is undoubtedly one of the most iconic and grand spaces in the museum. But its 1940s chairs haven’t been upgraded in decades, and without central air it basically feels like an oven during the summer.

The auditorium will be closed from now until September 2019 as the seats are removed, refurbished, and reupholstered and air conditioning is installed. There will also be new lighting, flooring, and sound and audio enhancements.

A bunch of new Signature Galleries

Along with brighter and more visitor-friendly spaces, the Building Transformation project will also bring more galleries to the museum, totaling 44,000 square feet reinstalled space. The first opening will take place in April 2018 with the Middle East Galleries. In November 2018, the Mexico & Central American Gallery will open, followed by the African Galleries in September 2019.

A new installation of an Egyptian pharaoh’s palace columns

After the first phase is complete, future new galleries will follow, according to Penn Museum. That includes a new and improved Egyptian Galleries, which will feature columns and pylons from the 13th-century-BCE palace of the pharaoh Merenptah. These artifacts will be displayed at full height—23 feet tall—for the first time since they were discovered. 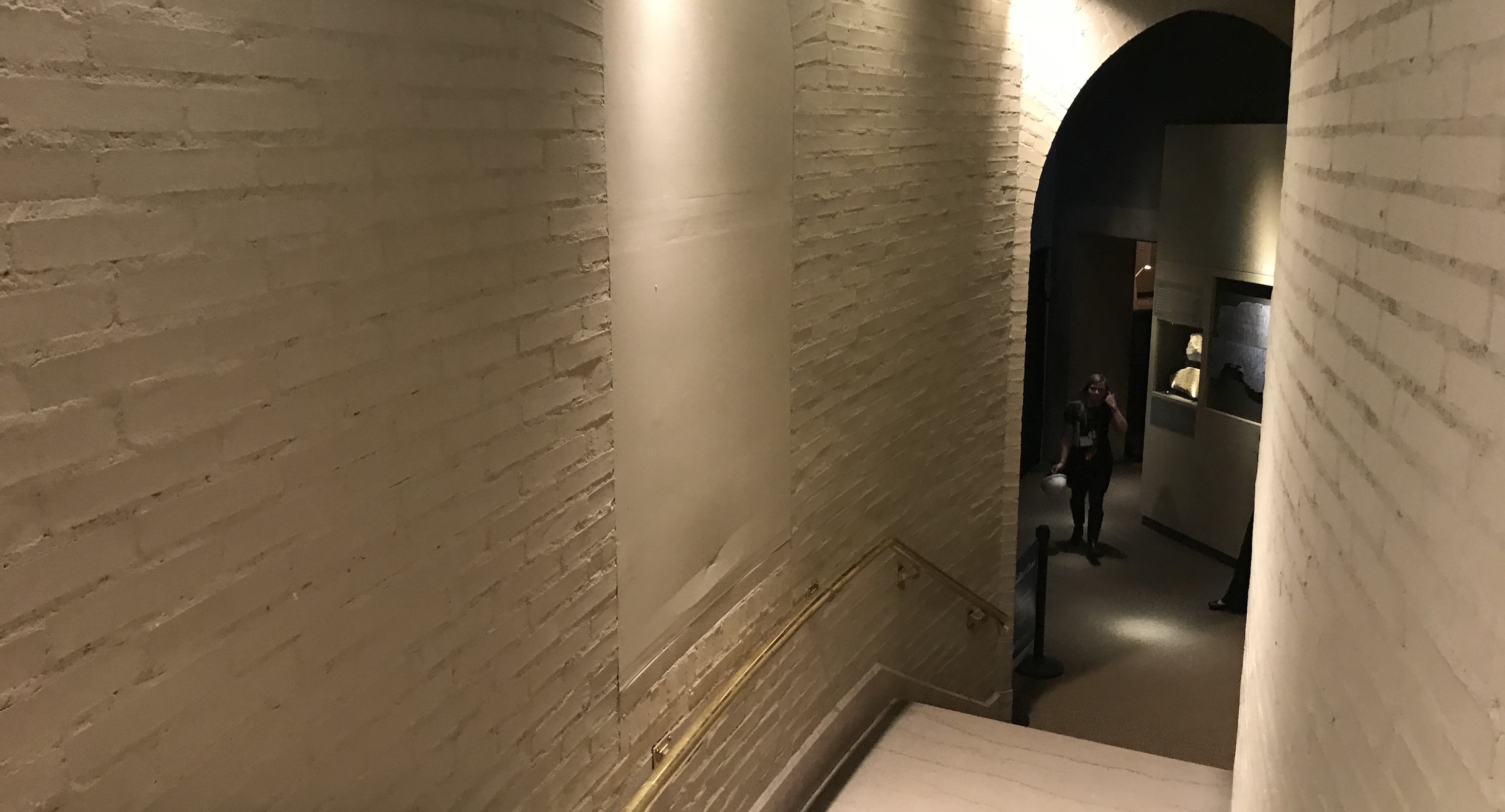 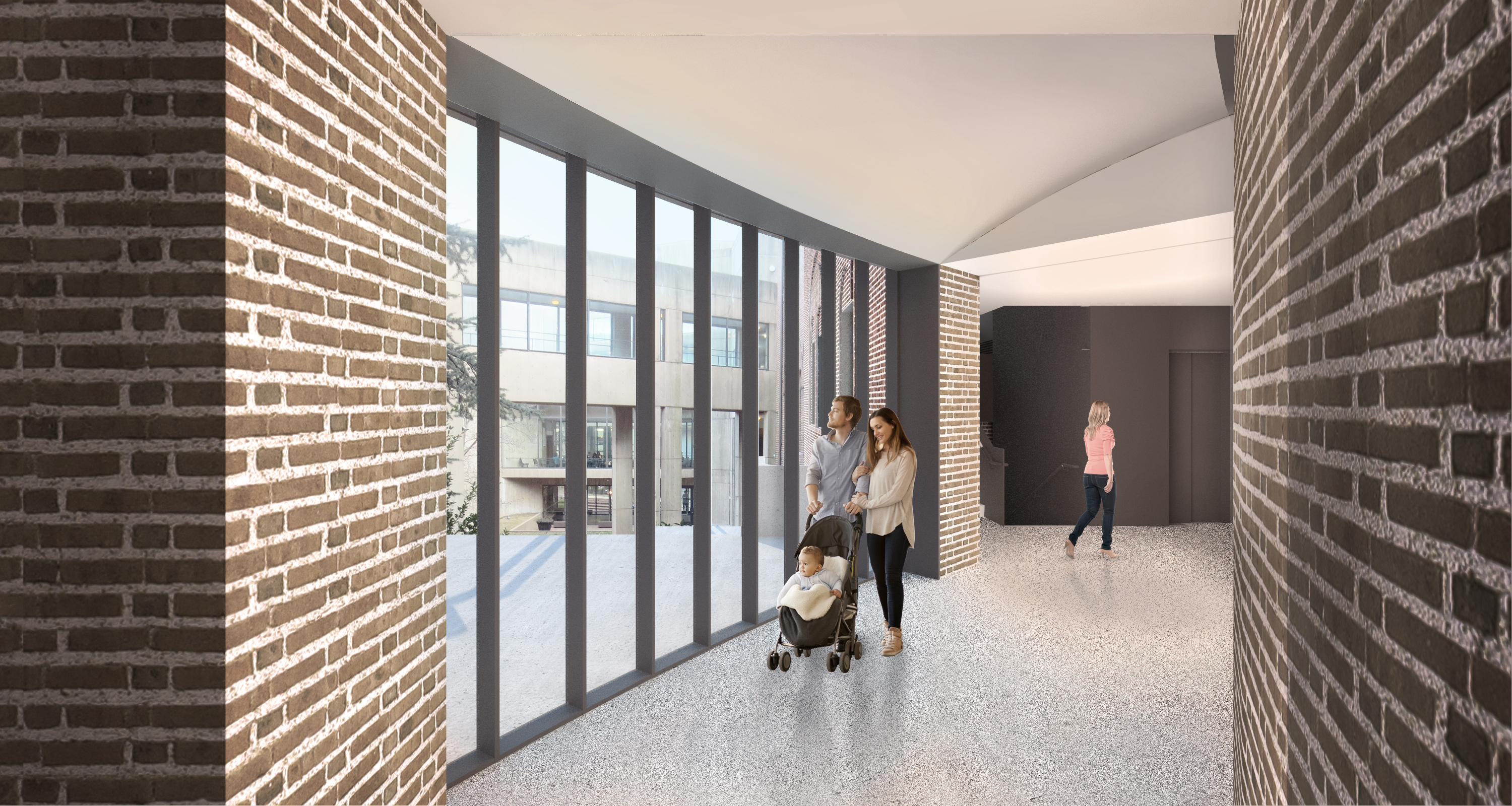 The entrance to the Penn Museum’s Egypt galleries will open up with windows and be accessible for wheelchairs and strollers.
Photo by Melissa Romero and Rendering by Gluckman Tang Architects

Much better navigation and accessibility

As it stands now, Penn Museum is tough to navigate. The clearest piece of evidence is that to access the main bathrooms from the Main Entrance Hall, one has to descend a set of stairs, and then go down another three steps to enter the restrooms. Coming from the Harris Auditorium, one has to climb a set of stairs and then walk down the three steps.

No longer: There will be two new elevators installed that will go all the way up to the third floor, plus a set of new restrooms on each floor that are accessible.