From Lincoln Square on South Broad to Broad and Spring Garden

Editor’s note: This article was originally published on February 13, 2017 and has been updated with the most recent information.

The building boom in Philadelphia is changing the skyline at a rapid pace, with more than 20 high-rises currently under construction. An estimated 1.4 million square feet of new office construction alone is set to deliver in the city by 2020.

From how to improve public transportation in cities, ranking the best car-free neighborhoods across the country, and a friendly competition between NYC, San Francisco, and Los Angeles to determine which has the best public transit, this week is all about how we get around in our favorite cities. All aboard!

All that to say: Philly’s corners are going to look very different in a few years, especially with the amount of mixed-use, walkable developments in the works. Amid all of this new construction, there is one noticeable trend: The rise of residential, retail, and office towers on former parking lots. (It’s not just parking lots, either. As architecture critic Inga Saffron noted recently, Philly’s parking garages are getting the boot, too.) For a city where a majority of households still drive a car to work, this is significant.

Below, see how seven major projects—all currently at various development stages—are set to transform parking lots throughout the city, from Logan Square to Fishtown.

Most recently, this parking lot on the corner of South Broad Street and Washington Avenue served as place to dump piles of snow. But in late 2018, it will be home to Lincoln Square, a mixed-use development with 322 apartments and 100,000 square feet of retail, which includes the rehab of a historic train shed into a grocery store and a Target. Developers Kimco Realty, Alterra Property Group, and MIS Capital and BLT Architects are behind the project. Construction began in late December and early January and the nine-story building is currently on the rise.

In three years, this parking lot at 13th and Market will be replaced by a 38-story office tower designed by Skidmore, Owings, & Merrill (SOM). The glassy building will clock in at 840,000 square feet and will feature retail and roof top terraces, with neighbors City Hall and Macy’s close by. In May 2017 the future tower began leasing.

This parking lot at 23rd and Arch is one of the last open spots remaining along the Schuylkill River Trail. In November 2016, PMC Property Group announced that its plans to build two residential towers, by right, on the site. The original plan was to break ground on the Gensler-designed project in late spring or summer, but that date has been pushed back and work still has yet to begin.

Continuing the building boom on North Broad, this parking lot at 510 N. Broad Street will feature two towers designed by BLT Architects and developed by Parkway Corp. and Nightingale. The $300 million undertaking will be an office and residential project, and a design departure from BLT Architect’s more traditional-leaning portfolio. Retail is also in the works for the parking lot across the street next to the Mural Lofts as a separate project by Eric Blumenfeld. The developer as started actively marketing the project, which is being called True North. Its website says to expect a Spring 2019 opening.

With its recent groundbreaking, by the end of summer in 2018, this site at 440 N. 15th Street will have a 10-story apartment building on its grounds, the first of two residential towers called the Hamilton. Radnor Property Group and the Community College of Philadelphia are behind the $150 million by-right, multi-phase project that will include 600 apartments and underground parking. The The second, taller 16-story tower will be built in the second phase on the site’s current parking lot. 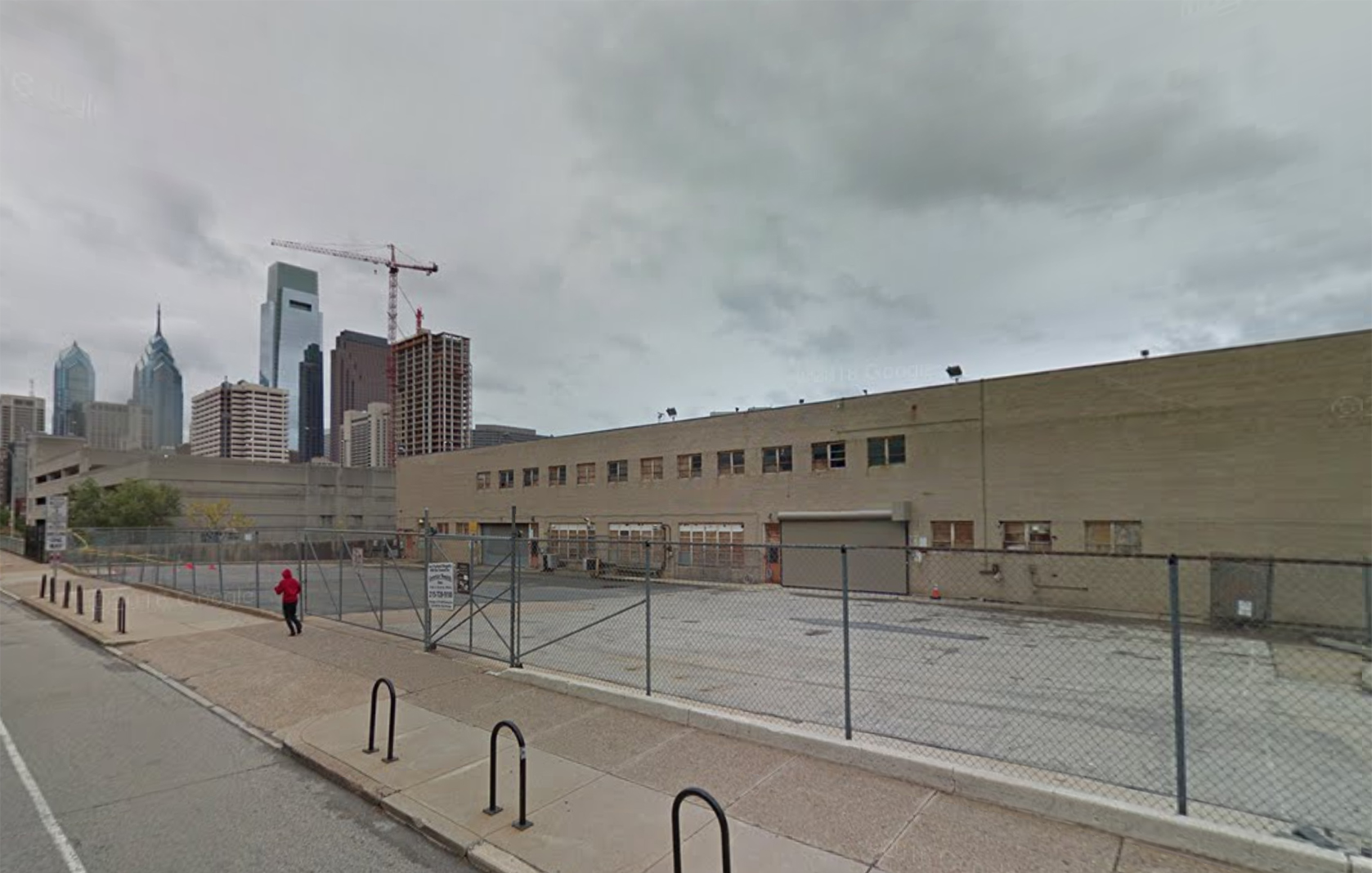 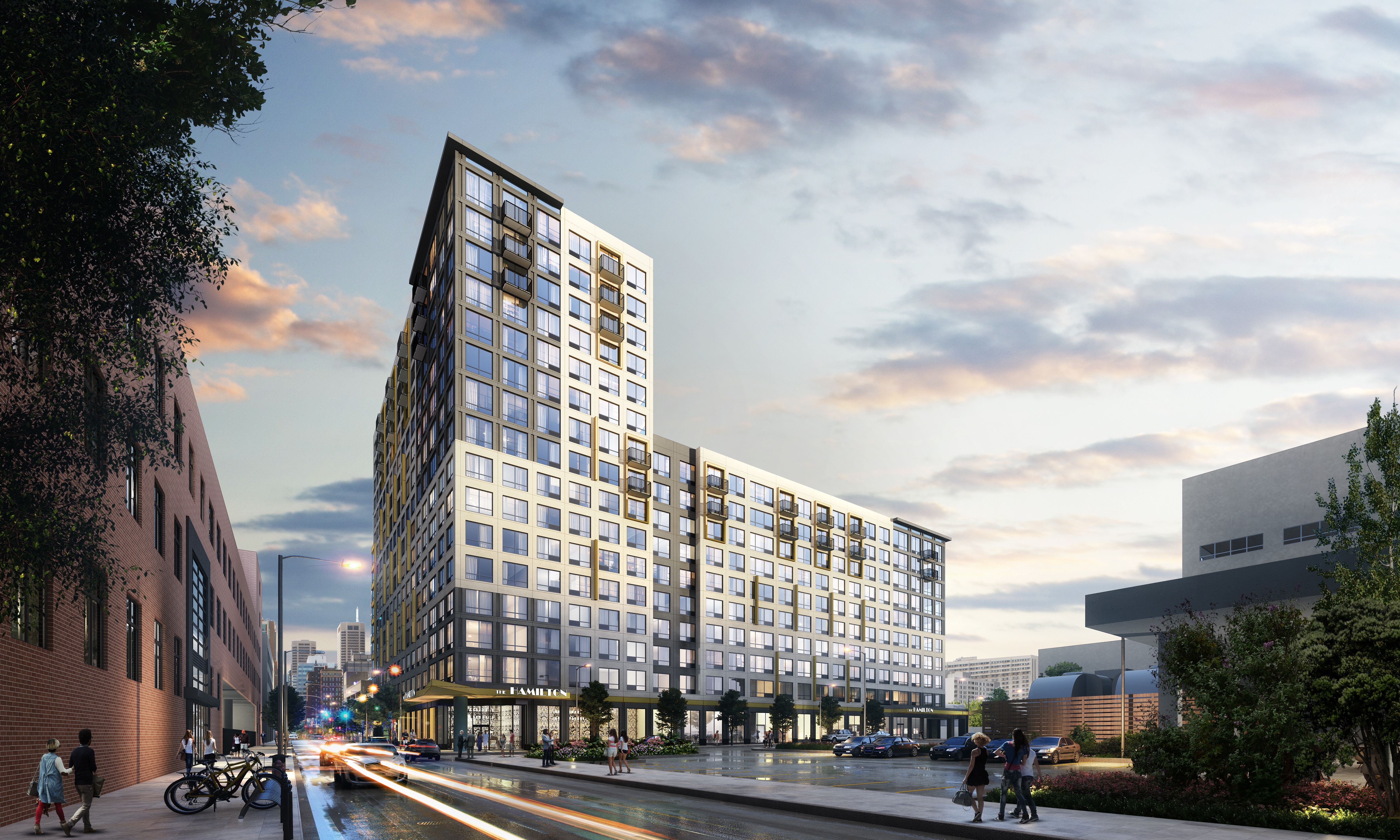 Rendering by MY Architecture

In November 2016, Core Realty and Stanev Pott Architects presented to the Civic Design Review their plans to build a mixed-use residential project with a massive rock-climbing gym on a parking lot at 1100 N. Delaware Avenue. The new building will house apartments on the top five stories and a 22,000 square-foot-space for Grid City Climbing. The Ed Corner building on the site will also be converted into residential units.

The parking lot at 10th and Vine is slowly but surely disappearing to make way for the long-awaited 20-story Eastern Tower Community Center. Talks to build this tower for the Chinatown neighborhood began in 2011, but it took years to raise enough money to get the project off the ground. It will bring 147 market-rate apartments, three affordable units, and 44,200-square-feet of commercial and retail space to the lot. 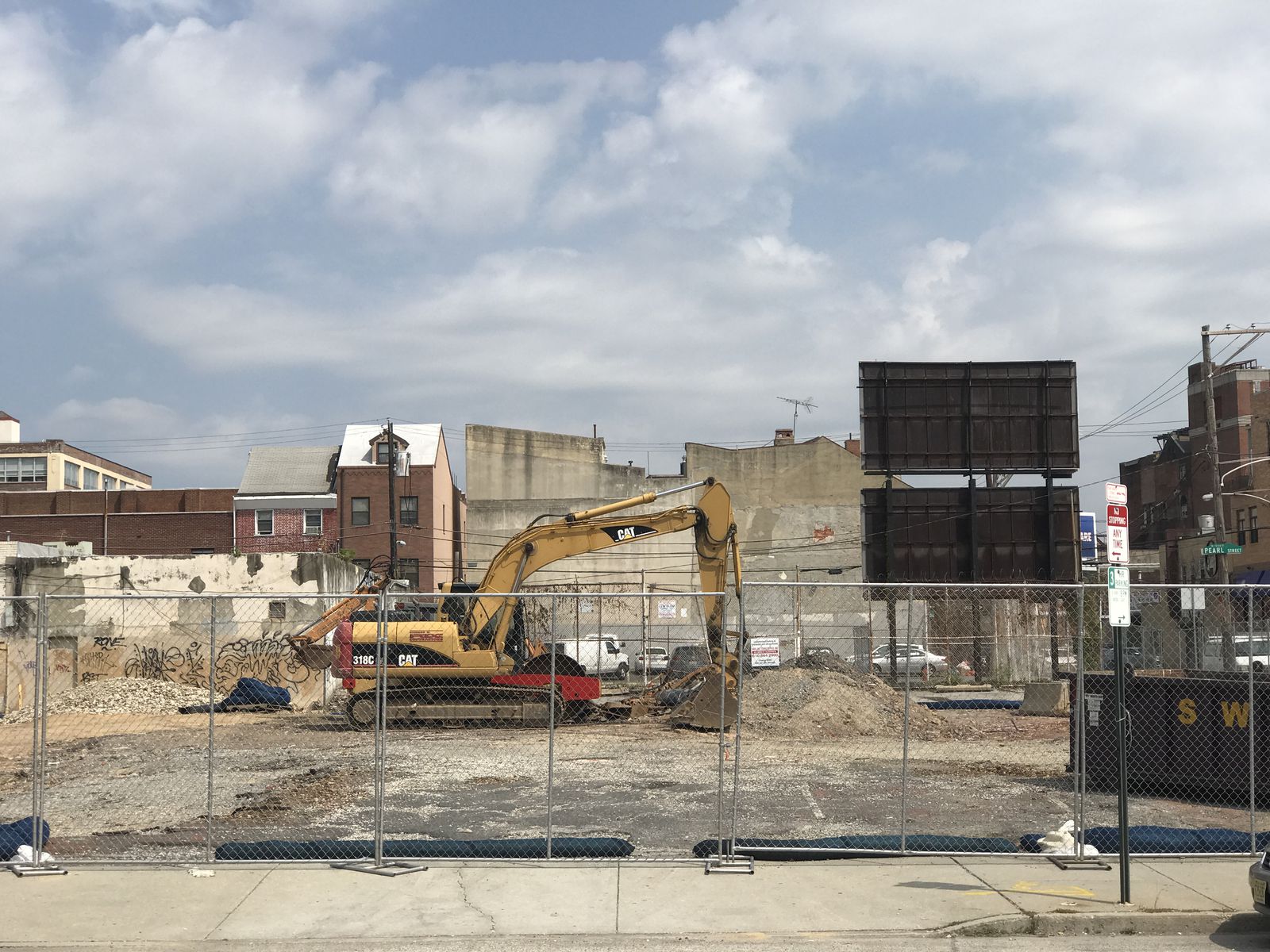 Rendering by Studio Agoos Lovera
Photo by Melissa Romero and