The long transformation of a Fishtown carriage house

Just two years ago, Michael Meyers was standing in a near-stranger’s back yard in Glen Gardner, New Jersey, contemplating the meaning of a chopped-down apple orchard stuffed in a chicken coop.

The orchard’s wood planks stretched out in front of him, thick and wide, with raw edges. When the owner poured acetone over one board, its winding, dark brown grain floated like magic to the surface—just as it would look when it was sanded and varnished.

That’s when it all sank in.

Meyers was in the early stages of a daunting project: renovating a carriage house on East Girard Avenue that had been out of use for decades.

Meyers wanted to turn the carriage house into a tap house for his burgeoning hard cider company, so he took the appearance of the New Jersey applewood—which a friend of a family member just happened to have—as a sign.

“Let’s get it done before we leave,” Meyers excitedly told the owner at the time. And before he knew it, he was taking the stacked and milled wood home—all 120 planks.

That would be the first of several little miracles during the massive—and time consuming—renovations, many of which Meyers and his friends undertook on their own.

The Kurant Tap House opened this summer, with designs by JKRP Architects. It boasts a rustic-industrial look, with a concrete floor, exposed wood and brick, and wide windows. The finished applewood now sits as the top of the bar, varnished and shining. Right behind it, Meyers serves Kurant hard cider, a brand he formed only four years ago with his business partner Joe Getz.

Despite its polished look now, the bar has come a long way since its hectic beginnings.

It was his mother who best summed up the spot when she first stepped inside shortly after the purchase.

“She said ‘I can’t believe you bought this,’” Meyers remembers now, with a laugh. But according to Meyers, her shock was not unwarranted.

“I had this vision with the place”

But the building had fallen on hard times in recent years.

When Meyers first visited the space in 2016, a punching bag sat in the corner, PVC piping lay upstairs, and random pieces of lumber were scattered about the floors. Old, burnt-red barn doors marked the front of the space and opened out to the street. Above them, the second story facade had seen one too many layers of paint. The latest color was a sickeningly bright turquoise.

But Meyers knew there was potential to the long-overlooked building.

“I had this vision with the place,” he said. It was details like the exposed wood ceiling beams and the barn doors that caught his eye, specifically. He envisioned a bar that would open out into the street, with an indoor-outdoor feel.

“It had the bones, it just needed new guts.” 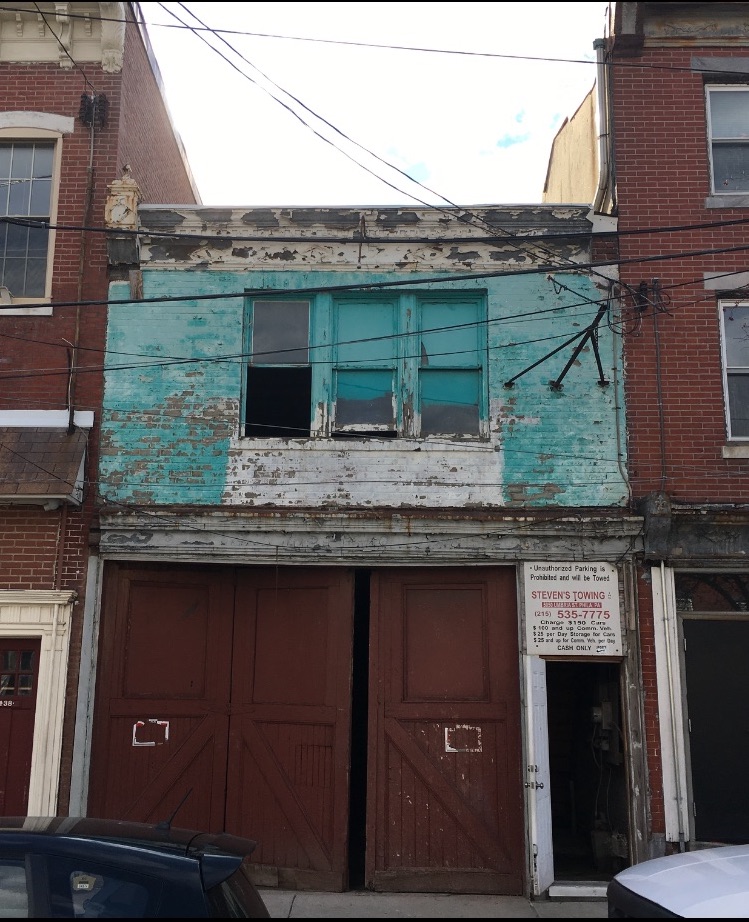 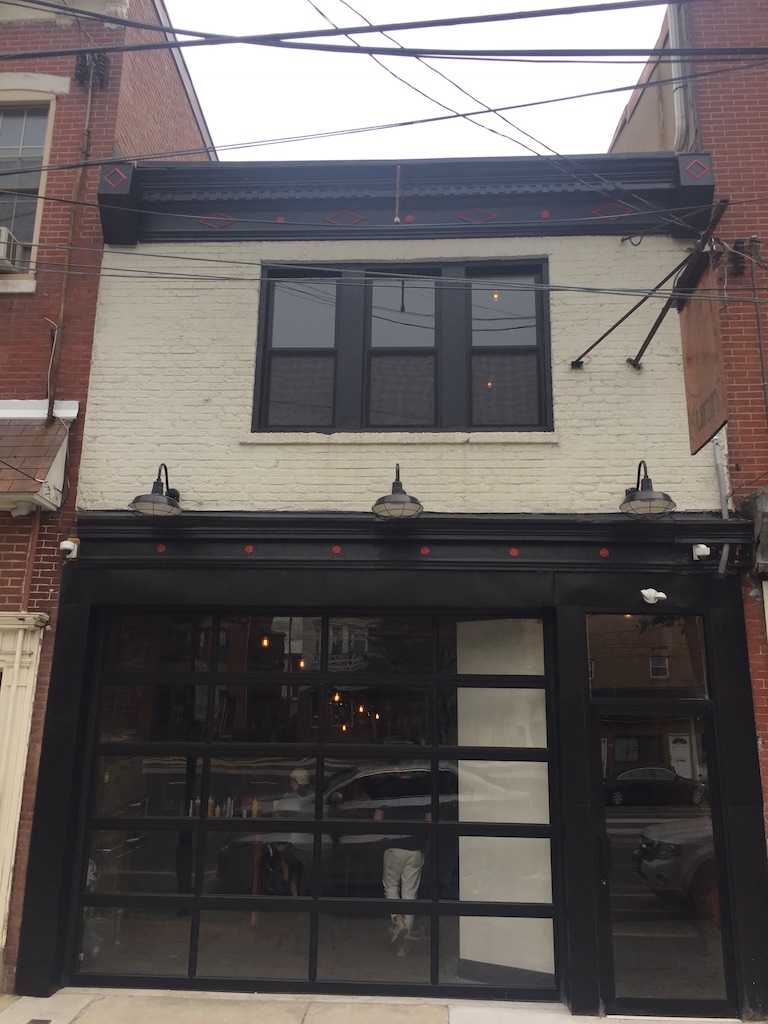 The Kurant Tap House facade, before (left) and after (right)

Meyers aimed to do several things with the renovations. Initially he wanted to bring in a contemporary feel to the space. With help from his friends, Meyers took out the worn front barn doors and replaced them with large, glass, garage-style doors. The applewood was sanded, varnished, and set up as the bar top. The remaining wood adorned the cabinets and shelves behind the bar. They brought brewing equipment to a small glass room in the back of the first floor, so guests could watch them try out new ciders.

As the renovation process continued, Meyers and other workers came across historic details and decided to combine their modernization with restoration.

Upstairs, they found one of the side brick walls lined with wrought-iron diamonds, each with a hole in the center. Meyers suspects these are anchor plates, set up on the exterior walls of the neighboring brass foundry to provide additional structural reinforcement (a common element in many 18th and 19th-century buildings).

They also found the pulley system on the second floor, left over from the building’s carriage house days, when bales of hay would be hoisted upstairs.

Meyers decided to restore and feature the elements across the space. They now sit on the second floor, little clues to the building’s former life.

But along with decorative elements, the building’s long history brought hurdles.

“It had a lot of challenges because of the age and neglect,” Meyers said. 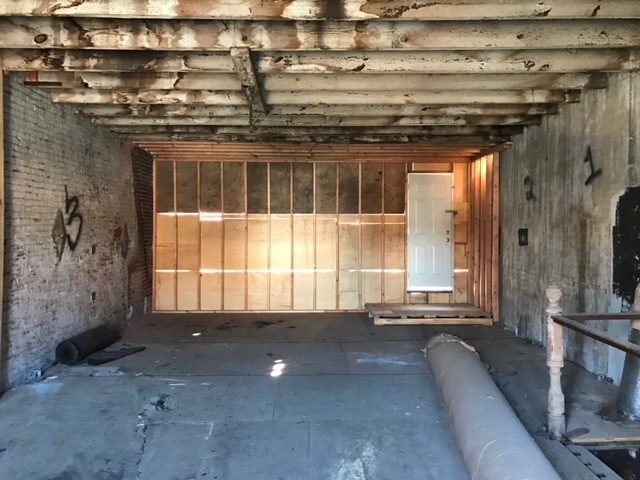 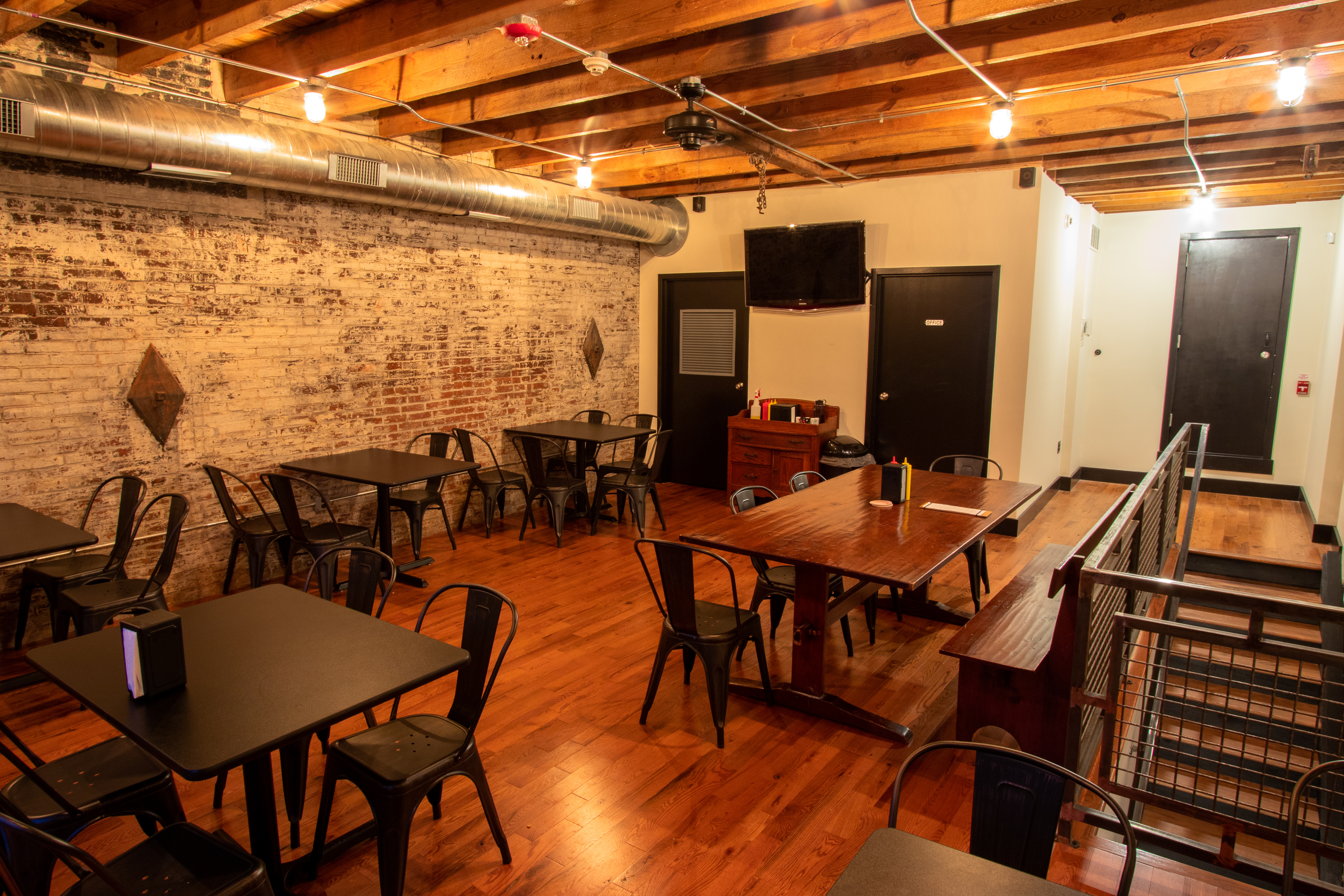 The second floor before (left) and after (right) renovations

They ranged from small—a glass door planned for a back room was too big to fit through its own doorway—to big—the whole concrete floor sat at a slant.

Still, with every problem came a solution: bring the glass door to the front. Rip up the entire floor.

It was a daunting process, but one that Meyers took in stride. Those panic moments—and their sigh-of-relief resolutions—have now become lore, embedded into the brick and concrete and exposed beams of the tap house. 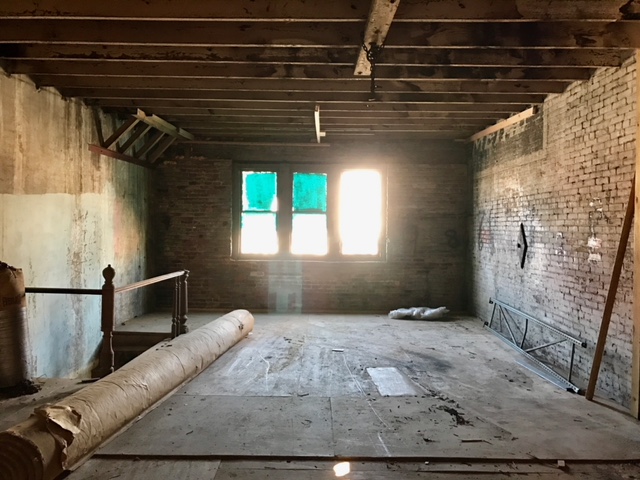 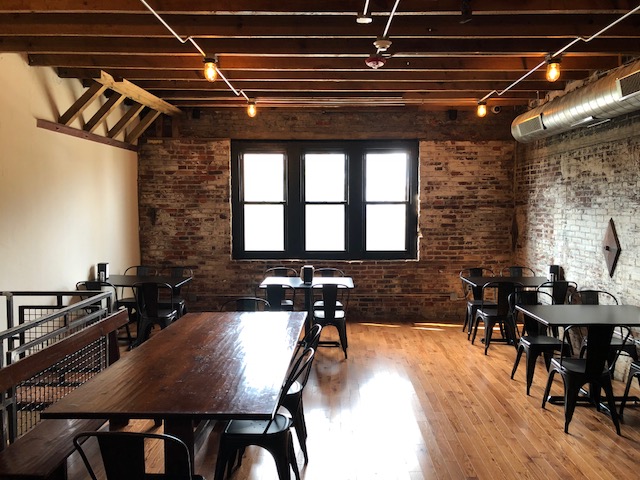 The second floor before (left) and after (right) renovations.

No renovation story embodies that more than the stairs.

After the concrete floor had been poured and polished, after the quarter-inch of paint chipped from the walls to expose the worn brick beneath, and after the second floor had been renovated for dining space, there was still the problem of getting upstairs.

When the wood and iron staircase they’d ordered arrived, it was in one piece, unable to be taken apart and set into the wall as they had anticipated. For hours they tried to hoist it up, lean it against the second floor, or even a rafter, then secure it in place, but it was a near-impossible task.

Desperate, the group went to a neighbor, who let them look through his garage. Amid the random odds and ends stuffed into the space, Meyers pulled out an ancient-looking wooden pulley.

With no clue whether the pulley would work or not, they secured it to the rafters, strung a rope through it, and pulled the staircase up to sit on the second floor, where—miraculously—they were able to get it secured.

Now, Meyers points proudly to the pulley, which he left hanging from the rafters, a subtle symbol of what it took to bring Kurant’s tap house to life.

On a recent late-summer Saturday, as the fall sets into the trees and empty lots near the end of Girard Avenue in Fishtown, Kurant Tap House is hopping.

With the cool summer air, Meyers has rolled up the doors at the front of the bar. A group of 30-something friends stands around, laughing and spilling out onto the sidewalk. At the end of a long table, a woman reads a book while enjoying the rosé cider. Getz comes out from the back with a new brew he’s trying out for fall, leaning his body over the bar top and handing a mini mason jar to Meyers with a simple, “give this a taste.” They even have an award under their belt already. Just this year they won the Storefront Challenge’s Wine and Spirit award, given by the city for the best bar facade transformation.

It’s all exactly what Meyers had hoped for.

“I couldn’t be happier with the situation that ended up out of this cool old building. For someone who hasn’t gotten to do this before, it was a dream to do it,” he said.

Now, the once-rubble-filled room is complete with a polished concrete floor, and a 34-foot-long wood bar top. There are exposed beams and brick walls, metal stools, and wood-and-brick shelving behind the bar.

On those shelves—Meyers proudly mentions this—are all locally based liquors, wines, and beers from Conshohocken, Kensington, and suburbs around Philly.

“We support local and we are local”

Even the decor, which is minimal, has a personal touch. A milk jug from Meyers’ own family—former Ambler dairy farmers—sits in the entryway. Upstairs, he points to a long wood table that was once his mother’s.

“This table has seen 28 Thanksgivings,” he laughed.

All those little things, contribute to the bar’s larger message. They’re a site with history, sure, but now renovated, they’re looking to become a little piece of the neighborhood.

“We support local and we are local,” Meyers says.

Meyers’ story is a tale of history and renovation, but it’s also a tale of the future.

Tucked away at the end of Girard Avenue, a 10-minute walk from the MFL stop and the ever-popular haunts like Frankford Hall and Garage, Kurant is part of Fishtown’s growing nightlife and commercial area.

Emily Dowdall, a researcher for Reinvestment Fund, who formerly studied gentrification while working for Pew Charitable Trusts, compares Fishtown with its neighbors like Northern Liberties and Kensington. When deindustrialization hit in the early to mid-1900s, those neighborhoods suffered, leaving behind massive empty plots of land.

Such was not the case in Fishtown, Dowdall said.

“There was some degree of vacancy but not the kind of depopulation you see in other neighborhoods,” Dowdall said. There were still longtime businesses in the area, and Fishtown was largely residential, which likely made it more open to new developments.

“It wasn’t a blank slate in any way,” Dowdall said

Property records of the neighborhood around Kurant support Dowdall’s point. In the 1960’s records show a Motor Freight Express Company on Palmer Street and a company called Electro Carbon MPG on Columbia Street. But apart from those, and other small businesses like them, most of the plots of land are residential spots.

Now, that stretch of Girard is lined with cafes, bars, shops, restaurants, and residences.

There are several factors behind Fishtown’s resurgence over the last decade or two. But one factor that Dowdall points to is the uptick of “key developments” that moved into the area, like the neighborhood staple, Johnny Brenda’s, a bar, restaurant, and music venue, that set up shop at the now-popular Frankford Avenue intersection in 2003. Another factor Dowdall notes is Frankford Hall, a German-style beer garden run by Stephen Starr that opened just north of Johnny Brenda’s in 2011.

It was those trusted names and popular venues that opened people up to the idea of coming to Fishtown, Dowdall said.

“It drew interest for people who may not have seen themselves in Fishtown.”

Changes in housing prices reflected its development. A recent analysis of residential sales, provided by Dowdall and based on data from the Philadelphia Office of Property Assessment show a nearly 20-year trend of increasing housing prices in the neighborhood.

In 2000, the median Fishtown house went for almost $33,000, substantially less than the average Philadelphia house, which went for nearly $55,000. But the cost of Fishtown homes crept upward.

Now, the difference is stark. The median Fishtown home went for $247,000 last year, over twice that of the median Philadelphia home, and the prices for the area are still rising.

As for Kurant, and other bars and restaurants that line the west part of Girard, Dowall says there’s no telling when the saturation point for that kind of business will hit.

For now, the renovated carriage house on East Girard sits with a foot in several worlds. There’s the constant presence of old Philadelphia history in its worn beams, painted brick, and 1900s pulleys. There’s the much more recent past—its renovation and its rebirth in the bourgeoning craft beer and cider scene in Fishtown. And there’s its future, sitting on the less developed stretch of Girard, an indication of the neighborhood’s continuing growth, and maybe, what’s left to come.

How to Avert the Next Housing Crisis

View all stories in Longform
Philadelphia