After years of fixing up homes throughout rural Pennsylvania and abroad, RoseAnn Hill had the itch again to renovate. Only this time, the home she fell in love with was in Philadelphia, and at 776 square feet, it was the smallest property she’d ever taken on, with the help of local architect Timothy Kerner of Terra Studio. Now that the renovation of this Queen Village Trinity has finished up, this final installment of Renovation Diaries is ready for its big reveal. See how the home shaped up, in before-after photos. 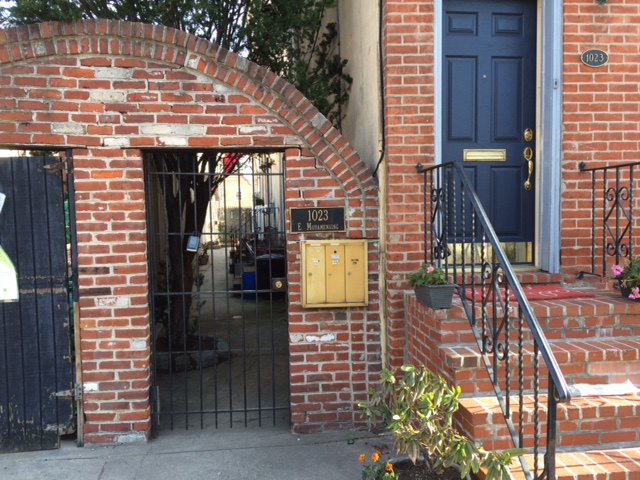 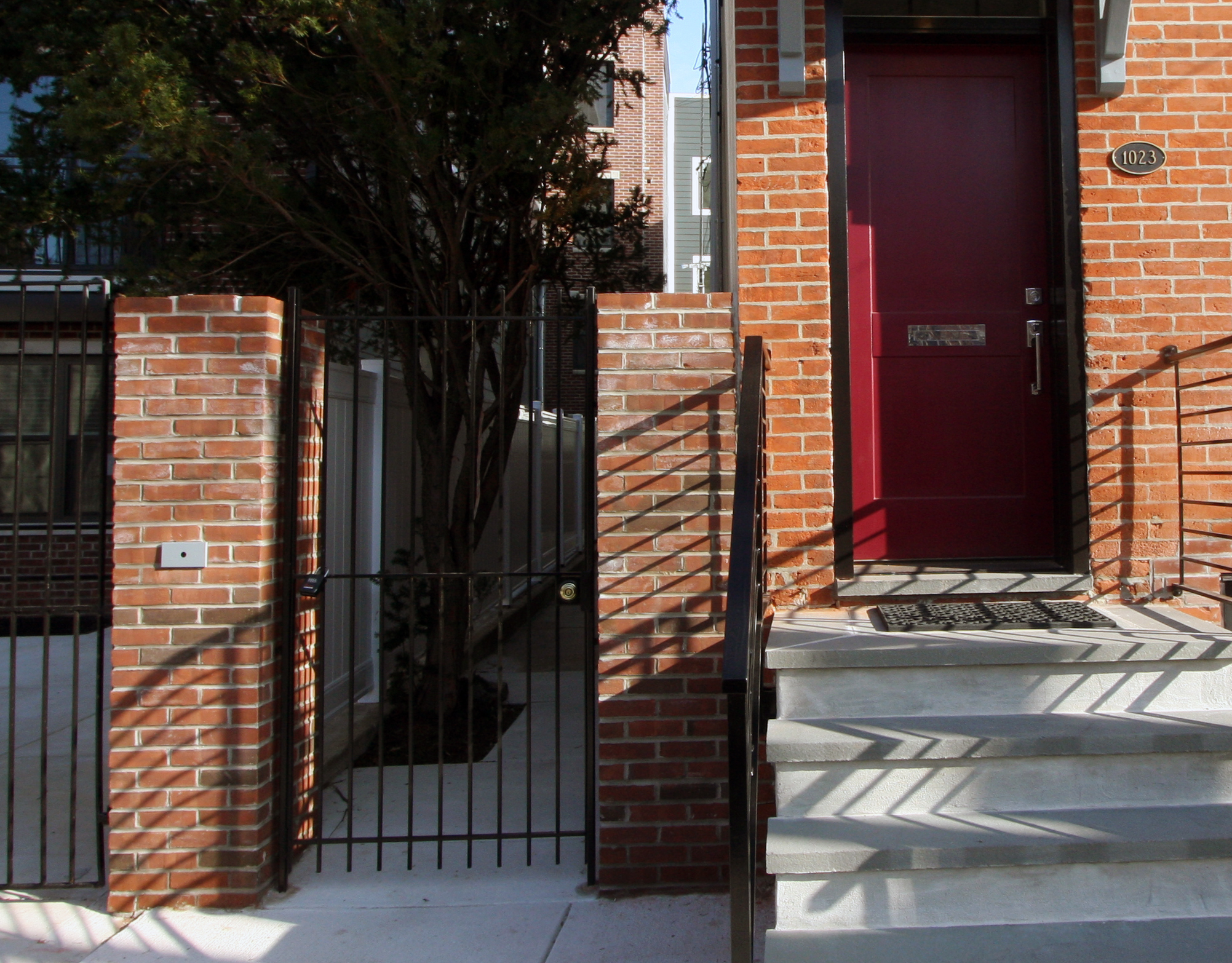 Photo by Tim Kerner and Photo by Melissa Romero

The facade of the Trinity was in pretty good shape, but the stairs and the railings had to be replaced. The front door was replaced for something new, too. Hill says, “Tim first asked me if I wanted a black door. But then he asked if I’d consider burgundy, and I was feeling a little jazzy that day. Why not? I actually really like that it’s a little different from the other doors on the block.” 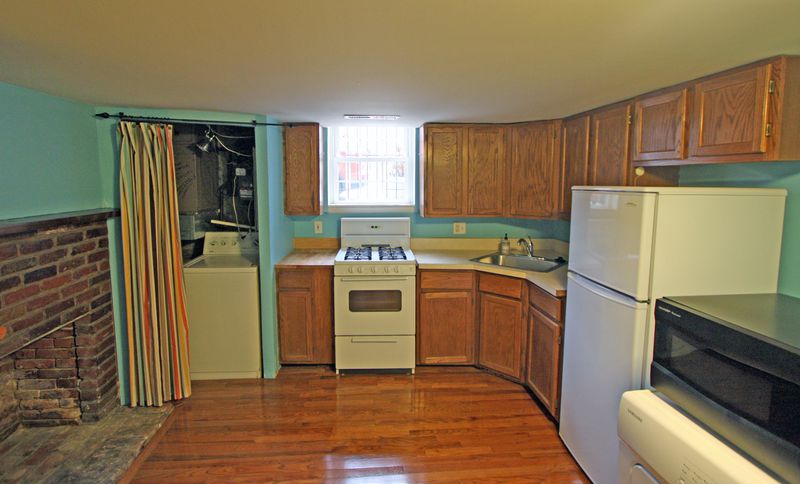 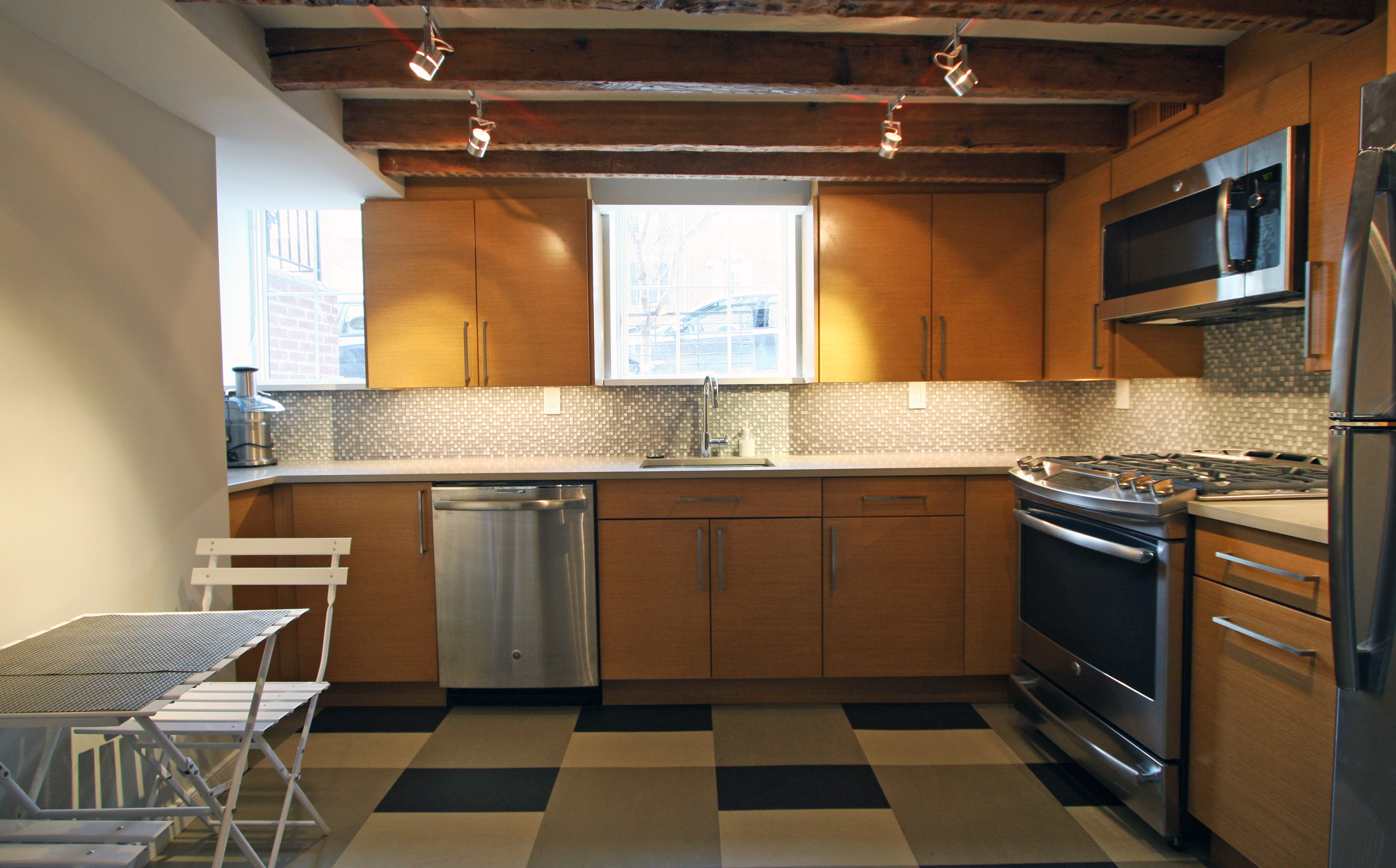 The kitchen in the basement underwent one of the biggest transformations. The fireplace was covered up, and is now sandwiched by more counter space and storage. Same goes for the utility closet, which was moved to the other corner of the kitchen and replaced with more cabinetry and counter space. The original ceiling beams are also now exposed, adding some more character to the kitchen. 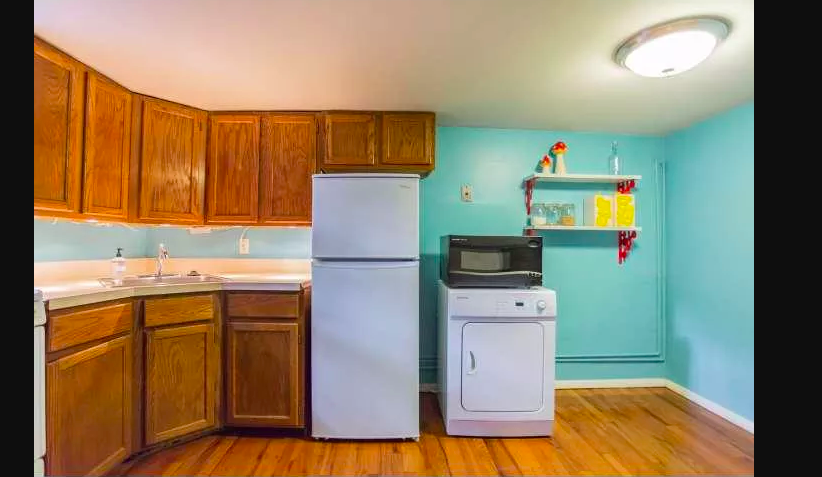 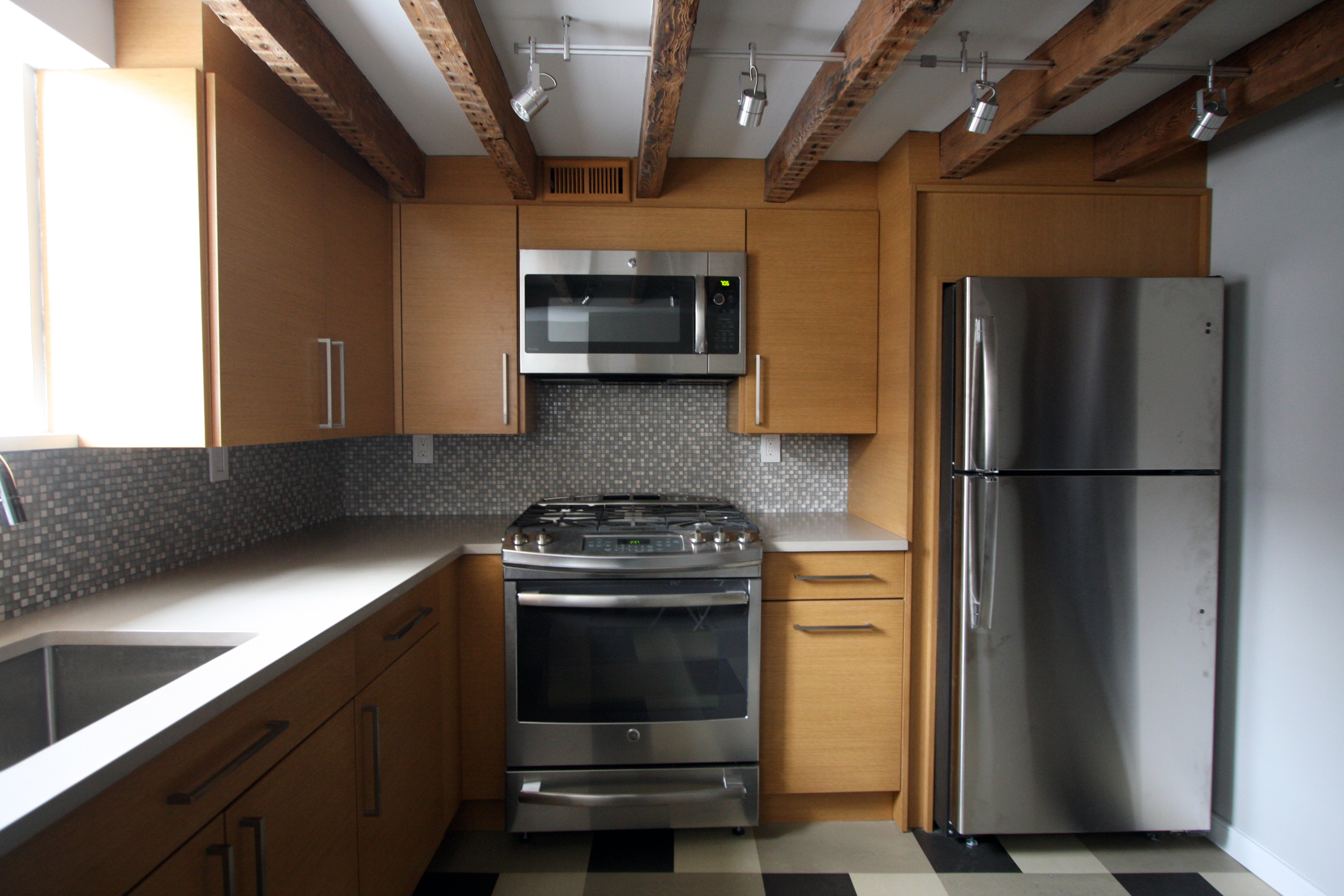 via Houwzer and Photo by Melissa Romero

“The kitchen floors were kind of nondescript, three-quarter-inch planks that we had planned to keep,” says Hill. “But when we did the cabinets and took the gas and electricity out to move to the corner, it didn’t make any sense to patch up so many spots. The floors kind of to the point where it didn’t make financial sense to cut and paste—it made more sense to put a waterproof vinyl material down.”

“I love that product because not only is it waterproof, but it has a clean look and has some style. Plus, it’s easy to maintain and it’s very forgiving. And because the kitchen is technically in a basement, I like the idea that it has some sort of a water barrier versus wood.” 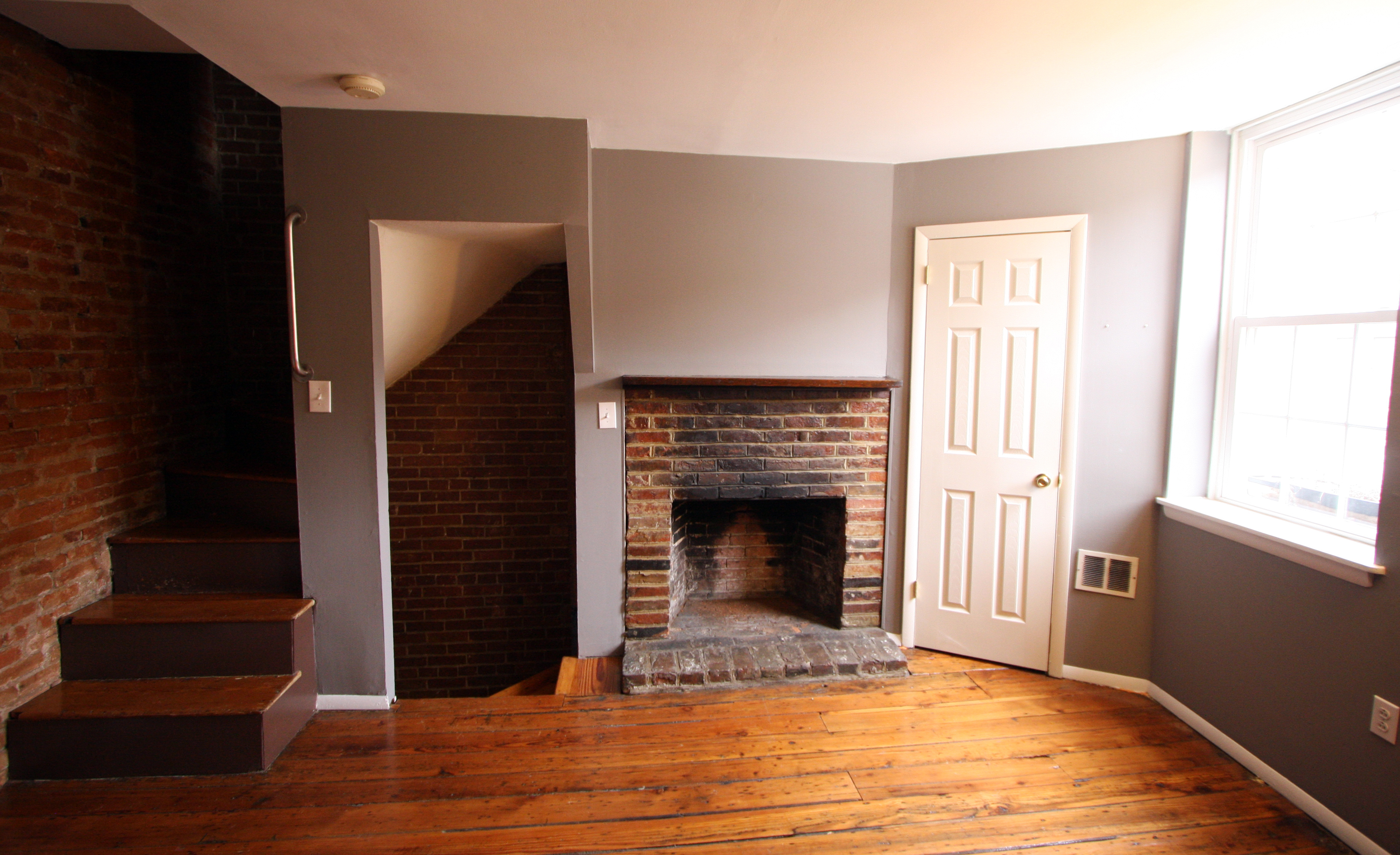 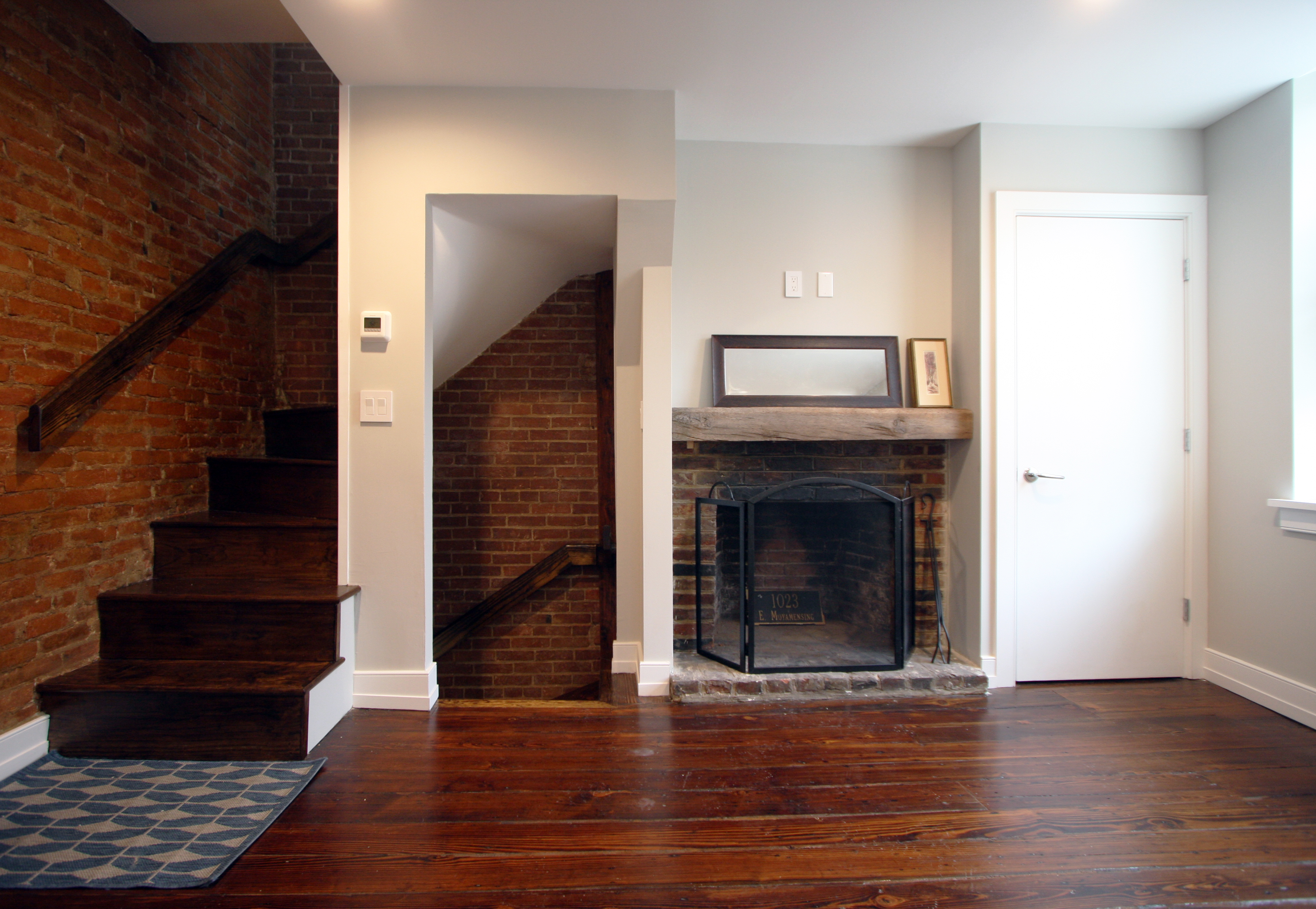 The living room on the second floor didn’t go through too many major changes. The floors were refinished and the fireplace now has a new wooden mantel. An extra window was installed on the other side of the room, too, bringing some extra light into the space. 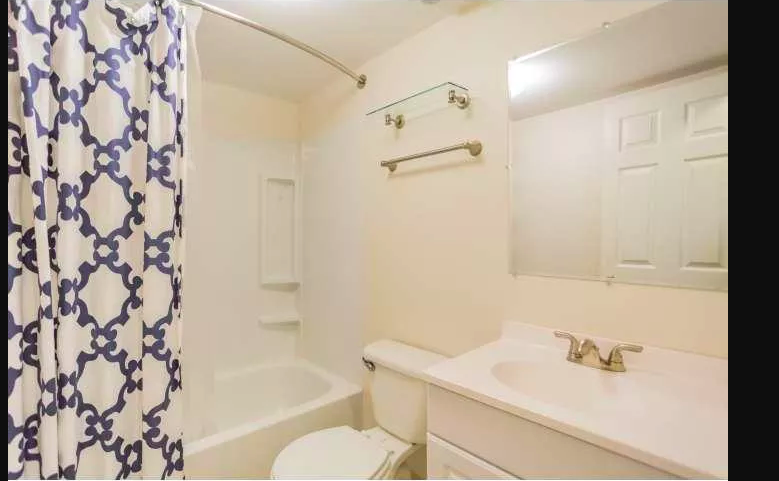 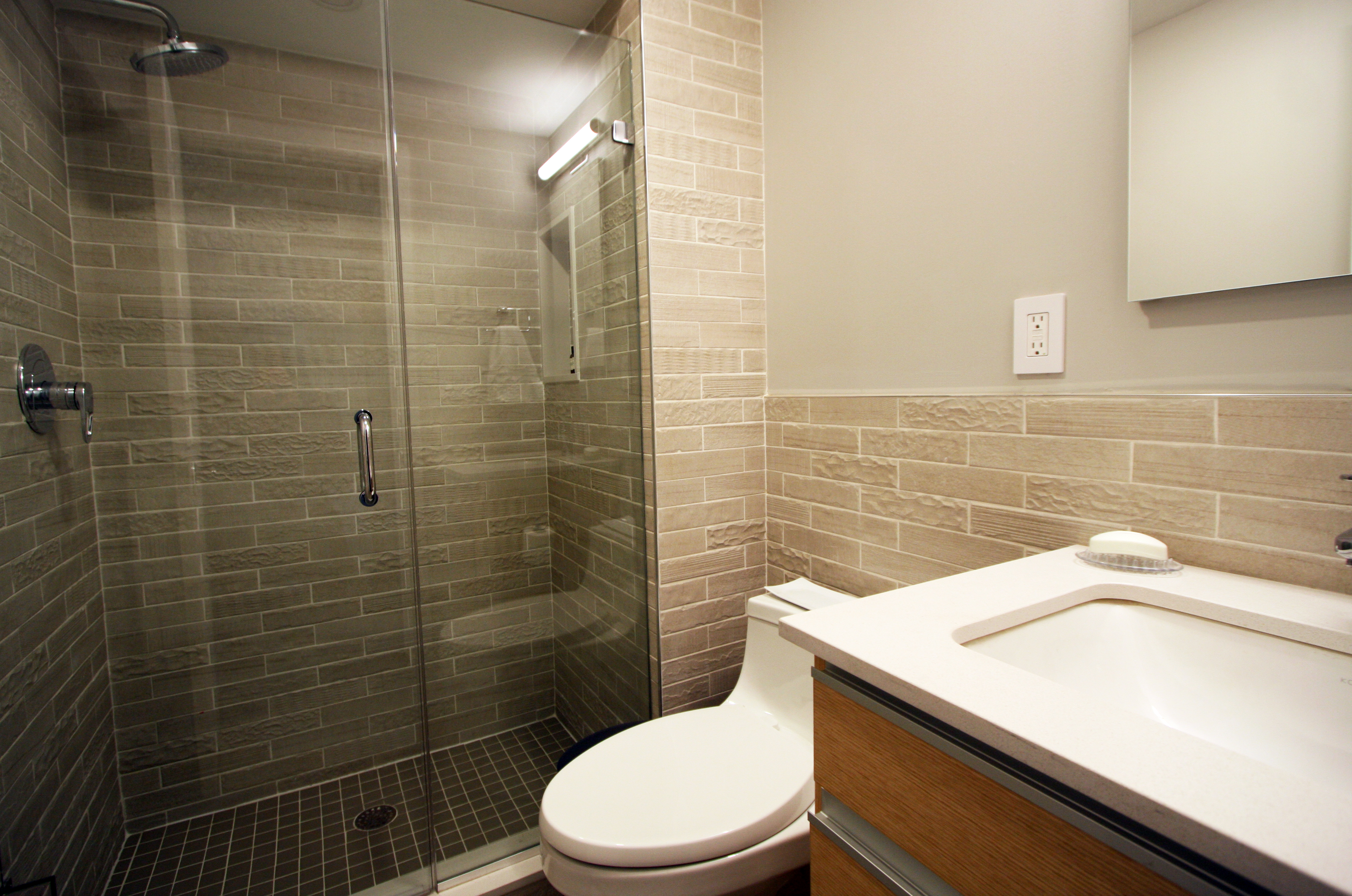 Courtesy of Houwzer and Photo by Melissa Romero

The bathroom was complete gutted, replacing the tub with a shower stall with a glass enclosure. Although the bathroom tiles ended up having a bit more texture than planned, but Hill says, “It’s something down the road to consider, but it’s pretty small potatoes when you’re taking on a big renovation like this.” 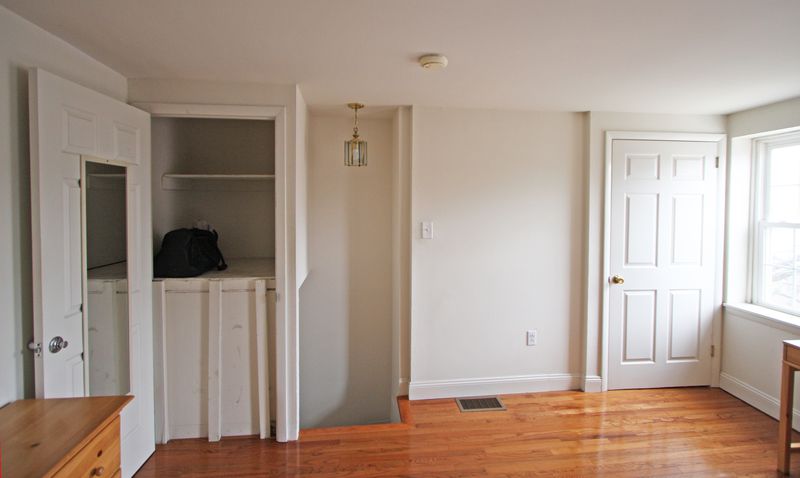 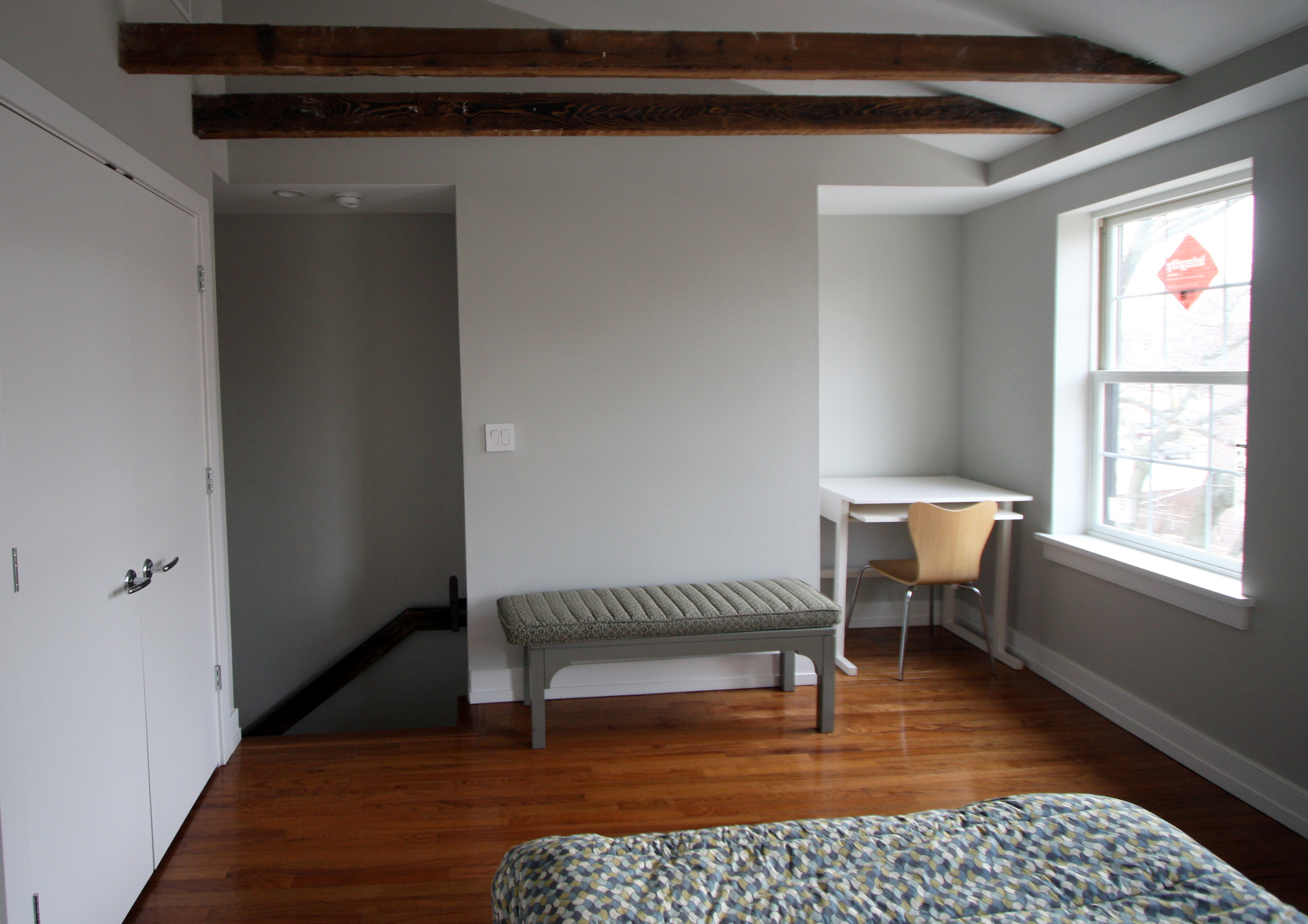 Like in the kitchen, the original wood beams in the master bedroom were exposed and restored. Architect Kerner got rid of the awkward and small closets sandwiching the staircase, and instead added a wall of closets to one side of the room. One of the original closets has been turned into a nook, big enough for an Ikea desk. 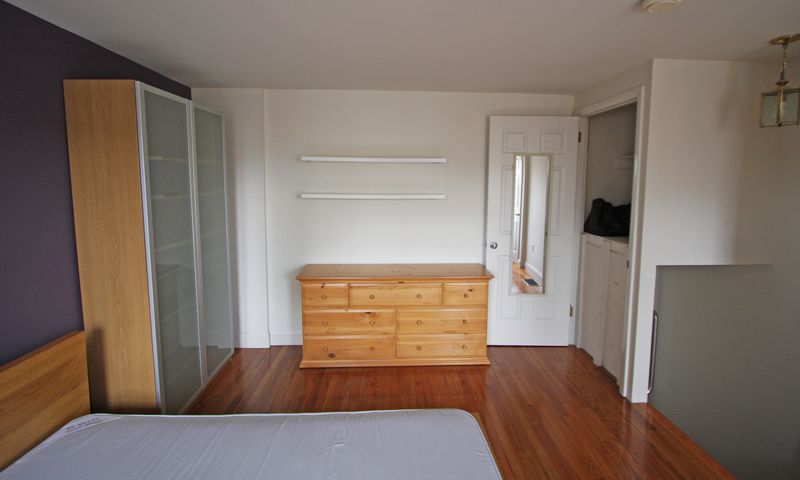 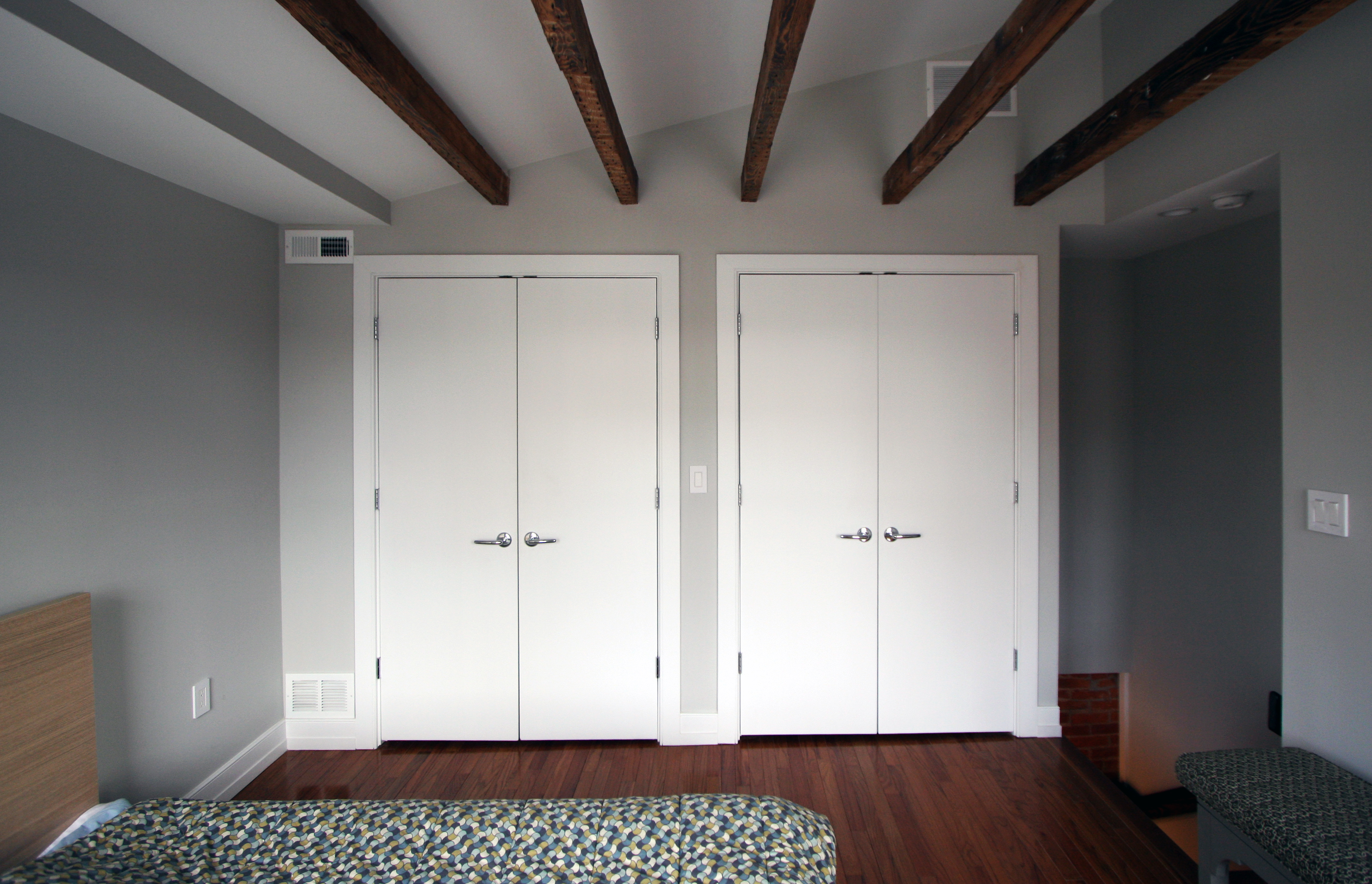 What I learned about renovating a Trinity

“I feel like my personal situation with this renovation has been so fortunate because I got the right architect [Tim Kerner], and contractor [D’Antonio and Bongiovanni]. One of my biggest pieces of advice is to keep a really good, strong relationship with your team. Keep that communication open and expect that things are going to change—but that doesn’t mean for the worse.

“But the bottom line is that I don’t feel like I was the expert on any of the aspects of the renovation. I can’t take credit for one thing—it was all Tim, Rob, and Marc. They did the lion’s share of everything.”

2. Stick to the game plan

“Also, I think it helped that I didn’t make any changes to orders or demands once the construction process started. Really do your homework, make your decisions, and be clear about what you want up front. Once the renovation starts, it is not the time to go in and tap them on the shoulder and say, ‘Can we do this, too? Can we do this instead?’ I think it was really helpful that we stuck to the original game plan.”

3. Prepare for some setbacks

“The final numbers still have to come in, so I don’t know exactly how much I’m over, but I’m still in the ballpark. I’ve worked on a lot of renovations before, so I expected to have some extra financial cushion going into this. I told my husband, ‘Whatever numbers are on the paper are never the actual numbers you end up with.’ It’s the nature of the beast—the number changes, the time frame changes.

“Of course, I was in a different situation than most people. If this was my primary residence, or if I had to pay rent somewhere else, I might’ve been a raving lunatic at this point.”

4. Get to know your neighborhood

“It was never that I wanted to take on another project. From the beginning, I felt that the location was really important and that the actual unit was a separate entity—not a condo.

“Now, Philly is feeling more and more like a small town. Just the other day we went to eat in the Italian Market and ate this big, humongous dinner. It was so good that we went back the next night and had the same waitress, and we just talked about what what a nice little place this is.”

5. Know that designing small spaces comes with some headaches, too

“My impression of Trinities is that those small spaces are very difficult to work with. Putting that puzzle together in that small space comes with its own set of headaches, from parking to how to get the kitchen counters in.

“But it’s still an entire house. It’s tiny living, but it’s mine.”